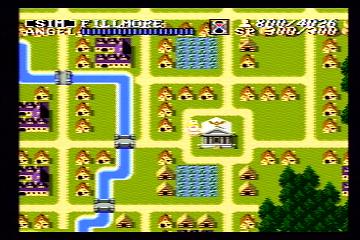 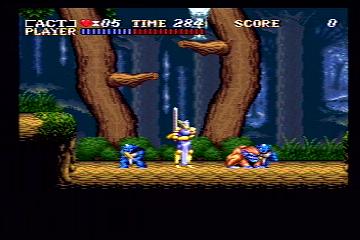 Ice cream and mustard. Cake and pickles. Pizza and chocolate. There are some things you might like both individually, but mixing them isn't a very good idea. Action and Simulation... Hmm... It could work.

Actraiser isn't so much one specific game, as it is two almost completely different games, welded together. It's a SimCity-like town simulation game, where you're trying to build a town, while protecting the people from the random (and frequent) monster attacks. Then, it's a Castlevania-like action game, where you're making your way through a stage, fighting off enemies with your sword and magic, and at the end of a level have a boss to fight. How do these two completely different games mesh together? In Actraiser, you are the creator of the land, but your power has been sapped by an evil force, and your land destroyed. Your goal is, with the help of your little angel friend, to rebuild the land, fend off the enemies, and defeat the evil force. When the game begins, your first task is to take care of a number of monsters in an area so that you can begin rebuilding the land. So, you descend into the monsters lair, and, in an action segment, work through the level and defeat the boss at the end. Once this is completed, you can now begin work on the land.

After clearing the land, the simulation mode begins. Here, you take control of the angel, and direct the people in their building. The town starts with only two people, but, as you expand them out, the population grows. You do this by, from the starting square, selecting a square of land nearby to build. The people will run over there, make a road, build some houses, and the population will grow. You continue expanding your town outwards, over the available land. As you expand, you'll run into a number of small monster lairs. From these lairs, monsters will be coming, and, if left on their own, will go over the village and destroy it. With your angel, you have a bow you can shoot at the monsters to kill them, but they'll keep coming back as long as the lair is there. So, along with building up the population, your other goal in the simulation mode is to expand the town over toward the monster lair, and when the people try to build on a square with a monster lair, they will go over and seal it up, stopping the monsters from coming. As you continue the simulation mode, once you've had your people seal up all of the monster lairs around town, the monsters will stop coming to harass your people. They will, however, find a main source a trouble, which you will have to come down and destroy as you did at the beginning of that town. So, down you come again, through another action segment, and defeating the boss at the end. This is how the game progresses, as you pass through the many towns. At the beginning, there is an action segment. Then, you work through the simulation segment, building up the population and clearing the monster lairs. Then, after you finish clearing the lairs, you head back down to destroy the final monster area and free the town from all of the enemies.

There's more to say about the simulation segments, however. The first question you may be wondering is, what's the point of building up the population? Why even bother with the people, why not just clear the lairs as quick as possible and move on to the next town? Well, the first important part is, all of the town's populations get added to a total world population, and as the population passes certain marks, you gain extra life for the action segments, similar to "leveling up" in an RPG or such. So, while you can go with the bare minimum on population, it always helps to increase it when given the chance. The other reason is, as the people wander across the land, they'll find or discover gifts to give you. This can be as simple as a bomb to destroy enemies with, to something like the ability to build bridges. In some cases, you'll need to leave a town until later, and then come back to share another town's gift to them. A town might not be able to expand over a river, but then when you get a gift from another town of the ability to build bridges, you can bring it back to them to share, and they can now build over water. There are many other gifts which can be shared across towns like this, and leads to further expansion and increased population. Not to mention, once you've cleared all the monsters from an area, you don't have to worry about the people being attacked anymore, so you can expand without fear. As well, since all the towns are next to each other on the world map, if you have the people build over to the edge of their town, they'll build a road connecting to the next town. There are a number of little intricacies to the town building like this. While your interaction with them is limited to just choosing their building direction (there's no placing power plants or anything like that), it can still be very fun just trying to squeeze out a few more people in a given town.

The action segments, although they were presented earlier in this review in a rather bland straightforward manner, are definitely not just randomly stuck in there, the second battle in an area always has a reason behind it. As you're building the town, the people will come and talk to you about their problems. Some of them may be insignificant, but, one of these problems will also lead to the second monster encounter. It could be something as simple as discovering a haunted tree, to a family having their son kidnapped and you needing to rescue him. Each town has its own individual goings on and story pieces as you're building them, which give you a sense of meaning to the action segments. The game doesn't exactly have a huge gripping story to it, but, it's more than just your random "battles for the sake of battles" type of action game, since the simulation mode gives you reasons behind the battles.

Graphics in the simulation mode aren't too much to speak of, just a map screen, with little dots of people moving around building their small houses. The enemies look nice enough, but, aside from that, it's nothing too special. In the action mode, the graphics are fairly impressive, with some nice environments, as well as some nifty effects with spells and water and other such things. Sound in the simulation mode is basically just a calming background music, again nothing too out of the ordinary. Sound in the action segments, again, is very good, going through a number of different background musics for the different area, fitting the mood very well.

As far as length and replay go, if you decide you don't really care about building up your populations and just try to get through the action segments with whatever health you have, the game could be over fairly quickly. If you decide, however, to try to maximize the populations in towns, it's a nice little challenge. There are about half a dozen towns you'll get to build, and around a dozen or so battles you'll have to deal with. Overall, it's not exactly an epic quest of a game, but, the simulation mode adds some good length to the game if you desire to pursue it. The action modes can range from very challenging to fairly moderate depending on how much time you put into the simulation mode and how much health and other stuff you got from it. Even once you beat the game, there's always the challenge of going back through the towns, and trying to squeeze the last bit of population out of them.