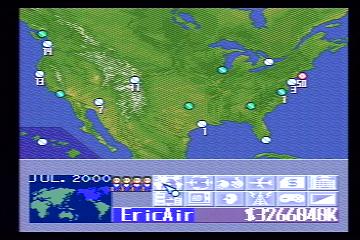 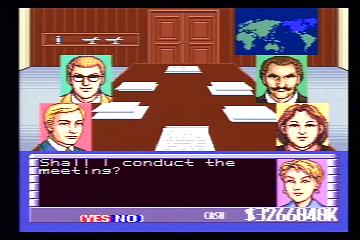 YouÆve always wanted to have your own airline company, havenÆt you?
The thrill of ordering up a dozen brand new, state-of-the-art planes, dispensing them to cross-country routes, setting affordable fairs, and watching as the people happily pile in. Or, feel the seething anger as your budget-line route is only getting filled to 70% capacity on a daily basis, youÆre taking losses, and you donÆt know what to do about it.

Aerobiz Supersonic is the game for the multi-national businessperson in all of us. In this game, youÆre provided with your own airline company, and you can choose from a number of different possible starting cities, and where you decide to start will affect how much initial starting money you have, how easy it will be to provide access to other places, and other things like that.
You also have the option of starting your game in 4 different time periods, from the very beginnings of airline travel up to current-day. Depending on which time period you choose, youÆll have access to different planes, costs will be different, and many other variables. The world is broken up into 7 regions (North America, Europe, Oceana, etc.), with each region having a few major cities, which are the possibilities for your starting city, and a number of smaller cities, which you arenÆt given the option of starting your company at, but once itÆs up and running you can have flights going there.

There can be up to 4 human players, and any slot that isnÆt filled by a human will be controlled by a computer.
Each person takes a turn, doing whatever they can and need to do during their turn and then selecting to end their turn, at which point the other people will take their turns and once everyone has taken a turn, three months will pass, things will happen, and it will go back to the first person.
You have 4 people at your disposal, who can give you small pieces of advice when you need it, or, more importantly, can be sent out to do tasks such as opening business ventures in cities or bidding for "slots."
You start off with a few slots in some of the cities, as well as a bunch in your starting city. In order to send flights from your central base to a city, it will cost slots both at your central city and the city the flight is going to. So, if you need to get slots somewhere, or need some more slots, youÆll have to send out one of your people. It will take time for them to bid for slots, so, once you send out your people, youÆll need to let time pass waiting for them to come back.

Once you have the necessarily slots and find a flight route you want to open, youÆll need to check out the distance between your home base, which is where all flights must originate, and the place your flight is going to. Find a plane that is capable of traveling that distance, as well as deciding on factors such as how big of a plane you want on that route, costs associated with running that plane, as well as the fair to charge for that route, and when youÆre ready, set it in motion.
YouÆll receive statistics on how many people are riding your planes, how much profit or loss youÆre taking on each flight, as well as being able to see where any competitors have routes going.
If you have competitors in the area, you may have to lower your fairs and provide nice planes to convince people to fly on your airline. If youÆre the sole person providing service over a certain route however, and people are happily riding your flights at full capacity, youÆre free to be the monopolistic villain youÆve always wanted to be, and push the fair up to ridiculous rates, as people have no choice but to fly with you. Mwahahaģ err... yeah.

In many of the cities there are also a variety of business ventures you can look into opening, such as an amusement park, travel agency, hotel, or shuttle service to the airport. Opening services such as these will make people in those areas more friendly towards your company, and more likely to ride your planes. So, if youÆre facing some stiff competition in an area, as opposed to lowering fairs so youÆre taking losses on the flights, you could try opening things such as those in an effort to draw in more customers.

If you want to expand your company into another area, such as from North America to Oceana, youÆll need to have a flight going from your central base in one area to a major city in the other. After you have a route going there, you can send someone to make that city your central base for that area. Once you do that, you can have routes going out from that city to others in the area.

As far as graphics and sound, thereÆs nothing too spectacular in either area, most of the game is accomplished through just menu and map selections. ThereÆs little animations such as a plane taking off when you open a new route, but that can just be a hassle and you can turn it off. ThereÆs a different background music which plays in each of the different areas, so thereÆs some variety there, but still nothing overly special. The graphics and sound both accomplish what they need to, but not too much more.

Overall, Aerobiz Supersonic is a very slow-paced game, requiring a great deal of thought and planning. YouÆre managing routes, planning business models, and trying to run a successful company.
While this might seem boring to most people, and for those people obviously the game wonÆt be of much interest, if this is the type of game that one likes, itÆs a very interesting game.
There are many different possibilities for play, with the four different starting time periods, as well as the dozens of different possible starting cities. Playing with friends, or against the computer, the game is always very fun and entertaining.