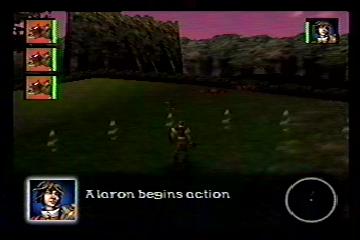 The first thing to note about Aidyn Chronicles is, it's going to take a massive time commitment on your part. This isn't just the type of game were you can put in a bit of time, cut corners, and finish quickly. At a bare minimum, figure to spend at least 70 hours in order to beat the game. That's with cutting corners and skipping extra stuff though. If you actually take time out to explore, do all there is to do and everything, it's going to easily be over 100 hours, possibly quite significantly more than 100 hours. So, if you're not prepared to put that kind of time into a game, turn back now.

Ok, if you're still reading now, hopefully you're willing to put that sort of time into a game. That's good. Of course, before you put that much time into a game, it's probably good to know something about it, and that's why you're here. Aidyn Chronicles is, at its core, an RPG. However, it's much more like your pen-and-paper RPGs than it is your Final Fantasy-types of RPGs. That probably has something to do with THQ having brought in G. Chris Klug (of D&D fame of such games as DragonQuest), to give it a different look and feel from their previous RPG attempt. So, if you're expecting a game littered with movie segments, and where you and your enemies stay rooted to their proper side of the field waving swords at each other, that's not what you're going to get here.

In Aidyn Chronicles, all enemies are visible on screen as you walk around. When you approach an enemy, when you're close enough you'll engage the enemy and move into a battle field. In this field, your characters are placed around, as are the enemies. Each turn you have a certain movement space in which you can move and perform actions. If you're not close enough to an enemy to attack it, you won't be able to attack until you're closer. When you're close enough to attack, various other terrain elements will come into consideration when making your attack, such as whether you're on higher ground than the enemy and other such things. You can also cast spells from a distance to affect the enemy, or enemies depending on the spell. When you kill all the enemies, you will get experience.

This is another area where Aidyn Chronicles differs from most other RPGs. Instead of just gaining experience working towards a "level" and then having your stats randomly increase, here you've given complete control over your character's growth. The experience you earn will be added to an experience bank, and with this you can choose what to "spend" your experience on. Maybe you want one character to be a fighter, and so you'll pour all your points into Strength and a Weapon skill. Maybe you want another to be a Thief, so you'll train them in Dagger use, Lockpicking and Trap Disarming. Maybe you want a Mage, who you'll train in a variety of spells, and give a Bow to attack from a safe distance. Maybe you want every character in your party to have some healing abilities, and so you can train them all in that. Each character starts off with a basic set of skills which you can work to increase. You'll come across people who can teach different skills however, and once you've learned it from them, you can either continue to learn from them (which costs less experience but costs some gold) or train more on your own. It's completely up to you.

When you start out, in the beginning area you will put together your group of four members from five possible selections. As you make your way through the game, you'll come across other people who you can have join your party. One small annoyance is that the game chooses who leaves your party when a new person joins, but, you can fix this yourself by just killing off one of the characters before talking to the new one. Which, yes, is another significant point to make. If a character dies, they're gone. Permanently. This is kind of annoying, yes. The game lets you save at any place you want, however, so you can always just save often (always a good idea anyway), and then if needed restart from a previous save if you really want. These new characters come with their own sets of skills, which, again, you can train further to your liking. The biggest thing to note about the new characters, however, is that they all add greatly to the storyline. You'll see scenes and dialogues with one character that you won't see another. Who you bring with you through the game significantly changes how you experience the story of the game, and is a terrific reason to play through the game multiple times.

Regarding the game's story, it starts off a bit slowly, but definitely picks up toward the end. Near the beginning, it seems a bit silly, running into a "mysterious shadow," who calls you "rehtorb," and speaks of the growing "soahc" (try reading that backwards... yeah, real "mysterious.") After a few silly instances like that, however, the story really gets much better, and really draws you into it. It ends up being very involved, and really draws you into it. As well, you'll run into many people along the way who will do a spectacular job of advancing the story. There's even little touches such as libraries full of old books which will shed light on the story. Some of the books will be written in strange texts, which you might not be able to read all of unless you've trained in certain skills. While you won't miss large chunks of the story if you don't go looking around for all these little things, they definitely add to the overall feel of the game. You really feel as if you're being drawn into the world, looking around for everything there is to do.

One thing to note, is the graphics. If you're expecting to find what seems to be typical in many RPGs lately, fancy movies interspersed every five minutes or so, and fancy (but uninteractive) surroundings, you're going to be disappointed. The world of Aidyn doesn't look "bad" by a longshot, but it's not going to have the "wow effect" that other games do. What makes this game stand apart, is the sheer volume of things. Instead of seeing some mountain off in the distance and thinking "Hey, that's a nice looking mountain. Oh well." You can think to yourself "Hey, that's a nice looking mountain. I wonder what's on it. I think I'll go climb it." Basically anything you see in the game, you can interact with, explore, and discover. Again, much of this isn't required in order to progress in the game. However, it can be quite exciting to go off the track to a mountain, climb it and find a cave on the side, explore down it, to find a hidden treasure chest. What's in the chest might not even be overly significant, a bit of gold or a small item, it's more the excitement of the adventure that you get out of it. This is what makes the graphics stand out, the fact that everything is part of the world around you, and all melds together perfectly. The music isn't particularly interesting, and the background music is rather underwhelming, so much so that I usually just turn it off. Where the game stands out as far as sound goes, is the little details and touches. If there's a river off in the distance, it will slowly get louder as you approach (as opposed to having an imaginary line, behind which you can't hear it, and in front of which it sounds loud). Or, you might be walking along, when you hear a grunt off to the side. You'll stop and look around, to see an enemy up on a hill. It's little touches like this that really make good use of the sound.

As said at the beginning, it's easily going to take 70 hours or more to complete the game, even if you skip every single thing that's not necessary. If you spend time exploring and looking around, it can easily be much more than that (my most recent file was at around 120 hours, and even then I probably missed some stuff). It's a huge, massive adventure. Even once you beat it, though, there are still many reasons to go back. For one thing, you probably missed a number of things that you could've found, hidden caves, items, and such. As well, there are many people around who you can run into and talk to, to fully experience the story. In addition to that, you can try bringing different characters along with you, and experience what is literally a completely different story experience from what you had the first time. As well, whether with new characters or the same, you can try training in different skills and such. It's a much different experience going through the game with four fighters than it is with four spellcasters. Even if you have the same group with the same stats, though, it's still very fun to play through this game again, just to experience everything it has to offer.

Aidyn Chronicles certainly isn't going to be for everyone. For one, the sheer amount of time required is going to turn some people off right away. As well, the game starts off a bit slowly, and it takes at least a couple of hours to really get going on things (so if you're just starting playing and the beginning doesn't grab you right away, don't be put off). In addition, the game requires much more input from you. That is, you can't just walk along, kill everything in your path in quick little battles, let the game take care of the experience and skills for you, and just be a passive observer in what's going on around you. You really need to take an active part in your characters and the game, training in skills and working in battles. It's a very involved game. This isn't a bad thing, however, as for people who enjoy involved games, it's going to be a dream come true. Everything in the game is under your control, and it's how you choose to make use of it which is going to shape how you go through the game.

So, if you like RPGs, if you like long games, if you like involved games, then it's definitely worth your while to at least check out Aidyn Chronicles. While it might not be for you, it also might be one of the most wonderful games you've ever experienced.