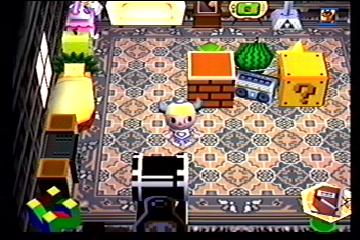 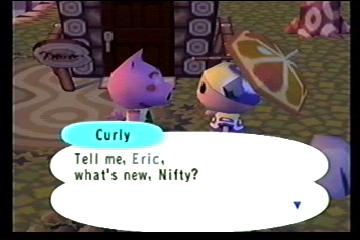 Animal Crossing is the game I've been waiting for forever it seems (and I didn't even have to go out and learn Japanese to play it, that makes things easier). A full world that I can completely immerse myself in.
It's not the type of game that's going to appeal to everyone however. There's going to be a good portion of people who look at this game, decide it's stupid and couldn't possibly interest them, and be completely right. It's really something you either love or think is boring and a waste of time. Needless to say, I'm on the love end of that.

Now that you know that, on with some ratings.

Gameplay: 10/10
To me, this is the single most important part of the entire review

Also, yes, this game does make use of the GBA and e-reader. However, don't feel you ''won't get the full experience'' if you don't have them. Sure, they're fun little things to play around with, but, the game is just as great even without them. Also, don't feel you're missing out on too much if you don't have anyone to play this game with. Sure, there are a few things that will be different, but, I'm playing this game alone, so, don't feel that just because you don't have someone else to play with that the game will be any less fun. This game also includes a bunch of NES games. If you're like me, you already have basically all of the NES games for the NES itself and still have your NES hooked up right next to all your other systems. However, if you don't have them, or your NES is broken or stored away somewhere, this is a nice little bonus. As well, most of the NES games are able to be played on the GBA, so, if you do have a GBA, even if you already had the games for NES, this is a nice little thing as well, now being able to take the games on the go with you.

Graphics: 6/10
The graphics are nothing special, but, so what? If you're looking for some flashy graphics, go watch a movie or look at a painting or whatever. If you're at all concerned with graphics, you're not going to like this game. However, I don't care at all about graphics, the characters could've been stick figures and I would've been happy.
The graphics display what they need to display, not much more and nothing less.

Sound: 7/10
Well, one thing to note about the sound is, it varies. The song that plays in the town changes every hour, you can create your own personal song to play when you talk to people or the clock rings, you can get new songs each week to put in your stereo in your house, etc.
Find or create some good songs early.

Lastability: 10/10 or 1/10
One thing I want to address right away is, I keep hearing people say ''This game is only meant to be played for short stretches of time, it's not meant to be played for hours on end.''
Well, whatever it is that's causing people to say that must be completely eluding me, because here I am, writing this review weeks after getting the game, and I'm still playing it for hours at a time, practically every waking minute it seems, it's taken over all of my free time, and it's not letting go.
Yes, you ''can'' play it in short stretches like that if it's how you want to play, the game allows one to play either way. However, it's certainly not limited to one style. That said, resist the urge to change the clock. Don't do it. If you do, then the 1/10 rating applies. If all you want to do is visit all of the events or something, play with the clock so by the end of the week you feel you've seen everything you cared to see, there's a good chance you're going to get bored.
However, if you play the game as it was meant to be played, minute by minute, hour by hour, day by day, through the entire year, then the 10/10 rating applies. Sure, if your only goal is to see all the events you'll be bored by the end of the year. There's so much more than that though. Aerobics, treasure hunts, raffles, so many things that never end. Sure, you may miss an event if you have something to do that day, but, hey, you have something big to look forward to next year. Talk to your neighbors, they always have stuff to say. Sure, some things are going to repeat, but how many actual people do you know that always have completely new things to say every day of the year? It's the experience of talking to your friends, being involved in their daily activities.

Overall rating: 10/10 or 0/10 (for me, 10/10)
A game is not always sum of its parts. The low rating in graphics, as I said, doesn't make any difference to me. The low rating in sound (often I have my sound so low I can't hear it, sound doesn't matter to me either), still doesn't affect my final rating. If these things do matter to you, then the final rating for you would be different as well. What matters is, if what this game is trying to accomplish interests you. As I said at the beginning, if you think that the premise to this game sounds boring, that the lack of an ending or whatever turns you off, this game will be a 0/10 to you, and you'll be completely right, everyone has their own tastes.
If you're like me, however, this game is a dream come true, what you've been waiting for, and there's no way you can not buy this game.

Rent/Buy: Buy
This game takes up an entire memory card (59 blocks that is), and while the purchased game comes with a free memory card, if you're renting it, chances are they're not going to include the memory card, so you're going to have to find a way to clear off all that space, and also you're going to miss out on the bonuses on the included card. I suppose you could just rent this first if that's your thing, I never rent games myself in the first place. However, for me at least, this game was a no-question, must-buy. If I didn't already own a Gamecube, I would've bought the system just for this game.