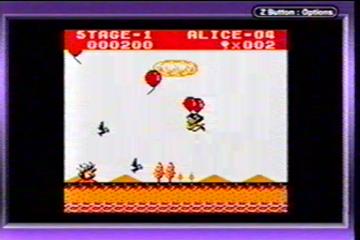 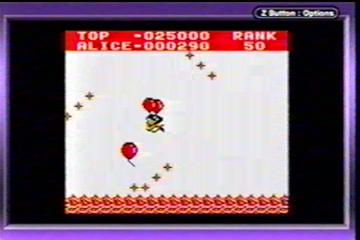 One day you’re just standing there peacefully, when all of a sudden your little brother starts to float away attached to a bunch of balloons. Hate it when that happens.
So, off you go with your own trusty balloons to rescue him.

Gameplay: 10/10
In the main mode of play, you head out to find your brother who has floated away. You have two balloons, which you must use to float between platforms, avoid enemies, and progress to the end of the level. If an enemy hits one of your balloons, it pops, leaving you with one, and while you have one balloon you can’t float back up as quickly. If the other balloon gets popped, you fall, and if there’s no ground below you, you die.
To blow up your balloons, you must land on solid ground and hit down four times for each balloon to blow it back up. You can land with one balloon and blow up your second, which is certainly the preferable option if you have the choice, as opposed to waiting for your second one to pop and you falling. You can let go of your balloons by pressing B, which you sometimes must do to pass underneath an obstacle you can’t fly under or over or walk past while holding your balloons.
Most enemies, if you hit them from above will just send you bouncing back up, although there are some enemies which will kill you on contact. At the end of some levels is a boss of sorts, which usually involves you letting go of your balloons and jumping at him or something along those lines.
As you fly along there will be balloons floating in the air, which when you touch them will give you points (and points lead to extra lives). If you touch 20 balloons in a row, all of the single balloons will become double balloons until you miss one. Throughout the stages you may also encounter bonus stages, which when you enter them, there will be balloons floating out of pipes, with you trying to catch as many as you can, and if you get all of them you also get a free life.

The other mode of play is a “balloon trip” mode. In this mode, there is no ground below you, so you won’t have any chance to land and blow up your balloons if you get hit. The screen also moves along by itself, and if you fall to the back it will push you forward. In this mode, you’re just trying to survive as long as you can without dying. As the screen moves along it will give you a small amount of points continually as time passes. There are also balloons which you can try to catch for more points as you avoid the many enemies flying about.

Graphics/Sound: 7/10
If you’re playing this game on a black and white Gameboy, the graphics look very good for a normal Gameboy game, everything is nice and clear and defined. If you’re playing on a Gameboy Color or Advance, the standard color pallet it assigns to the game, in my opinion, is just too orange overall. I much prefer the color mode one gets by holding left as the system starts up. Of course, that’s a matter of personal preference, and there are the usual variety of color pallets one can try out to find one that one feels suits the game. There’s some basic background images, nothing too intricate, but it adds some feeling of location to the stages. There are a number of different enemies, and some interesting bosses, as well.
The music in the game sounds very nice, and there’s a variety of different music that will play for each different level. The sound effects aren’t anything too complex, just little popping noises if your balloons pop or when you catch a balloon and such.

Length/Replay: 9/10
The main game itself is rather challenging, especially as there’s no saving option or anything and you have to beat it all the way through, which can be quite the task. The balloon trip mode doesn’t really have any end, it’s just trying to see how high of a score you can get (although the high score resets to normal when you turn the game off). As long as you don’t mind that the only goal is points it’s a very fun mode, although if that doesn’t really appeal to you, you might want to push the rating down to a 7 or so.

Overall: 10/10
A rather challenging game, although it can get frustrating at times.
The balloon trip mode is a nice little extra and could be a nice little game all by itself. It’s not a game that’s going to present you with any deep storyline, and the fact that there isn’t any save feature does sort of tie one down to it.
That aside though, it really is a great, which can provide a few minutes of entertainment when one just wants to float around and try for points, or a decent-length challenge in the main mode, and is very fun to play.