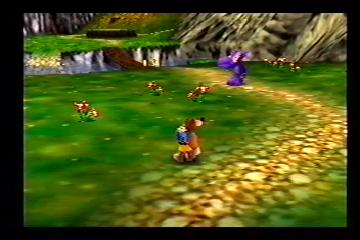 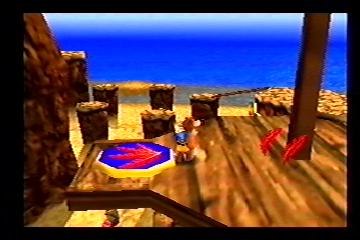 The N64 was a system bursting at the seams with some spectacular 3D Platformers. At the top of that list, of course, is Mario 64. Below that, however, there are quite a number of other very enjoyable options. Banjo-Kazooie manages to stand apart from the crowd, though, for a variety of reasons. In my opinion, it's the second-best Platformer on the N64, and that's quite a distinction. Even now, with newer games for newer systems, it's still one of the best ones out there.

Banjo-Kazooie is the story of a bear and his bird. Banjo is a bear, and he is joined by his friend Kazooie, who has taken up permanent residence in Banjo's backpack, which he carries with him wherever he goes. Banjo is resting peacefully in his bed, with Kazooie in her bag hanging from a coat rack, when outside there's a loud commotion. It seems that an evil (and rhyming) witch has become jealous of Banjo's sister's beauty, and desires to steal it and make it her own. So, down she swoops, takes off with his sister, and it's up to Banjo and Kazooie to rescue her before something bad happens.

The layout of the world in Banjo-Kazooie is similar to that of Mario 64, in that you start out in a central "hub" area, and make your way to various stages that you enter and explore. While the castle area in Mario 64 had some nooks and crannies to explore, though, the lair in Banjo-Kazooie is filled with plenty of secrets and mysteries to uncover on its own, even before you enter the stages. You can have plenty of fun just wandering about in the main area, just seeing what you can find. In order to enter a level, you need jigsaw pieces, "Jiggies," to complete puzzles. You'll come across a puzzle missing a few pieces, and you'll need to find enough pieces to complete it to open the level. The first level's puzzle only requires one piece, which you find outside. After that, though, you'll need to find the pieces inside of the levels. Each level contains ten pieces, which is one of your main "goals" in the levels, to find enough pieces to move on to the next level. While you don't need to find every piece in each level, it makes your progression much easier to get as many as you can along the way. As well, each level contains 100 musical notes. You will need these notes to pass by certain doors which will block your progress in the main area. Again, you'll likely have more notes than you need just in the course of going through the level and getting jiggies, but, it's fun to explore every inch of the level, tracking down all the notes.

The main gameplay difference that sets Banjo-Kazooie apart from other games is how Banjo and Kazooie work together. Kazooie doesn't just sit there in Banjo's backpack doing nothing, there are a number of instances where she'll come into play. Whether it's something as simple as her springing off a jump pad, or Banjo resting on top of her while she does the running for a bit, or soaring into the air, or shooting eggs, Kazooie comes into play quite often during the course of the game. These different abilities will be put to use, in a variety of different ways, during the course of your adventure.

Play control flows smoothly, and before long everything will seem second nature. Likewise, camera control works very well in this game. It seems simple enough, the left and right C buttons rotate the camera, and the R button focuses the camera behind you, and you can also zoom in and out. Yet, there are very few instances in the game where you'll have problems with the camera control, as the camera works smoothly throughout the course of the game. Even years later, many games don't have anywhere near as nice a camera control as this game does. The graphics in Banjo-Kazooie work very well with the level design. There are a number of very different levels, each with their own unique graphical style and setup. Little touches here and there hidden in the corners and holes of levels make you feel really drawn into the game. The music is nothing too spectacular, but, it works well enough. Each level has its own distinct music, and the main area has its music which sounds rather similar to the Teddy Bear's Picnic song. It fits the game well though. There are a number of little sound effects and noises and whatnot, by enemies and such, which add to the game as well.

The other thing that really makes Banjo-Kazooie stand out from the pack, is the level design. As mentioned earlier, even just the layout of the main hub area is very entertaining. It's not simply walking along a straight path from one level to another, one can have plenty of fun simply wandering around and exploring in the main area. Once one gets into the levels, however, the designs of the actual levels are excellent as well. Each level has ten Jiggies to collect, which are similar to the Stars in Mario 64, in that getting the Jiggies usually involves solving a specific task, defeating a particular enemy, reaching a certain point, or other such things. Just that, you don't have to exit the level each time you get one. Likewise, the 100 notes in each level are similar to the coins in Mario 64, but with a much more deliberate layout. The notes essentially are a way of making sure that you haven't missed any area in the level, as the spread out of the notes is very sensible. If you're still missing 15 or 20 notes when you think you're done, odds are there's a significant chunk of area which you've missed.

Even beyond the basic level design, Banjo-Kazooie is filled with numerous little intricacies which make it feel even more memorable. One example which always stands out to me is: In one of the early levels, there's an area where you need to defeat a certain enemy in a shell to win a Jiggy. Once killed, however, instead of simply disappearing completely and leaving a Jiggy behind, the shell itself is left behind. You then can jump up, and enter the shell. Here, you make your way around the inside of the shell, to the Jiggy in the center, and then make your way back out. The whole process of walking through it and back probably doesn't take more than a minute, but, it's just little touches like that which always makes the game stand out so much to me. The feeling of exploration, of wondering what's inside that shell, and being able to find out the answer. Things like that, while they might not sound like much on paper, really make the game special. As well, without going into specifics, again, the layout of the central hub area is just as entertaining as a whole as any of the levels, a fun experience to wander through and discover things.

This, in the end, is also what keeps one coming back to Banjo-Kazooie so often. Its base is an extremely solid platformer, with a very good control and feel to it, and a nice style all its own. Beyond that, though, is how well the levels come together, to make the game itself a remarkable experience. The central hub helps all the areas mesh together, and each of the levels feel both connected and distinct at the same time. While one certainly doesn't have to explore every nook and cranny in order to complete the game, there are quite a number of things to find, which will keep one coming back until you find everything. Even once you do, this is just such an enjoyable game, that, even with everything, it's fun to just go into a level and wander about, just exploring and having fun.