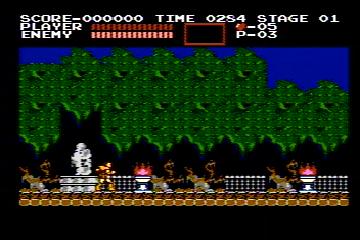 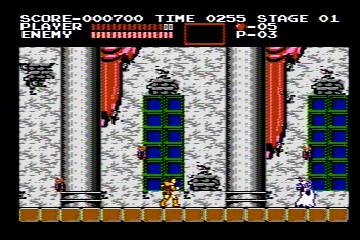 Well, you don't need to worry about what happens all the other times for now, all you need to know right now is that you're off to kill Dracula, and that's all that matters.

Castlevania 1, unlike some of the later Castlevania games, is best described as a side-scroller/platformer type of game. There isn't much of the exploring or collecting or backtracking or any of that stuff which has shown up in the later games. The goal of Castlevania is basically, just make it to the end of the level without dying. Sounds easy? Well, it isn't going to be.

Your main weapon is your whip. When you first start out, the whip isn't that powerful. You can find, however, whip powerups hidden in candles you can break along the way. These candles can also hold other stuff, such as items you can make use of. These can range from a dagger, an axe, or a stopwatch. Each item has its own particular strength and advantage. To use an item uses up hearts, which you can also find in the candles. That's about the extent of the item collecting though. Aside from that, it's just you and your whip against the enemies.

It's not nearly as easy at it sounds though. While the first couple of levels kind of ease you into things, the later levels get extremely challenging. While you can have as many continues as you want, you only get 3 lives (although you can earn more), and when you continue you start over at the beginning of the stage. So, it's better than starting over from the beginning of the game certainly, but, it's not exactly going to make things easy for you.

The game can get a tad frustrating at times, since the controls can be a bit stiff sometimes, and lead to a few annoying deaths. Stuff like, say you're on a moving platform, with an enemy coming at you which you're not at a proper angle to kill. Well, if you jump straight up, the platform will be out from under you by the time you come down. If you jump forward, you can't control your jump in air, and you move faster than the platform, so you'll be over it by the time you land. Little frustrating things like that. Not to mention, the always popular, being in midjump and having an enemy hit you and send you falling into a hole. Annoying little things like that. Still, that's not really that big of a complaint, and mainly just adds to the challenge. Which, the game is very challenging. Even though you have as many continues as you want, the game is still going to be rather tough to make your way through. That will just make it all the more rewarding when you actually beat it though.

When you die, you're set back to one of the various "restart points" in the level. That is, points that, once you pass them, if you die, you'll start again from there. When you get a game over, you'll start back from the beginning of the level. One small annoyance about this is, if you die before the first restart point, there really isn't much point to trying to continue from the beginning of the level with fewer lives, the best option being to just lose the rest of your lives, get a game over, and try again with all of your lives. While this is often the best method, dying on purpose can get a bit annoying at times. Another reason dying is annoying is, your whip goes back to its first level of power when you die. This is frustrating, since in the middle of levels, there usually aren't too many powerups that you'll come across. Not to mention, if you're right before a boss, trying to beat a boss with a low-power whip is rather difficult. Of course, there's nothing specifically wrong with dying being annoying. It's not like it's supposed to make things easier on you or something. Just, those are some things worth mentioning.

What really makes this game stand apart, are the level designs and the enemies. All of the levels are varied and interesting, and really gives a good mood to the. You'll explore a large variety of places, all with interesting backgrounds, scenery, and little touches here and there. As well, the music does an excellent job of complementing the mood of the game, fitting the levels and areas very nicely. As well, there's a very nice variety to the enemies you'll encounter as well. Things from skeletons and bats, to the Grim Reaper and Dracula. Both the individual enemies you run into on your way through the levels, and the bosses at the end of the levels, are very well designed and interesting, fitting the levels very well.

Another nice thing about the game, which used to be more common but isn't so much now, is the fact that it keeps a score. It's fun to make sure you find every hidden nook with a bag of gold, and kill all the enemies and whatnot. I wish more games kept store. I like that. While this isn't required for anything (aside from occasionally earning extra lives), it gives you something else to do while you're making your way through the levels, a reason for killing all those enemies you find along the way.

In general though, what you have in Castlevania, is a very challenging side-scrolling game, with some interesting little things mixed in here and there, and spectacular level design, graphics and music. Even once you've beat the game (which is no easy task, to say the least), the game will keep drawing you back, if only because it's just so much fun to play through the levels. Now, if only Dracula would stay dead, we'd be all set.