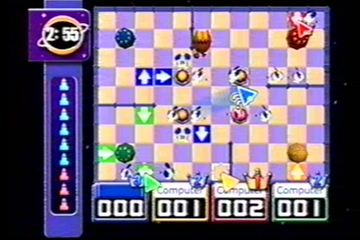 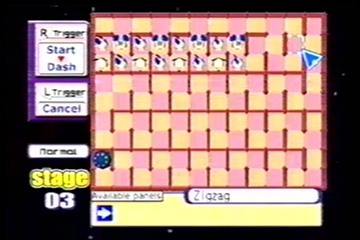 Welcome to Chu Chu Rocket, a world where you control a cursor that can place arrows in four directions, where your goal is to direct mice to rockets while avoiding cats and holes. Doesn’t sound like too much? Well, there’s more to it than that.

There are four main modes of play you’ll be able to choose from, all with the same basic controls and ideas to them. You place arrows - either facing up, down, left or right - in order to direct mice toward their goals. The mice change directions depending on the direction of the arrow when they hit it, and will also turn right when they hit a wall.

4p Battle mode would likely be what is considered the “main” game. In this mode, you and three other people, either controlled by other humans or the computer, compete to direct mice toward your particular rocket. Mice will emerge from certain locations on the map, while each of the four players have rockets set up in other areas. Each player can place arrows, only three at a time, and when the mice hit arrows they’ll change their direction. Place arrows to direct mice into your rocket, or arrows in front of another player’s rocket directing the mice away from them.

Also on the playing field are cats, who, when they come in contact with the mice, will eat them. As well, if a cat enters one of your rockets, that player will lose one third of all the mice they had collected. There are also special mice on the field who, when they enter a rocket, cause a random special effect to happen, such as making everything speed up, more mice, more cats, or other things along those lines.

At the end of the time allotted, the player with the most mice is the winner.

Similar to the 4p Battle is the Team Battle mode. Here, players are assigned to teams, and the mice totals are combined for any player on the team into one. Other than that, the mode plays the same as the 4p Battle.

Another mode is Stage Challenge. In this mode, either one or two players can set to work accomplishing set goals. At the beginning of each stage, it will give you a challenge and a time in which to complete it, such as collecting 50 mice in 30 seconds. There are 25 different challenges for you to complete, and a check mark is placed over a stage once you’ve completed its challenge.

The last mode of play is the puzzle mode. Here, you’re given a stage with some mice, cats, holes and rockets laid out on it, and only a few arrows you are allowed to place. Everything will remain still until you select to start it, and before then you’ll have to figure out where the place the arrows you’re given in order to direct the mice to the rockets without any problems. Once you’ve placed the arrows, you send everything on its way, things will happen, if you didn’t succeed you’ll be given another chance, and if you solved the puzzle the mice will enter the rocket and it will blast off. There are 100 prepared puzzles for you to complete.

Also included is a puzzle creation tool. You’re given the opportunity to create your own puzzles, placing mice, cats, rockets, walls, and everything else wherever you want, and then saving your puzzle. You can save 25 puzzles of your own, for others to try or to challenge yourself with later.

More about the game

If you have someone to play with, you’re going to get much more enjoyment out of this game. While you can play any of the modes with just one player, it’s much more interesting to have real people filling out the remaining slots rather than the computer. Not that the computer doesn’t provide a decent challenge, just, you don’t get the same feeling sending a cat into the computer’s rocket as you do the person sitting next to you. As well, you could create puzzles for others to try out and have others create puzzles for you. The puzzle creation tool really is very fun if you have other people to exchange with, but unless you can forget your own solutions really quick, it doesn’t have nearly the same effect playing your own puzzles.

The puzzles in the game are rather challenging, and are interesting to complete. 100 puzzles really isn’t all that many though, it would’ve been a significant improvement if they could’ve included many more puzzles. While the puzzle creation tool is a nice addition, it doesn’t really serve much purpose if you’re the only one who uses it. The same can be said with the challenges, they’re a great idea, but there aren’t nearly enough of them.

Neither graphics nor sound in this game are really anything special. All of the play takes places on a flat chessboard-like area. Lines for walls and black areas for holes are scattered around. The mice are likewise flat and plain. The best looking things would be the cats and the rockets, with the cats having a more 3D look to them, and the rockets with the same type of look as well as a nice little animation to them when they blast off with the mice. Music is a fairly steady and plain background tune, not too repetitive or anything, but it’s just sort of back there, not really anything you notice much. There are a number of sound effects, arrow placements and cats growling and such.

If you have other people to play this with, it really is an excellent game. If you have two or three friends around who enjoy playing games with you, this could easily be a 10 game. Between the exciting all-out battles, team battles, and the puzzle creation, there’s many things for a group of people to do.

If you’re playing this by yourself though, you’re probably going to find things are over rather quickly. Both the stage challenges and the puzzles, there’s a number of them there, but not too many of them, and once you finish those up all you’re left with is battles against the computer. While those are still fun as well, it’s not quite the same. More puzzles and more challenges would’ve gone a long way towards making this a more interesting single-player game.

The core concept, the directing of mice into rockets and away from obstacles, is an interesting and fun one, it just would’ve been nice to see a few more ways for you to go about it.