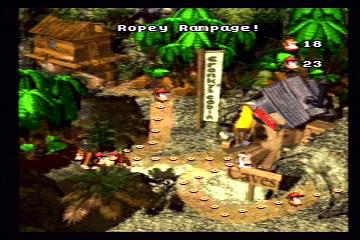 Donkey Kong Country was made for a number of purposes. It was to revive the Donkey Kong brand, which had been so popular 10 years or so before but hadn’t been used nearly enough since. It was also to push the graphical power of the SNES to areas it hadn’t gone, with detailed character models, lush environments, backgrounds, and many other intricacies. Not to be lost in all of this, though, is that Donkey Kong Country is a very captivating platformer, and very enjoyable to play.

The introduction is fairly basic enough. Donkey Kong’s banana horde has been stolen by a bunch of Kremlings, and so he and his pal Diddy Kong are off to find them. You start off only controlling Donkey Kong, but, within stages are DK barrels, which contain the other member of your party if you didn’t have both of them. Once you have both members, you control one with the other tagging along behind. You can switch which one you’re controlling by pressing A, and each one has their own specific areas of strengths and weaknesses, so, you can switch to whichever one you need at a given time. If you get hit, the one you were controlling runs away and you’re left with only the other one to control until you find another DK barrel. You can play either by yourself, with a second player controlling the other character, or alternating turns with a second player with whoever is playing controlling both of them.

As you move through the levels, you’ll be able to jump on enemies, move across platforms, and also use a rolling technique to attack certain enemies and do extra long jumps. You’ll come across barrels you can throw at things, tires you can use to bounce higher, and many other items. You’ll also occasionally come across one of four animals - a frog, rhino, swordfish and ostrich - that you can ride on and will grant you other abilities. Once you beat a stage, you return to a map screen and a path is made to the next stage. Stages progress in a straight line, there’s no real side-paths or anything. Likewise, there’s only one direct path through each stage, there’s no “wrong ways” or different ways to complete the stage or anything like that. What there is, though, is a number of hidden bonus areas in stages, which you find a number of different ways, such as breaking through a wall with a barrel. These bonus stages are just quick little things, where you can do stuff such as collecting bananas or an extra life or such. On the main game selection screen though, next to your file, is listed a percentage. In order to get the highest percentage, you’ll have to find all of the hidden bonus stages. While not required to beat the game, it is a challenging little quest.

The graphics of Donkey Kong Country are really something to behold though. All of the character models, both your own and all of the enemies, are very detailed with a 3D look to them. Stage foregrounds have many intricacies to them, with ground patterns, walls, ropes, vines, bushes and many other objects. The backgrounds of stages are just as detailed, really drawing you into the stage with their feel of depth. In mine cart stages, it isn’t just you on a track, but in the background you can see an entire mine which you are contained within. In ice stages, it isn’t just the ice that you’re walking on, but in the background you see spectacular arrays of glistening icicles and other such things. Also there are weather and lighting effects, such as snowstorms flying in front of you or a dark cave where you’ll have to search out areas of light. Everything about the game is very detailed. Also the sound is quite enchanting, with a number of different background musics depending on the stage you’re in, which draws you even further into the world around you.

Donkey Kong Country is a game of decent length, it’ll take you at least a few hours to beat your first time through, and still a couple of hours after then. If you want to try to find all the hidden secrets and bonus areas hidden throughout the game, you can easily spend upwards of 15 hours or so searching around through levels for stuff. Also the game is very challenging. You’re only given a few lives to work with, and while you can get extra lives, they’re not too readily available. There’s a few save points scattered about throughout the game, but, you’ll really have to work to make it there before losing all of your lives, it isn’t the type of game where you just keep playing and figure eventually you’ll progress, you do have to be good enough where you can make it past certain spans of levels without dying too much. That’s not to say it’s impossibly hard at any point, just, it does require a fairly decent amount of skill. Once you do beat the game, you’ll be able to go back through looking for any secrets you may have missed, and even once you’ve found all of them, it still is a very enjoyable game to sit down and play through when you have a few spare minutes or hours, either by yourself or with someone else.

The core of Donkey Kong Country isn’t essentially different than any other platformer, with you jumping along, over holes, killing or avoiding enemies, and in a basically straight path. Still though, it manages to pull it off very well, without seeming like just another cookie-cutter platformer. It’s fun to play either by yourself or with another player, and it’s enjoyable to just sit down and play any time, no matter how many times you’ve beaten it. If you haven’t enjoyed other platformers in the past, you’re not likely to enjoy this game either. If you have enjoyed platformers before, or even if you haven’t played many, it’s a very fun game. The graphics are spectacular and the sound engaging, but that can only carry a game so far. Once you’ve made your way past those, you’re still left with a very fun game, which is really a joy to play.