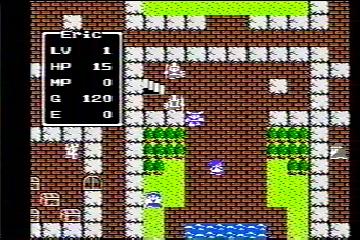 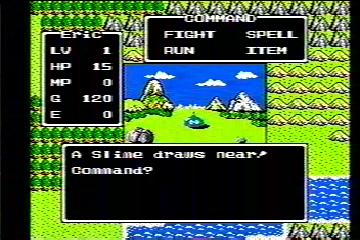 Things start out innocently enough. The princess has been kidnapped, and the king would like to have her back. Of course, things never end there, it’s never as simple as just saving the princess and then everyone sits down to relax and take it easy. It’s a starting point though, and it’s what your first motivation will be at the start of the game.

In the castle where you begin, there will be many people wandering around who you can talk to. All of these people just give you short little messages, usually not too detailed or explanative, but, through talking to everyone you can find, you’ll eventually begin to figure out where you should go and what you should do. There are also a few locked doors around the castle, and as you need keys to open them, you’ll find yourself heading back to further explore the castle at a later time. Upon exiting the castle, you’ll find yourself on the world map screen, with a little castle next to you, and a little town a few steps away. Walking onto the small map image, such as the castle, transports you inside of the large version that you can walk around.

In Dragon Warrior, you’re on a quest to save the princess and do everything else you need to do all by yourself, no party to help you out or anything, just you against the world. As you walk around outside, you’ll randomly encounter enemies, who will engage you in battle. When battle starts, a smaller screen will open up in the middle of the world map containing a battle background, which is the same regardless of where you are, the enemy, and your statistics. You and the enemy fight back and forth until one of you emerges victorious. If you’ve won, you’ll gain experience, to increase your level, and gold to purchase items, weapons, and armor. Heading over to the town next to where you start, you’ll find more people to talk to, with more information, and more areas locked by keys that you’ll be coming back to later. Also in this town you’ll find equipment shops, which will sell you weapons and armor you can use to upgrade your character, stronger swords to deal more damage and better armor to reduce the amount of damage you take. As you fight enemies and gain experience, you’ll also gain levels, which will give you a higher maximum hit points and magic points, and at certain levels also gain spells with a variety of effects, such as healing yourself or causing more damage to an enemy. As you make your way out into the world, the area around the castle will have relatively weak enemies for you to encounter, but as you move out further and further from the castle, the enemies will get steadily stronger. Usually there’s a visible mark of some sort where you can tell enemies are going to get stronger, such as a bridge or a mountain range, so it’s not usually as if you’ll just be wandering around fighting enemies you can handle easily when all of a sudden a random one pops up which is significantly stronger.

As you only have your one character to rely on in Dragon Warrior, this means that any time you need to progress and find you aren’t strong enough, basically your only option is to fight things, gain experience and buy better items. So, you will spend a great deal of time just wandering back and forth for a while fighting for the purpose of fighting. There really isn’t too much strategy involved in battle, you do have a few spells you’ll get which you’ll have to weigh the advantage of using an attack spell instead of attacking with your weapon but losing a bit of magic you could’ve healed yourself with later. Other than that, it’s not as if you can pick from spells, or rely on other characters, or anything like that. If you can’t beat an enemy, it just means you’ll need to work on making yourself stronger. As you head further out from the castle, you’ll find other towns, more people, and better items. You’ll have to keep an eye on managing your health, however, as the only place you can save your game is at the castle you started from. So, you’ll have to march your way out, explore some towns, gets items and fight, but still have enough strength left over to head all the way back to the castle to record your adventures. It can be a bit frustrating if you just want to take a short break from your adventures, to just have to leave the game on pause while you’re gone and have the risk of a power flick or something falling on the system and losing everything you’ve done. Still, the constant heading out, heading back, and trying to head out further than the last time you did while still realizing the risks involved is a very good feeling.

Graphics are pretty good in general. While you do only have one battle background regardless of the type of land you were standing on, there’s a large variety of enemies you’ll encounter, and all of the towns and people and land and everything else look basically like what they’re supposed to. Nothing is really too fancy, but there’s a decent variety to everything. With sound, you really don’t get too much variety, just one overworld music, town music, battle music, and other things like that. Still, the music is very good, all fitting the mood of everything well enough.

Dragon Warrior is a fairly challenging game, which will take you at least a few hours to beat even if you know what you’re doing and where you need to go. Once you do beat the game, unless you didn’t talk to everyone and want to go back and see what everyone had to say, you’ve basically seen everything there is to see in the game. Still, it’s a very fun game to play through if you have a day or two to spare and want a bit of a challenge. While you might not find the variety in characters and skills you find in later games, no matter how many times you go through it, Dragon Warrior still proves to be an enjoyable game to play.