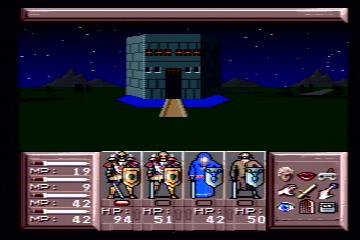 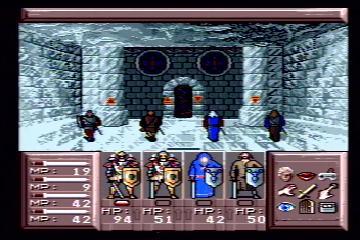 At the start of the game, you’ll have the opportunity to put together your group consisting of four classes: fighter, scout, magician and priest. You can choose their gender and name them, and then assign stats to them. For stats, the game “rolls a dice” for you to give you a group of numbers, and you have to pick what number to assign to which stats. If you really dislike your numbers you can have it roll again, but you can only do that so many times and then you’ll have to stick with the numbers it gives you. Alternately, you can have the game automatically pick names, genders and stats for you, but, what fun would that be. Once you have your group together, you’re placed down in the middle of the land, and the story is explained to you, a story of the struggle between humans, dragons, and the drakkhen, a race of half-human half-dragon. Humans destroyed dragons, dragons come back and are near destroying humans, and now you as humans have to head off to the world of the drakkhens to gather eight “tears” which will save your from being destroyed.

When you’re on the main map screen, you wander around in a group of four, your characters are invisible and you seeing the land from a first-person view. Randomly, you’ll encounter an enemy, and when this happens your four characters will come out onto the screen to do battle. Battle is done in real-time, and you only have direct control over one character at a time, with the others automatically performing actions. You can select action types for the characters to perform when you don’t have control over them - cast spells or attack or stay on the defensive or other things like that - and you can also switch which character you have control over any time you want with the quick press of a button. Once the enemy is dispatched, you’ll gain experience and gold and then go back to your first-person view. You’ll have a chance to collect weapons, armor and items, and also buy them at stores with your gold, which you can then equip them to your characters to improve their attack or defense or give them other abilities. You’ll need do a decent amount of menu navigating, arranging equipment and attack methods and other such things.

You have a map screen you can look at, and you’ll notice that the land is broken up into four sections, arranged top-to-bottom. When you first start off, you won’t be able to leave the section that you’re in. You’ll notice several other things scattered around the map, such as houses and inns and castles. At houses, there will be a person waiting at the door to talk to you and give you a message, at inns you’ll be able to gather information or buy things, and at castles is where most of your action will be taking place. One of these castles is directly in front of you, and that’s the first thing you’ll be making your way toward. When you enter a castle, all of your characters will now be on the screen, and you’ll be able to walk around inside of the castle. You still only can control one character at a time, but you can designate the character as either a leader, meaning if you move into another room the others will follow you into the room, or an individual, where if you move into another room everyone will stay where they were. You can still switch between characters at any time, so, if you wanted, you could break up and explore, or stay together as a group. Inside of the castles, you’ll come across a number of items which you can take, as well as an occasional stray monster you’ll have to fight, and people you can talk to. You’ll begin to learn more about what’s going on in the world around you, and be sent off to continue your quest. The world around you will open up for you to explore, and you’ll make your way from castle to castle and area to area slowly learning more and accomplishing tasks. You’ll do a good deal of walking, between castles and inns and other places you need to visit. You’ll encounter a number of battles on your travels, building up items and equipment that you can use or sell again at a later date. Your characters will increase in strength and health as you have more battles.

The actual world you walk around is really rather plain, mainly just consisting of solid colors such as green or white to indicate if you’re in an area that’s supposed to be grassy or snowy or whatever the case may be. There are a few bushes and trees and things scattered around which look decent, but, as far as the world map goes that’s about it. There’s a sun in the sky which slowly rises and sets as you walk around, and stars and the moon come out at night. Castles and houses are fairly detailed, and rotate to give you different views as you move around them. Enemies are varied and detailed and look rather nice. Inside of castles is where the graphics most stand out, as the castles are fully drawn with details such as moss on floors or broken walls, and many different rooms and places for you to explore. The music is very good, with a number of different ones to fit the feeling of where you are, very moody and draws you into the game extremely well.

The game is a decent length, taking up at least a few hours, and possibly more if you take your time to explore. Along the way you’ll learn more about the quest you’ve found yourself in, leading up to an ending that really ties everything together. After you’ve completed the game once, if you weren’t thorough in exploring you can give it another play through to further explore and find out things you may have missed. Even once you’ve been everywhere and talked to everyone, it’s still fun to start up a new game, maybe get some different stats for your characters and try out different tactics, and just wander around and enjoy the game.

Drakkhen is a very fun game, which would be easy enough for anyone to just pick up and play if they wanted to give it a try, and with many areas for customization, exploration and detail for those who want to put in more effort. Once you really get into it, it’s a rather challenging game. The stats assignment really adds an extra element to the game, since it’s not like you’re ever going to get a roll where you have a maximum of every stat, so you always have to decide what areas you want each character to be stronger or weaker in, and gives you a different look on things. It’s a very fun and enjoyable game, one that’s very easy to get yourself engrossed in.