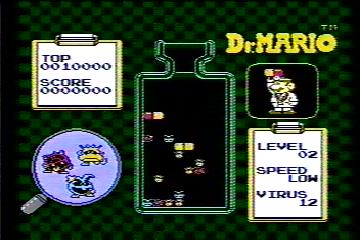 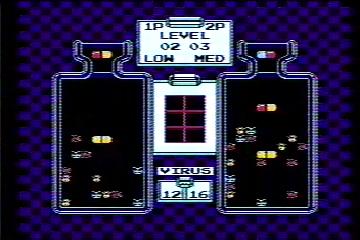 In between all of his plumbing and saving princesses and such, Mario seems to have found time to get his degree in medicine. He is quite the talented guy. He needs your help as his assistant though, in what may be his most serious task yet. Getting rid of horrible bottled viruses before they have a chance to escape and cause havoc. Armed with only his trusty array of pills and his cool doctor’s getup, he’ll be dispensing the medicine and leaving it up to you to find where they must go in order to restore health and order.

Gameplay: 10/10
There's just one mode of gameplay, although it has both a one and two-player mode. Your goal in both of them, is to get rid of multi-colored viruses inside of a bottle. There are three different colors of virus: blue, red, and yellow. To get rid of them, you must make use of your trusty pills. Mario will toss the pill from the top of the bottle, and you can see the upcoming pill in his hand. Each of the pills consists of two parts, which are a random color each, they can either be both the same color, or two different colors. You can rotate and move the pill as it falls, and, when it hits a virus or the bottom of the bottle, it stops.
To clear a virus, you must have 4 of the same colors in a row. That includes both the virus and the pill. So, for instance, if you have just a single red virus, you must put three red sections of pills on top of it. If, however, you have two yellow viruses either next to each other or in such a position in which you can slide pills between them, making one chain of viruses and pills, you would only need two yellow pill sections, and it would clear both of the viruses. When you clear the virus, the virus and pill sections used to clear it will disappear, but, any remaining pill sections hanging out over the edge will fall separately until they hit whatever is below them and stop. Using this, you could make a combination effect, where, say, you use a part yellow part red pill to clear a yellow virus, the red part falls down on top of a red virus, and clears that one. Each time you clear a virus you get points, and you get extra points for clearing multiple viruses in a chain reaction.
On the startup screen, you can choose to start at any level between 1 and 20 (there are levels after 20 if you beat 20, but, you can’t choose to start on one, you must progress up to it), and speeds of Low, Med or Hi. The level affects how many viruses start in the bottle, while the speed affects how quickly the pills fall from the top of the bottle. On level 0, there are 4 viruses in the bottle, and for every level you move up, 4 more viruses are added. That is, on level 20, there are now 84 viruses. After that, seeing as the bottle is only 16 by 8 and therefore can only possibly hold 128 viruses (not that you could even clear them at that point, but, that’s how many sections are in the bottle), it decides you’ve had enough increased suffering, and for levels after 20, the virus count remains at “only” 84. While this does mean that after level 20 it stops getting any more difficult as far as viruses go, it still lets you progress in level count, so, you can always see how many levels past 20 you can go. Your game ends when the stack of pills reaches the top of the bottle.
In two-player mode, each player can choose their own starting level and speed, and the first player to clear all of their viruses wins, or if the other player’s stack of pills reaches the top of the bottle they lose. The first person to 3 wins is declared the winner. Clearing multiple viruses at once will cause “junk” pieces to be sent over to your opponent’s field.

Graphics: 7/10
There are three different background patterns depending on the speed setting that you chose.
The little viruses you’re trying to clear wiggle back and forth quickly, and on the side of the screen, under a magnifying glass, are large versions of each of the three different colors of viruses. When you clear a virus in the bottle, the large version of the corresponding color gets unhappy, and when you clear all of a particular color from the bottle, their magnified version disappears as well. When you pause the game, the entire screen goes black with just the word “pause” in the middle, so, no getting to pause the game to take a look at the board. No interesting pause animation though, which would’ve been nice. Oh well. Overall, nothing too fancy, but a few fun things.

Sound 6/10
There are only two different sound settings to choose from, as well as a “none” option. So, there isn’t much variety in the music. If one of the settings happens to appeal to you though, it can easily move the rating up to a 10/10. Personally, I love the “fever” music. If neither of them appeal to you, you’re just sort of out of luck. There’s also different music for the title and setup screens, but, of course, you won‘t be on either of those screens for too long.
As far as sound effects, the pills make noises when they come in contact with something else, there’s a little noise when you clear a virus, a small noise when you pause, all of the normal basic sound effects one might expect.

Replay: 8/10
If you have someone else to play 2-player with, you could move the rating up to 9/10. A two-player mode with the computer controlling the other player would’ve been very nice. That’s pretty much the only thing that keeps it from being a 10/10. In 1-player, while the levels do stop getting more viruses after level 20, it’s still fun to see how far you can go. Just sitting down and playing for a few minutes is great fun, and one can easily lose a few hours at a time in the game. While sometimes you may reach a point where things just seem impossible and you don’t want to touch the game again, 5 minutes later it can suck you right back in.

Overall: 10/10
Of course, if puzzle games don’t appeal to you, you’re probably not going to like this game.

Assuming you do like puzzle games in general though, this is one of the better ones out there, and very fun to play, alone or with an opponent. Very addictive, and very fun.