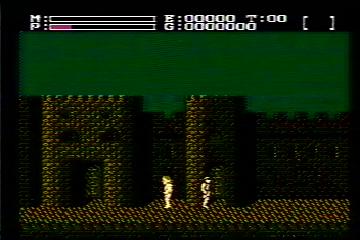 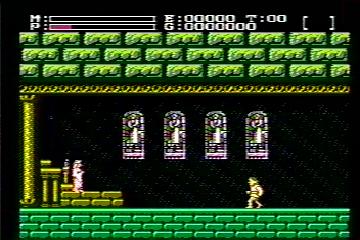 It happens all the time, doesn’t it? You go away for a bit, come back to your town, and it’s overrun with monsters. It’s up to you and your practically-naked self to save everyone from horrible destruction. Upon visiting the king, he tells you he’s depending on you to save the town, but, of course, despite his life being at stake, he can’t spare anything more than 1500 gold to help you. How nice of him.

Faxanadu is a sidescrolling type game, with a few RPG elements added in. You walk along, fight enemies you come across, who leave behind gold or health and give you experience. Once you reach certain experience levels, you can stop by a guru and he’ll advance you to the next level. You have a health and magic bar across the top of the screen, and you can use your gold to buy spells, weapons, armor and items at stores. Equip yourself with better weapons and armor to become stronger and have better attacks. At the start of the game, the first sword you get can only attack straight ahead, and since you’re so inflexible you can’t bend at the knees, anything that’s below the level of your chest will have to be dealt with using magic until you save up and buy a better sword that attacks with a downward slash.

In your town will be a number of houses you can go in and people you can talk to, who will enlighten you about the troubles that have befallen the town. Upon trying to leave the town, you’ll discover the exit door is locked with ''The key of Jack,'' so, you’ll have to stop by the item store and pick up a J key. As you advance along, there will be other doors locked with different keys that will impede your progress, as well as other obstacles that you’ll have to deal with using different items. Most of the challenges you face will just be fighting off enemies, but there will be a few areas where you’ll have to find a certain item, figure out what needs to be used, or where you need to go next. Progression involves going through a series of areas infested with enemies and town areas. As you reach new towns, there will be new stores with stronger items to buy, new people to talk to who will guide you along on your path, and other things to discover. In most towns will be a guru, who as well as advancing your level, will also give you a password. Saving is only done through passwords, and when you resume with a password you start at the guru who gave you that password, with the lowest level of experience of the level you’re on, as well as a set amount of gold depending on your level. Saving is certainly an awkward process, not only the experience and gold not being saved exactly, but the passwords are fairly long and some of the letters look too similar to one another. It’s quite a frustrating experience to try to resume with your password only to get a message saying that it’s incorrect. You’ll want to hang onto any password you write down so that, if that does happen, at least you won’t be set back too far.

The game itself actually plays very well. The action elements, infused with the gold, experience and weapon and armor upgrading all fits together nicely, yielding a game that is very fun to play. While you will sometimes find yourself just wandering around fighting enemies to gain gold to buy a new item or spell, it really doesn’t seem that annoying, as the game is very fun to play no matter what it is you’re doing. As you’re trying to progress, it can be annoying when you run into an enemy that’s stronger than you’re expected and kills you before you have a chance to recover, setting you back to where you last got a password. Still though, it never gets to the point where you feel you can’t get past a point, are lost and don’t know what to do, or just get tired of the game. It’s very enjoyable to play and progresses very well. Graphics aren’t really anything special, everything looks detailed enough where you can tell what it’s supposed to be, but nothing too much beyond that. Many of the areas look somewhat similar except for different colors of blocks. There are a few little effects like fog and such, but overall graphics are fairly average. Sound is also pretty average, it isn’t going to annoy you, but it isn’t really anything special.

Faxanadu isn’t going to appeal to everyone. It’s a mix between a mostly action game with a few RPG elements added in. There are towns where you can just walk around and talk to people, but most of what goes on happens outside, jumping over holes, climbing, and fighting enemies. You’ll have to do a bit of maze wandering as not all of the areas and castles are just a straightforward path. It really is a very good mix of all these things though, resulting in a game that is very fun to play. If you like the parts that make up the game, you're most likely going to like this combination of them as well. The password system is a bit of an annoyance, but still, it’s a very fun game to just sit down and play for a bit, advance to the next town, fight some enemies, or whatever. This is really a game you should at least give a try, while you might decide it doesn’t appeal to you, it also might be something you find that you really like.