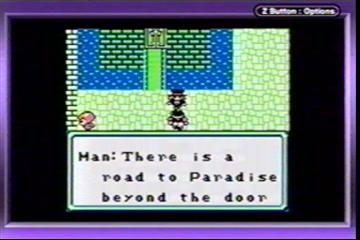 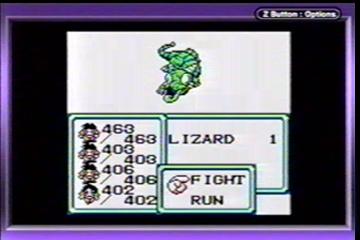 Final Fantasy Legend's quest is more one built out of curiosity than anything else. In the middle of the starting town is a big tower with a locked door at the base, so, naturally you want to find a way inside and find out what's at the top of the tower. So, at the start of the game you assemble a party of four, choosing from a number of different races with different characteristics to them and set out on your journey.

To take a brief side-track now to talk about the initial character creation and things related to it. At the beginning of the game you can choose from a number of different races, which will dramatically affect your way through the game. You could choose to start as a human (male or female) and have a fairly steady and consistent march through the game without worrying about too much else. One of the other options, though, is to choose one of the other character choices, one of the Monsters, such as an Wererat. That's not where it ends though. As you fight enemies in the game, randomly they'll drop a piece of meat. If you feed the meat to one of the Monster characters in your party, it will change into a new Monster. It's not a "random" change so to speak, there is a whole large chart diagram for the changes. If you're just doing it on your own though, as far as you're concerned it's a random change. So, that certainly adds a whole new element to the game.

Now that the character creation is out of the way and you have your party assembled, you're off on your journey. The initial task has you finding three hidden pieces of equipment: A sword, shield and armor. Finding this and completing a task with it (not trying to spoil any of the game, so, not going to go into too much detail on something that doesn't happen in the first minute or two of the game except where necessary. The rest of this paragraph could be considered a spoiler, although it's not that big a deal. Skip the rest of this paragraph if you want, although I would still recommend reading on), will give you access to the key to the door of the tower. Once inside, you'll make your way up the stairs and come to another door. Upon exiting the door, you find yourself in a whole new world, similar to yours, bustling with people and life, with the tower in the middle of their land as well. You won't be able to progress up further just yet, there are things you must complete here first. This is how the game progresses, with you moving up the tower, finding more "worlds" to explore. It really is an adventurous feeling, this mysterious tower in the middle of a world, which no one knows much about except for you. You enter into these people's world through the door, do what you need to, and leave to find another world.

As far as the actual gameplay itself, it's similar to most any other RPG you'll play. You fight enemies, get gold, buy equipment and items, advance in statistics, all of that. The main difference is if you choose to have Monsters as part of your party, since as you progress in the game you'll find new meats to try, which will yield different results. In general though, it's a fairly typical RPG, nothing too out of the ordinary there. If you don't like RPGs in general, you won't like this. If you're looking for something new, this isn't it. Still though, it's very good at what it does, it's a very fun game.

Graphics and sound are nothing much to speak of. This game is for the original Gameboy, and looks fine on that. If you're playing it on a Gameboy Color or Advance, you'll have the normal minor coloring that those systems add to any normal Gameboy game, but nothing much more than that. The game does look fine though, there's no complaints about any graphical problems as far as that goes. Likewise, the sound works for what it does, it's nothing special, but it works fine for the game.

The quest in the game is fairly lengthy, which will keep you interested right up until the end. The story is interesting, with new things to find out and explore as you progress on in the game. Once you've beaten the game, there's still many things to go back through. For instance, your first time through the game you might choose a party of four humans because that's the simplest thing with the least chance for difficulties arising. Once you've beaten the game though, you could go through again with a party consisting of Monsters, trying to find different meats, using them in different combinations, and seeing what happens. As well, it's just a fun game to play through, even if you're just doing it the same as you did the previous time.

As far as original Gameboy games go, this is easily my favorite game. If the only Gameboy system you own is the original one, as long as you like RPGs in general, this is definitely a must-own game. Even if you have newer Gameboy systems and access to all of the newer games, this one still holds up very well. Even among the large library of games available now, this is still one of my favorites, and, again, as long as you like RPGs, really should be one of the games in your collection. Even as far as games in general go, not even factoring in the portability factor, this is still right up there. A very fun game, and definitely one worth owning.