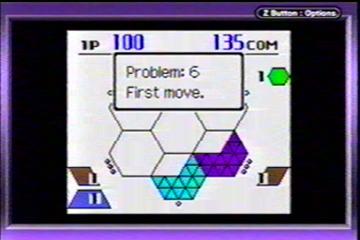 Remember in elementary school, those thin plastic things in different geometric shapes that you tried to fit onto a paper to make different patterns? Ok, maybe you never played with them, but, you can imagine. This game is sort of like that, except with points added. Sounds hexciting... err, exciting, doesn’t it? Well, it really is.

There are a few slightly different gameplay modes. The main mode has you pitted against a computer. You’re each given a random assortment of 7 different geometric shapes, a hexagon, and a large and small variety of a triangle, rhombus, parallelogram, and trapezoid. Occasionally at the start of the game, a player may be given the chance to add 2 pieces to any of the shapes. The game board is an arrangement of a hexagon in the middle, with more 6 hexagons attached at the edges of the center hexagon.
The person with the first move has to play their piece somewhere in the middle hexagon, and then the main gameplay starts. To play a piece, it has to be touching at least one edge on an already played piece. Any edge where it is touching has to be touching completely, that is, if you’re trying to play a triangle with edges two spaces long, and somewhere it’s touching an already played piece on a side but only one of the two edge pieces is flat against the piece with the other part of the edge hanging off over into empty space, you can’t play it there. You can rotate a piece around a number of different ways as well. Each main hexagon is broken up into an arrangement of 24 little triangles. Any piece you play has to be fully covering any triangle section it’s on as well, you can’t play a piece which is cutting through the middle of the triangles. Once you find a place to play your piece, you get 5 points for every edge of another played piece that it’s touching. That is, if you play a triangle and it’s touching one edge against an already-played piece, you get 5 points. If, however, you play it right in the middle of a bunch of shapes with a perfect empty triangle in the middle, so that all 3 edges are touching, you get 15 points.
The hexagons around the outside either have one dot or three dots next to them. What those mean is, the person who places the final piece to fully complete that hexagon gets either 10 or 30 bonus points (depending on whether it has one dot or three). The ten-point hexagons aren’t really too big of a deal, but, the 30-point ones are really ones you want to try to get for yourself, or, at least prevent your opponent from getting.
Once you’re out of pieces or have no more places you can play a piece, your turn is automatically skipped, and once both people are out of pieces or have no more places to play, the game stops. If you have pieces left, for each piece you have left, you lose 5 points for each side the piece has. That is, if you had a triangle left, you’d lose 15 points for that. If you have a hexagon left, you lose 30 points for that. Once all the points are subtracted, the one with the most points is the winner.
There are a couple of different ways to play the main mode. One where it’s just you against a normal computer, or a “level game” where the computer gets increasingly more difficult as you increase in level. There’s also a “practice” mode, where they give you a board with pieces already played on it, and given a just a few pieces to you and the computer, and your goal is to try to figure out how to get the most possible points out of the given arrangement. Once you do, you move on to the next puzzle.
The one thing really worth mentioning, however, is the two-player mode. While they do have a normal 2-player mode where each person has a system and a copy of the game and a link cable and playing that way, they have another way to play 2-player, involving just one system. In two-player mode, it’s just the normal game with the computer being replaced by the other player. In the one-system mode two-player mode, the first player takes their turn, hands the system to the other player, they take their turn, and hand the system back. It’s nothing overly complex, but, it’s a very welcome feature, as it easily allows 2-player gaming between two people who might not both have the system and game. It’s very addicting. There’s also a continue option where you can save your game and pick it back up next time you’re playing.

Graphics: 5/10
Well, it’s a bunch of geometric shapes being played on a board of hexagons. The background behind the board is simply a solid white area. Each of the pieces on the side of the board have a different color to them. There are 8 different color settings where you can have the main hexagons have different shades to them, but that’s about it for the variety.

Sound: 6/10
There are 10 different background music options you can pick from, as well as a “none” option. None of the music choices are overly flashy, most of them are fairly repetitive, but, it goes along with the game well, and they can be catchy. There are also various sound effects when you make menu selections or pick up and place pieces and such. Again though, nothing too spectacular.

Length/Replay: 10/10
Well, it is possible you could pick up this game, play it for 5 minutes, decide it’s stupid, and stop. In that case, obviously, it would be a 0/10. If you don’t have anyone else who wants to play 2-player with you, it would probably be somewhere around an 8/10. Assuming the game does appeal to you though, and especially if you have someone else to play with, the game is very addictive. The level and puzzle modes, with many levels to each, provide a variety of different challenges when you want a break from the main game. The two-player mode, again, is outstanding. Play with a friend, hold Hexcite tournaments with a group of people, whatever. Or, just spend hours playing the main one-player mode, seeing how high you can get your score.

Overall: 10/10
Again, if you don’t have anyone else to play with, maybe push the rating down a point or two. Even if you don’t though, it’s still an outstanding game. While the game may not appeal to everyone, if it does it’s one of the better puzzle games out there, providing hours of shape-placing fun.