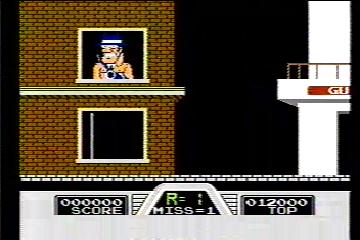 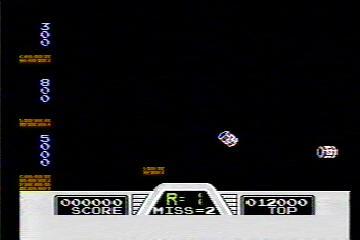 Generally when one thinks of Zapper games, the first thing that comes to mind is Duck Hunt. It is logical, as the game came directly on the cart with many copies of Super Mario Bros. and packaged in with many systems. Getting the Zapper and that game at the same time, it makes sense that's the one many people have spent the most time playing and with which they are the most familiar. While that's a very fun game too, and definitely nice as a way to get used to the Zapper, there are a number of other games out there which make use of it as well. One of these games, of course, being Hogan's Alley.

The game has three modes of play, labeled as A, B and C, with B feeling most like the "main" mode with the other two feeling more like side games. They're all very fun though, and make up a very entertaining collection. Mode B has you moving along a quiet side street. Of course, things don't stay quiet for too long, and, from the corners and past windows will pass various figures. Some of these are innocent enough, such as a kindly older gentleman or a woman carrying a baby. Others, however, are criminals intent on causing harm (one would hope. You don't really have the option of asking questions about what they're doing here), and, as the Zapper's the only tool at your disposal, it's how you'll be dispatching of them. The people aren't actual real humans, just frames moving along on a slide. Still, you'd do best to watch who you shoot, as shooting at innocent bystanders isn't the best of ideas. If you miss a bad person, or shoot a good person, you'll receive a mark against you, and too many of them will lead to you losing. After a few people pass through, you'll automatically move along to the next part of the street, where more people will come past. The game progresses along like this, with you trying to shoot all of the bad people while avoiding shooting the good people.

The other two modes, as noted, feel a bit more like side modes compared to the other mode, but, they're both still enjoyable. The first one has you, instead of out in the street, in a shooting gallery of sorts. Here, people will come in line in a spot in front of you, with you having to shoot the correct ones in a certain amount of time before they move away. As with the other mode, the goal is to keep this up as long as possible, by not shooting the wrong ones or waiting too long. Just, with them all showing up on the same line (as opposed to scattered around the screen), and with them coming to you as opposed to you moving along the street. The other mode, just if you were a bit tired of shooting at things that look like people, has you shooting at cans instead. Here, you're presented with a screen without anything across most of the bottom, some slots on the left hand side of the screen, and also a small section of land near the slots on the left. Cans will be tossed out from the right edge of the screen, and begin moving to the left and falling. Your job here is to shoot them, which will cause them to move back up a bit as they continue left, as if they're left on their own they'll just fall off the bottom of the screen. Your goal is to get them all the way across to the other side of the screen and into one of the slots on the left, or to get it to fall on the small section of land nearby. Each of the sections, as well as the piece of land, have different point values attached to them, so, of course, if one can do so, it's most beneficial to have it go into one of the higher point areas. Again though, the goal is just to last as long as possible, without letting too many cans fall off the bottom of the screen.

As with other Zapper games, the actual device used to play the game is of as much note as the game itself. If one doesn't have good aim, games like this might not be very much fun. Or, the other option is, one could hold the gun right up against the screen and not have to worry about that. How one chooses to do it and what rules one wants to assign to how one plays it, of course, is up to one's decision. No one is going to be checking up to make sure that one is playing "the correct" way or anything, so, if one has horrible aim, but is happy just holding the gun against the screen, that's an option. Or, one can sit back from the screen (or, as far as the cord will let one anyway), and work to practice and improve one's aim. On the other hand, if one isn't fond of the idea of using a gun and holding it and pointing it at the screen and whatnot in general, and would just prefer to make use of a controller and buttons for playing a game, this wouldn't be the sort of game one would find appealing just based on that. It's one of those things where, much of the draw of the game is just the different setup and style of play.

For Zapper games though, there are only a handful to choose from for those. So, if one is looking to get some more use out of the device, it might be worth picking up just based on the fact that it makes use of the Zapper alone. Also, compared to the other games, while certainly some of them are very fun, this one does stand out as one of the better ones. Not that there's anything wrong with shooting at ducks and laughing dogs and whatnot, but, it's a bit more interesting actually moving along and changes in the scenery and such. While the game isn't exactly going to amaze anyone with its appearance or sound or anything like that, and as noted before the people aren't real, just figures on a slide, everything in the game does look fairly nice. While there are other Zapper games out there which might hold one's attention a bit more depending on what one is looking for in the gameplay, either way, if one likes the idea of Zapper games in general, this is pretty fun just based on that. So, if the idea of the game sounds entertaining in general, and one has a Zapper and is looking for games which make use of it (or doesn't have one yet but is interested in getting one), this is definitely a game worth checking out. It might not be the most thrilling and intense shooting out there, but, it's definitely a very fun little game, with some interesting modes, and which will keep drawing one back for another walk down the alley.