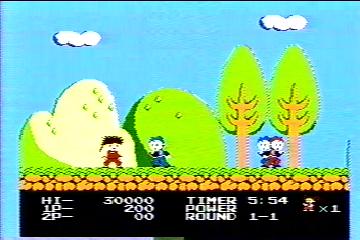 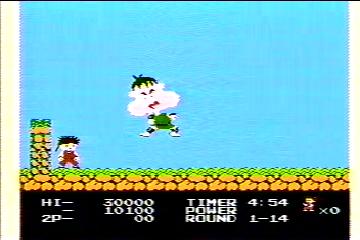 You’ve probably heard the rant before. Games used to be harder, new games just coddle you and guide you along by the hand, making it so you practically can’t lose. While that’s not completely true, there are some instances. Kid Niki is one of those. It’s the type of game that will make you want to take your controller, throw it against the ground, rip the game out of the system and toss it under your bed. Ten seconds after you do, however, you’ll be scrambling down to find it, put it back in, and resume playing. It’s frustrating, but in an addictive sort of way.

The game starts off with your silhouette behind the wall of the Ninja School. You see a bird fly up to you behind the wall, get shot by an arrow and land by you, and then you jump through the wall and head off. One assumes the bird probably had a message tied to it saying someone needed your help, it doesn’t really tell you that, but regardless, the point is that you’re on your way to adventure.

The game is broken up into a number of stages, which you moving along the stage from the left to the right. As you progress, enemies will come at you from either the left or right, some of which just run at you, toss things at you, or a few other methods of attacks. You must run up to them and hit them with your weapon to dispose of them. Each level will also have a number of other things for you to deal with, such as holes you have to jump over, moving platforms, and other obstacles along the way. At the end of each stage is a boss you must defeat, and once you do so you’ll move on to the next level. It’s pretty much your standard platformer formula, start on the left, move to the right, jump, dodge and kill things, and avoid dying. While there’s nothing wildly new or different there, it still is very fun.

Each level is broken up into a number of sections. Any time you get hit by an enemy or fall in a hole, you die and return to the beginning of the section of the level you’d made it to. You start off with three lives, although you can earn more with points from defeating enemies, and when you lose all of your lives, the game is over. You have unlimited continues, which allow you to start over from the beginning of the level you made it to. While that might make things sound easy, it’s all still very challenging. It’s very easy to die, as enemies will literally come flying at you from all over, jumping and moving their way directly into your path. Jumping over holes is made much more difficult if something comes flying out of the ground and heads straight for you, or if you’re on a moving platform which is about to sink into the ocean but there’s enemies coming at you from any other area of land. Even though you can continue as many times as you want, going back to the start of the level certainly doesn’t make things much easier. While one might assume, since you can continue as often as you want, that even if the game is hard, if you keep working at it that you’re eventually going to beat it even if you’re not good at it, that’s certainly far from the truth. Even with the unlimited continues, each of the levels can border on impossible by itself, and the unlimited continues won’t help you any if you hit your system and cause it to reset.

Despite the level of challenge, even if you’re not the near perfectionist it takes to complete the game, it still is very fun. All of the stages are very interesting, there’s a decent variety of enemies, and the music is catchy. Even though you might die every twenty seconds, you’ll still be able to enjoy yourself wandering through the stage, jumping around, and killing the enemies. Even if you are one who gets frustrated, the game us still addictive enough to keep pulling you back for more. Even if you never beat it, it’s still an enjoyable game. If you do beat it, you’ll take a hammer and smash it and never want to touch it again.. no, seriously though, it is entirely possible to beat the game, and even once you do it’s still just as much fun to go through playing the levels.

If you let Kid Niki get to you, you might get very frustrated with it. There’s certainly more than a few areas that are liable to do that to you. Really though, it’s just a video game, and what’s the use of getting mad at a video game? If you’re just able to play and enjoy it, it really is a very fun game. If you’re looking for something to test yourself against, a very challenging game, this is good for that as well. It’s not as if it’s so impossible that you’ll give up all hope of ever beating it, but it is extremely hard. With practice though, you can become better at it, and if you do keep working, you probably will manage to beat it.

There are a few small things hidden throughout the game, just one or two hidden areas and shortcuts for you to find. In general though, once you do beat the game, you’ve really seen all there is to see. So, another time through the game won’t yield any specific new discoveries other than those few things. There are still plenty of reasons to play through the game though. You can see how far you can make it without dying, try to beat the game without using a continue, see how high of a score you can get, or any number of other goals you might make for yourself. Even once you do beat it, it’s not as if beating it again will be any easier. So, just beating it again once you’ve beat it will be more than challenge enough. Regardless though, whether you never beat it, only beat it once or twice, or can beat it any time you play, it still is a very enjoyable game. It provides a very good challenge, and is just fun to sit down and play whenever you want.