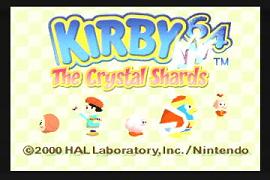 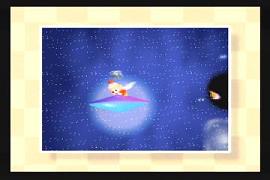 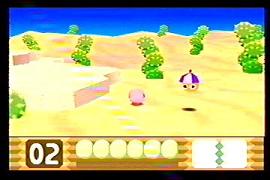 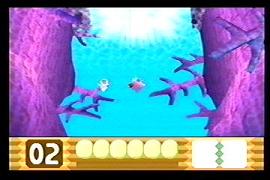 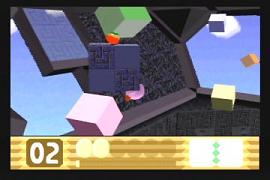 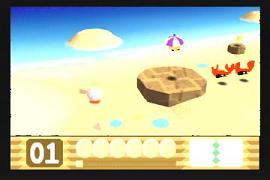 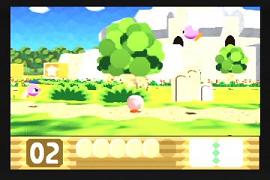 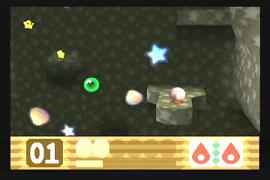 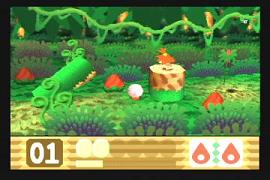 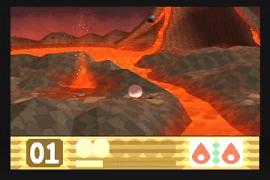 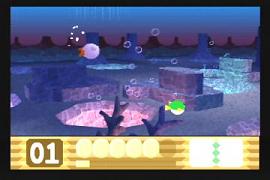 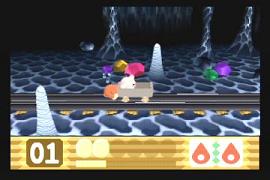 With the release of the N64, many series which had been popular on previous systems were in for a change. Specifically, games which had previously done so well in 2D often had to find out how well the transition was made to 3D. Many made the transition very well, showing that they could be just as fun with an extra dimension. Some had more difficulty with the transition, and didn't end up being nearly as fun as their predecessors. Others didn't show up at all on the new system, fading away as memories. Another option, however, was what Kirby 64: The Crystal Shards chose to do. Just because this new system offered the possibility of 3D, and that's what many of the games chose to do, didn't mean that a game had to do it. Kirby had worked so well with its 2D gameplay, and there didn't appear to be any need to change it. So, the game didn't. It just stuck with what made the game fun in the past, the core gameplay, and used the system to spice things up a bit.

Kirby 64, similar to a couple of others games, was presented in what was called a "2.5D" style. What this meant is that, although the scenery and surroundings and everything had a 3D look to them, the actual play of the game took place on purely a 2D path. Movement was up, down, left and right, without worrying about the "ins and outs" of 3D gameplay. The background would curve and rotate a bit as you walked along your path, but, it was all still the same straightforward "walk forward" sort of progression to what one was actually doing. As might make sense given this style of play, this game made no use of the N64's analog stick. Instead, with one's hands on the far left and far right of the controller, one used the D-pad for controlling Kirby through the words. Again, it had been a control mechanism which had worked great for so many games in the series before, and it still could do the same thing it always had.

This all isn't to say that this game didn't make any use of the new system's potential. While it didn't use 3D for the gameplay, many of the surroundings had a very nice 3D look to them. As mentioned, while walking along the path, it would often curve around, leading one on a turning path through the scenery. As well, even though it was all just background and stuff one couldn't interact with, there was a great amount of detail put into those areas making up the stage. 2D can still be quite beautiful, and Kirby 64 showed that off very well. Throughout the game, one progresses along a number of different themed levels: From snow, to fire, to desert, to water, and many other things. Each of these areas is crafted with wonderful attention to detail, combining to make for a very nice feeling as one makes their way through the level. As well, the music of the stage, often in a typical happy bouncy Kirby feel in general, always seems to go well with the surroundings, and makes going through the levels very pleasing.

The actual play of the game itself, has you making your way through a series of worlds (with, as mentioned, their own particular themes to them), each broken up into a series of stages. Along the way, of course, will be a number of enemies looking to get in your way, as well as a couple of more major enemies who will require more work to defeat. Kirby, as had been the case in the past, is equipped with one primary weapon to begin the game: His mouth. Enemies can be sucked up, swallowed, and disappear from your path. As well, certain enemies when sucked up will grant Kirby a special power, such as the ability to turn him into a fireball or have electricity surging through him. A special feature of this game, however, is that one wasn't only limited to a single power. When Kirby was armed with one power already, when he came across an enemy with another power, he could spit out his current power and throw it at the enemy, which would result in a combination of the two powers which he could then swallow and use. For example, while a fire enemy would allow Kirby to turn himself into fire, and a cutting enemy would allow him to throw small blades, a combination of a fire and cutting enemy would arm Kirby with a giant fiery sword which he could hold and slash away at enemies. There are a number of different combinations in the game, some more useful than others, or particularly useful in certain situations. Simply trying out all these different combinations and playing around with them on their own is quite enjoyable.

Throughout the levels, there are also a number of "crystal shards" which Kirby might come across. These, although not required in order to complete the game, give a higher "completion percentage" on the title screen, and, if one is the sort of person who likes to find everything in a game, will give one a fun reason to go back and play the stages again, exploring and looking for everything. Many of the shards are hidden away a bit off where one would normally be walking, or, more often, require a special ability combination to break whatever is blocking them from being accessible. While one might just pass by many of these in the course of playing the game the first time, after one has completed it, if one is looking for something more to do, and another reason to play through the levels, it's fun to have some more stuff left for which one can search.

The game isn't particularly difficult, and, especially with a good power combination, one can often breeze through it fairly easily. One isn't, as noted, required to find all the hidden shards along the way in order to progress, and, if one isn't the sort who cares about finding stuff just for the sake of finding them, it of course won't make any difference in the length of the game. Still, although it's not the most challenging or lengthy game out there, it's not overly short, and it's a very fun game while it lasts. Even if one doesn't have the urge to go back through it after one has completed it, the initial journey through all the levels is still very fun on its own. For one who likes to go back through and be complete about things, however, finding all of those shards can make for quite the challenge, as some of them are hidden away pretty good. As well, simply trying out different combinations, seeing which ones are enjoyable, and playing through the levels with them can be very fun. Or, one can simply go through the levels again for the sake of doing so, even if one has already beaten them. It still has the same fun that the Kirby series in general has, and for anyone who's been a fan of the other games, it's definitely worth checking out. It's a game that's just very enjoyable to play, and although it may not particularly blow one away in any particular aspect of it, is a very fun game, and for anyone fond of the style of game in general, and is looking for a bit of 2D action on a mainly 3D system, it's definitely worth checking into.