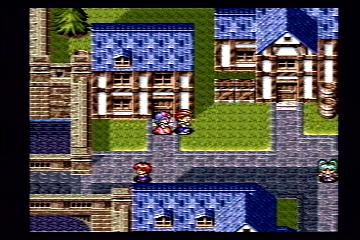 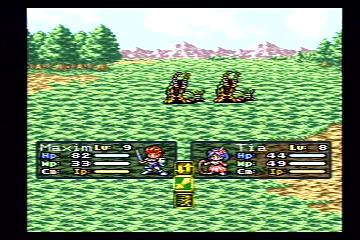 It's funny, if you're played Lufia 1, you've already beaten Lufia 2. Well, not exactly, but, something like that. If you've ever played Lufia 1, it takes place after the events of Lufia 2, and opens up by having you play part of the end of Lufia 2 before starting out on 1. Of course, when Lufia 1 was released, Lufia 2 didn't exist, that didn't come until years later.

Of course, the first question that probably follows from that is, well, both of the games are out now, you can play either of them. Which one should you play first? Well, not all of Lufia 2's ending is given away in the beginning of Lufia 1, there's still plenty of stuff to find out there. Still, the simple answer is, if you want to play the storyline in order, play 2 before 1. Still, and while this may be biased since this is the order I played them in, I feel that, from a gameplay perspective, it's better to play 1 before 2. Still, it's not like there's a "wrong" way to do it, either way is fine. The next question is, do you need to play the other games in the Lufia series to enjoy this game? Well, since this game comes first storyline-wise, you don't really need to worry about playing the others if you don't want. Still, it's highly recommended to play 1 as well, to finish up that storyline. The Legend Returns for GBC, and The Ruins of Lore for GBA, are both alright games, and worth playing if you get a chance. Still, they're not particularly necessary.

All of that out of the way, however, that doesn't tell you anything about this game. Once getting past all those questions, and particularly if you're new to the Lufia series and know nothing about it, the question is, what is this game like? Is it enjoyable, will you like it? I feel it's fairly safe to say, if you like RPGs in general, that you will fall in love with Lufia 2. Lufia 2 is fairly similar to most any other RPG in most of its makeup. By defeating enemies, you earn experience and gold. You learn spells, buy equipment, use items, and all of that other stuff. All of the basic RPG elements are there. There are, however, a couple core elements which make Lufia 2 stand out.

First of all, while encounter on the map screen are random, inside of dungeons all enemies are visible on screen. An enemy moves one square for each square you step, and it's possible to freeze enemies by firing an arrow at them. What this means is, for the most part, you don't have to get into any battles if you don't want. While it's obviously to your advantage to fight enemies to advance in statistics, the decision is left up to you when and what enemies you want to fight. The other main thing to note is, the dungeons are heavily focused on puzzle solving. While you do have to fight enemies along the way, it's not like you just fight wave after wave of them on your way to the end. There are many different puzzles you need to solve in order to advance through the game, from as simple as pushing a couple of pillars into the water to be able to cross, to puzzles with different colored blocks you need to push together to make disappear, and many other things. These puzzles, however, don't seem out of place, as if they're just stuck in your way to make things harder for you. The puzzles blend together very well with the overall dungeon design, making for a very enjoyable process on your way through. They're not overly difficult for the most part, but, they will make you think along the way.

Along the way, in addition to the people you'll add to your group, you'll find various monsters that you can add to your party. Not in a catching style or anything, just various things you'll encounter along the way. You can only have one in your active party at a given time. They advance in statistics not only by fighting, but also you can "feed" them items to increase their abilities. This doesn't have to be a major part of the game if you don't want, so, don't worry about it if it doesn't appeal to you, you can still make it through the game just fine with your group of people. Still, it's a nice little addition.

At the start I had mentioned about Lufia 2's story. This is another strong point of the game. Regardless of which order one plays them in, Lufia 2 has a spectacular story. Full of interesting conversations, meaningful characters, and twists and turns along the way. Even if you already played Lufia 1, you're still in for plenty of interesting happenings. Either way, the story really is remarkable, and, even aside from the fun gameplay, the game is worth playing through if only to find out about the storyline. Even once you beat the game and already know what's going to happen, it's still fun to play through numerous times, because the story is fun to experience again, and because the gameplay is still just as good.

Once you beat the game, another nice thing about Lufia 2 is, similar to Lufia 1, it features a "Retry" mode. In this mode, you get more experience and gold from fights, which obviously leads to fewer fights and a quicker progress through the game. Fun if you just want to play through the game again experiencing the storyline, if you want to show the game to someone else who isn't as fond of spending much time leveling, or even if you're just not fond of it yourself. Not that you really need to do much of it even on normal mode, basically just fighting what you come across is enough to get you through. Still, it's a nice option to have. So, whether on Retry or Normal mode, the game is fun to play through many times. Also worth noting if only because it's a nice addition, Lufia 2 features a very nice help system. That is, on any item or spell or anything, you can press a button to get a description of the item: what it does, how it's used, a general description of the item or spell. While most things are fairly self-explanatory, it is a handy thing to have.

With those things in mind, other than that, the game is, at its core, an RPG like most other RPGs. If you don't like RPGs, you're not going to like this game, there really isn't getting around that. On the bright side, if your main problem with them is not liking random battles, that's a very small part of this game, so, it shouldn't be as much of a bother. Nonetheless, if you like RPGs in general, Lufia 1 is easily one of the best ones out there. The core elements that you've enjoyed before are there. The puzzles work together with the dungeon design to make for a very enjoyable process. The battle system is fun and engaging. The graphics are great and the sound very nice. The story is spectacular, regardless of what order you play the games in, or even if this is the only one you play. The Retry mode adds something extra to your process of going through the game again. All of these elements blend together perfectly, to make for an absolutely wonderful experience. Highly recommended to anyone, one of the best games out there, just as much fun as it's always been.