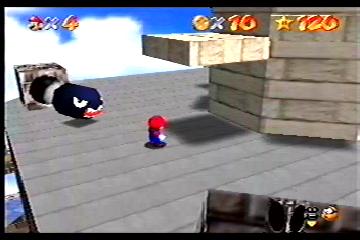 Mario was always slightly on the large size, as opposed to his more tall and svelte brother, but now, instead of just being large in two dimensions, he’s large in three dimensions. To celebrate his “filling out,” the princess has invited him to the castle for a cake. Of course, though, things are never that easy.

Gameplay: 10/10
Mario is assigned the task of reclaiming a bunch of stars. 120 in total. To do so, he’ll need to race turtles up mountains, reunite lost penguins with their mothers, build snowmen, collect coins, squish enemies, and many other things.
The game is centered around the princess’s castle. Inside of the castle are many paintings, which contain worlds inside of them. Mario must enter the painting, accomplish certain goals to get stars, open up new areas, and explore the depths of the castle. There are 15 stages in total, each with 5 unique tasks, and a red coin and yellow coin collection task. As well, there are 15 “secret” stars hidden throughout the castle separate from the main worlds. One doesn’t need to collect all 120 stars in order to beat the game, although there are a few small incentives to do so. If you don’t want to be thorough though, you don’t have to.
During the course of the game, Mario will also find a few different hats, which will grant him special abilities, such as being able to fly for short periods of time.

Control: 9/10
Mario is quite the acrobat in this game, being able to walk, run, jump, punch, do backflips, longjumps, slides, and a whole variety of different movies. Jumping out of water can be a bit touchy at times, but, aside from that, everything is great. Controlling Mario is very intuitive, and it’s fun at times to just randomly run around playing with Mario and trying out his different moves.
The camera system is fairly good, although it does run into a few problems at times. The C-left and C-right buttons cause the camera to move left and right, although from time to time the camera will get stuck against a wall so you can’t move it to the angle that you want it. The C-down button causes the camera to zoom out (and C-up while zoomed out causes it to zoom back in), to give a wider shot of the world. C-up while in normal view has it go into a first-person view, and you can look around anywhere you want with the analog stick, although you do have to be standing still to do this. Overall, not a perfect camera system, but it won’t give you very many problems, and most of the time you won’t even think about it.

Story: 3/10
The princess has invited Mario to the castle for a cake. Upon arriving there, Mario discovers the castle is empty, and hears a loud voice telling him to leave. Of course, the princess has been captures by Bowser again.
Exploring the castle, Mario will run into a Toad, who will explain to him that Bowser has trapped everyone inside of the walls, and has stolen the power stars. Bowser is creating worlds inside of the paintings, and giving the stars to creatures inside of them to safeguard. Mario must collect the stars to open up doors and break Bowser’s power. Most of the stars have a basic explanation story behind them, such as a koopa wanting someone to race, and he’ll give you his star if you win.
Basically, it’s not like you’re randomly wandering around aimlessly trying to get stars for no apparent reason and eventually you find Bowser, but, if you’re expecting a deep story or any surprises, this is the wrong game.

Graphics: 10/10
This game was the transition of the series from a two-dimensional platformer into a three-dimensional game. Aside from the significance of the transition though, the game itself is still beautiful. Huge castles with boiling lava, deep oceans with fish swimming around, wide skies full of clouds, dry deserts. So many varied and different locations to explore, and all depicted beautifully.

Sound: 9/10
Each of the different worlds and areas have their own music associated with them. From the calm, soothing relexation of water music, to the hurried, anxious music of a lava stage, all of the musics fit their levels well.
There are numerous sound effects as well. Bombs exploding, water splashing, feet padding against the ground. While you might hear Mario say “Woo... woohoo” once too often for your liking, Mario is finally given a voice, and it fits him perfectly.

Replay: 8/10
While there are 120 total stars to collect in the game, in the end you only need 70 to beat it. There are a few incentives to get the other 50, but, nothing that’s really going to force you to do so. It’s basically up to you and how much urge you have to be complete. It does keep a record of the most coins you’ve collected in each level, and on the title screen a comparison between the four save files and which one has the highest for each level. So, you can always try to top your own personal score of coins in a level, or compete with someone else to see who can get the most coins.
Once you’ve beat the game, there’s no specific incentive to go through it again, but, regardless, it’s a very fun game to play, and is fun to play through many times, or, again, to just start up and run and swim around just for the fun of doing that. Or, of course, you could just spend time playing with Mario’s face on the title screen.

Overall: 10/10
Different from the preceding games in the series in look and style, Mario 64 still retains all of the basic elements that made the others fun. It would be nice if they would stop ignoring Luigi and have included him somewhere, but, oh well.
Overall, this is a wonderful game, a great addition to the series, and, in my opinion, the best three-dimensional game ever.