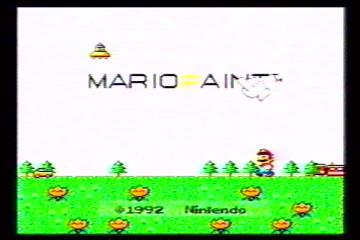 Mario Paint. At first glance, it might not look like much more than what one could do on one's computer with any included or readily available painting program. Of course, it doesn't have too much competition in this aspect as far as SNES games go, but, it might not at first seem like the sort of thing that one would have the urge to be doing on the SNES to begin with. It's a video game system, after all. Why would one want to spend one's time doing with it that one could just as easily be doing on a computer? The answer is, like most things which involve Mario, things are never as plain and boring and straightforward as they seem, and that there's more here than just simply dragging a pointer around and making lines.

One notable thing about the game, before even beginning to play, is the control setup. The game not only makes use of, but in fact requires, the SNES Mouse. This device, similar in style to a computer's mouse, features a ball on the bottom, which when moving the mouse across a hard surface (the pad it was made for, or just any old surface like a book or table or something) will cause the ball to roll underneath the mouse, causing a pointer arrow on the screen to move around. On the top of the mouse are two buttons, a left and a right button, which one can click to activate things on screen. This setup is probably fairly familiar to anyone reading this (it being on the computer, where, even if not everyone uses a mouse, have probably come across one at some point or another). As mentioned, the game requires this mouse, and will not work at all with the normal controller. So, if one doesn't have the mouse, one is limited to watching Mario run around on the title screen. On the bright side, while Mario Paint is kind of the most noteworthy game to make use of the mouse, there are actually quite a number of other SNES games out there which make use of it. There's an assortment of some 30+ US-released games which make use of it in some aspect or another. So, it's not as if one is just acquiring the mouse for this one particular game, as it's a nifty thing to have in general. Still, again, for this game it's the only option, but, really, it does give the game a very natural feel to it.

The title screen itself gives one a very good introduction to the game, as it rather embodies in itself why the game is so appealing. On the screen is written the words "MARIO PAINT," with Mario running around underneath. As opposed to just pressing a button to advance on to the game, however, there are a number of things which one can do on the title screen. Pressing each of the different letters causes various things to take place, such as the background changing, Mario shrinking, the letter dropping and possibly hitting him on the head, and all sorts of other things. Just being able to sit there and play around with the different letters and the effects they have is very fun just on its own, without even really needing to "start" the game. 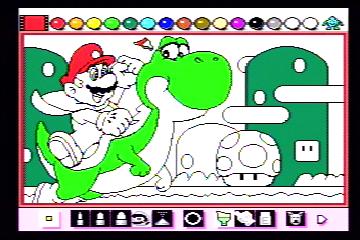 The main mode, as it were, is fairly similar to your standard painting program. You have a big white area in the middle of the screen on which to draw, with various "tools" around the outside with which to fill in the space. You can draw lines, create boxes, fill in areas, and other usual things like that. Unless one is particularly good at this sort of thing, this might not be too exciting for the inartistic. Beyond that, however, there are other coloring aspects which give one a bit more of something to work with, and can be plenty of fun. In particular, there are a number of pre-set images, which are just black and white line drawings of various things (such as Mario riding Yoshi). One can then use the tools (and in particular the paint filler. No having to worry about coloring outside the lines) to color in the objects as one desires. One can choose to either make it look like it should, like one thinks it should, or whatever strikes one's fancy. There's also an animation tool, where one can combine a number of images into a series, making for some interesting things. As well, there's a stamp creation tool, where one is given a square grid with a number of small individual boxes that one can fill in to create an image that way. 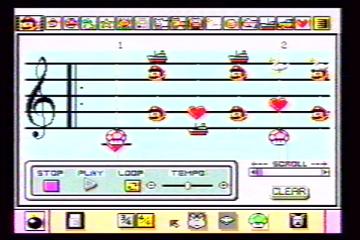 On top of the various art-related things to experience, there's also a music aspect to this game. Here, one is given a sheet to write music on, but, as opposed to notes, one is given various Mario-related objects, which make some rather unique sounds. One can play around with these, discovering what sounds the objects make, and forming them either into an interesting melody, a huge mish-mash of sound, or just something interesting and comical. If one isn't too good at creating one's own melodies from scratch, however, the game also features a couple of pre-set tunes, which one can listen to, and also adjust as one likes. These include the Mario theme (which sounds very good), a version of Twinkle, Twinkle, Little Star, and also another interesting melody. From there, one can add notes, remove notes, replace notes, or whatever else. Even just replacing the star noises in Twinkle, Twinkle Little Star with something like Yoshi noises can make for some interesting results. 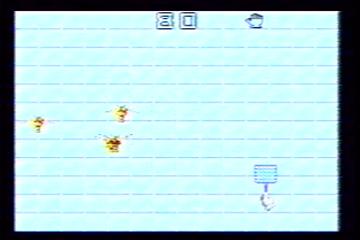 If one is tired of all of one's creating work, however, Mario Paint does also feature a small game to let one take a break and relax, so to speak. One is given a flyswatter, and onto the screen will come a series of flies. First these start off as just simple little flies that don't do anything aside from fly around and make themselves difficult to hit. Later on, however, will come bigger insects, which will fire off projectiles and other such things, which if they hit you, will result in you losing a life. Free lives will occasionally float along as well, and if you catch them you'll get one of your lives back. After one has swatted 100 bugs, a very large boss creature will come by, who will require many more than just one swat to take care of, and is much more vicious in the way of firing things at you. After defeating him, you'll move onto the next level, with increasingly faster and more difficult bugs. It's not the most involved game in the world, but, it can get pretty addicting, works very well with the mouse, and, again, is a nice little break if one needs some time off from drawing and such.

I guess the best way to get a feeling for how different Mario Paint is, is with a bit of a personal note. Two of the major features of Mario Paint are the painting and various artistic things, and also the musical stuff. I'm horrible at art (could hardly draw a stick figure if I had to), and don't care at all for music (and am not any good at it either). Yet, despite those lacks of interest and ability, I can still have piles of fun with Mario Paint. Of course, that's just me. What Mario Paint does though, isn't so much just being a standard drawing and creation tool which happens to be in a game cartridge, as it is making a fun game out of things which involve those aspects. While someone who is interested and does have abilities in these areas would probably get even more out of this game, it's a fun little thing to play around with, even for the less talented and creative among us.