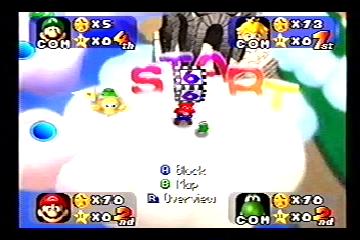 Mario and all his friends have all gotten together for a fun little board game, to decide who is the "Super Star" among them all. Mario Party 1 is set up similar to a board game (think CandyLand or Chutes and Ladders or something), where it has you moving along a game board earning coins and stars and such. The "goal" is to be the one with the most stars at the end of a set number of turns. The graphics aren't really much to speak of, and neither is the sound. They both are decent enough and certainly work well for their purpose. They aren't bad by any stretch, but, it's not like it's something which really plays a major part in the game. The board isn't really the central attraction behind the game, though. It's the minigames. It's not as simple as just rolling a die and moving from Point A to Point B though. As you move along, and at the end of turns, you'll encounter various minigames. These have you competing against the other human or computer players in different tasks, with the winners getting coins. These minigames range from cutting out shapes on a jackhammer, running around grabbing bags of coins while dodging hammers, fishing, following patterns of button pressing, and various other things.

The coins you win can then be used, when you reach certain spots on the board, to buy Stars. Again, the end goal of all of this is to have the most stars at the end of the game. The winner then gets their coins deposited into an account, which you can use in the main area to buy minigames to play on their own, different items, and other such assorted things. One thing that is different in Mario Party 1 that isn't present in the later games is, not only would the winner of a minigame win coins, but, quite often the losers in the minigames would lose coins. This is missing from the later games, where you only win coins in minigames, not lose them. On one hand, the risk of losing coins definitely raises the stakes. On the other hand though, if you're saving up coins to buy stuff, having players losing money really isn't very conducive to that. So, that's good if you're trying to earn coins to purchase stuff, but, it does take away a bit of the risk.

Mario Party 1 features 6 characters to choose from and a total of 8 different boards where play takes place. These range from themed stages such as Peach's Cake to Yoshi's Island to Bowser's Mountain, each with their own particular intricacies and touches. There are definitely a number of very enjoyable locations. While the boards were interesting, and competing to "win" the whole game was fun, again, the real core of Mario Party was the minigames. There is a Mini-Game Island mode, where a single player attempts to go through a series of minigames to reach the "end," without the board and dice setup of the normal game. Then, there's also the Mini-Game House, where you can simply select any Mini-Game you want (that you've bought) and play it. This, needless to say, is extremely fun when you have a couple of other people to play against. Even if you just want to practice a game, or try to beat one of your own scores, however, it's still very enjoyable to go through your favorite set of minigames.

As mentioned earlier, there are a number of different types of minigame setups, depending on the spaces on the board each player is on. You'll either be all working for yourself, paired with another player for a 2-on-2 battle, or have a 1-on-3 battle. Each of these different setups has a variety of games to go along with it. Whether it's everyone trying to avoid falling off moving platforms, a pair of players competing in bobsleds, or a single player in a Bowser suit trying to steal coins from the other players, each setup has its own style and feel.

The one thing of particular note about the Mario Party series in general is, while it's pretty good as a stand-alone single player game, competing against the computer and working toward your own goals, the real heart of Mario Party is as a multiplayer experience. While it's alright by yourself, if you have some other people to play with, the game really is a blast. While it is still worth checking into even if you're only going to play it by yourself, it really is a must if you have some other people to play with. If you can find a couple of people to round up and compete against, you'll get a much longer, and more entertaining, experience out of the game than simply trying to earn coins and starts for yourself.

For someone who has played some of the later games and wants to know why Mario Party 1 is still worthwhile to buy, the important thing to discuss is the minigames. The first thing that probably comes to mind when thinking about Mario Party 1 for many people is, Palm Blisters. Unfortunately, some of the minigames (Tug of War, pedaling a bike, etc.) require you to rotate the control stick quickly. Many people found that the quickest way to do this was to place your palm on the control stick, and rotate using your entire hand as opposed to just your thumb (that is, the preference of Gross motor skills over Fine motor skills). The ridges on the control stick, and just the general motion of it slipping around on your palm, however, caused a great deal of irritation, leading to sores, cuts, or blisters covering your entire palm. Nintendo even had an offer where you could send away from a free Glove to protect your palm. Of course, it's a bit late to make use of that offer at this point.

The selection of minigames is very interesting though. Some of the games have been modified or improved in later versions, but, there are still quite a number here which make the game stand apart on its own. Minigames have different techniques, different styles, and different setups than the later games in the series. As mentioned above, some of the minigames not only involve a player winning coins, but also the other players losing coins, which definitely adds a very strong competitive feel to the game. As well, while they're painful on the palm, the games which involve you rotating the control stick are entertaining as well, and are something which you won't find in the later games. Many of the games in the first Mario Party are more focused on doing one thing very quick (pressing buttons, moving the control stick), and not quite so much skill-based games as the later games have. Not that there's anything wrong with skill-based games (and there are some of them here as well), but, sometimes it is entertaining to see just who can press a button the quickest.

Compared to the later Mario Party games, it really isn't a matter of saying "One is better, one is worse," again, it's more a matter of "This one has a certain selection of minigames, the others have different games." So, even if you have some of the others, this one is still certainly worth picking up. Certainly, one might have a preference for the minigames contained in one of the games over another, but, really, they're all very worthwhile to have. If you haven't played any of the other Mario Party games before, this is certainly a great place to start. Again, it's certainly worthwhile to own a bunch of them for the different selection of games, but, even if you're only planning to buy one, this is still a good choice.

Again, it may not be as high of a recommendation if you don't have a couple of other people to play against. Still, even if it's just you by yourself, the boards are entertaining, and the minigames are fun, even if you're just playing against the computer. Certainly, it's more fun to compete against a person sitting next to you than it is a computer player, but, the computer still provides a good challenge. As well, the boards and minigames are entertaining and very enjoyable on their own. Even if you don't find the computer players quite as much of a challenge as you might a human player, it's still going to take a while winning and earning coins to buy all the different things available for purchase. So, whether you're planning on a single player experience or multiplayer, the game is still very recommended either way.

Although, you might want to be a bit careful about your palm.