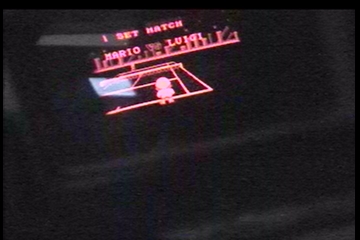 Heads up, the ball’s coming right at you!

In Mario Tennis, you take control of one of seven different players from the Mario series for some tennis.
There are a number of different modes of play, either singles or doubles matches, single games or tournaments, one or three set matches, and you can choose from three different modes of difficulty for the opponent.

If you’re playing just a single game, you can choose your opponent as well.
In tournament mode, you’ll have to try to work your way up past a couple of selected opponents to emerge victorious.
In doubles mode, your playing partner is controlled by the computer. They’re fairly easy to work with, as they basically patrol the opposite end of the court from where you are. That is, if you’re on the left in the frontcourt, they’ll stay on the right in the backcourt, and they move around depending on where you are.

While playing, your type of shot is determined by where you are on the court, in position to the ball, and which of the two buttons you press. Head up close to the net and hit at the ball as it passes over your head to make a fierce smash, or stand towards the middle and hit it on the bounce to place a delicate dropshot.
Each character has their own strengths and weaknesses. Some are quick and agile, but can’t put much power behind a shot, while others are slow and lumbering, but when they smash the ball, you’d better watch out, and others have a nice balance but don’t particularly excel in any specific area.

The camera in the game is stationed slightly behind and above you, and follows you as you move. So, if you move right up to the net, you won’t have much view of the court behind you, and if you move all the way to the back line, you’ll have a wide open view of the court.
The graphics in are very good, with the court, net and ball all modeled well. There are a couple of different backgrounds behind the court, nothing too fancy, but it’s nice to look at.
The music isn’t too varied, but it’s nice and calm, fitting the mood of a tennis match. Sound effects are the basic sounds of the ball hitting the racket, bouncing on the ground, or hitting the net, and other little sounds.

One problem is that, aside from just playing random matches, the game doesn’t have too much else to do. The tournaments are only three matches long, and, aside from the single games and tournaments, there aren’t any other modes. A little minigame or two might’ve been nice. That isn’t really too much of a complaint, if you just like to play tennis you’ll be all set.
The only real complaint about the game really isn’t so much the game’s fault itself, but it is worth pointing out. There is no two-player mode. Granted, the two-player cable for Virtual Boy was never released in the first place, but, the game really could have benefited from a nice little two-player mode.

Mario Tennis is a very fun game, especially if you like tennis in general, and even if you aren’t too fond of tennis, it still can be a fun game to just play around in. The graphics are good and the sound is catchy, there’s a number of different players to try out, and the tournaments provide some extra challenge.
A very good game, and an interesting look at tennis.