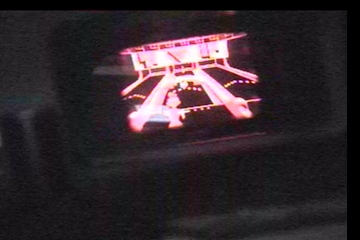 Nester finally has his own video game. Can't you just picture Howard cringing in fear?

If you were a subscriber to Nintendo Power back when it started, you may already be well acquainted with Nester. He and his friend Howard starred in a comic featured in each issue. A few years in, Howard left to pursue "other interests," and Nester ran the comic himself for another few years, until it stopped. In his spare time, Nester also hosted various things, such as Nintendo Power's yearly game awards. In the comics featuring Howard and Nester, often Nester would do his best to show up Howard, by proving he was best at a certain video game, but then he would fail and Howard would have to step in to save the day, with Nester trying to save face. Once Howard left, Nester basically just went out on his own adventures, centered around various game worlds, with some comical results along the way. I wonder what Howard would've said if he knew Nester would end up getting his own video game. Nester and bowling. Who would've figured. He never really seemed like the bowling sort. I guess you never can tell these things, maybe in between all his video game antics with Howard, Nester would sneak in rounds of bowling while no one was looking. Who knew.

So, in any event, here we are, and Nester has his own video game, and it's a Bowling game. As far as the actual play of the game, what you have here is pretty much your average, run of the mill bowling game. You get to enter your name (assuming your name has 4 characters or less anyway), choose between Nester or his girlfriend as your player, choose which hand they bowl with, and choose the weight of your ball. For the normal game, you have the option of choosing either one or two players. If you choose two player mode, both players will enter their information, and as the game takes place, turns will alternate each frame of the game. Once you're done setting everything up, you go off to play.

I won't go through the process of explaining the full rules of bowling, hopefully you're already familiar with how the game is played. Once the game starts, you take control of your character. You can move them left or right to get set up to make your shot. Then, you will set the direction of the ball (whether it's moving right, left or just going straight, which affects how it will hit the pins and which way they will move), and the power behind the ball, by a series of sliders (gauges will be moving back and forth, and you press a button to stop them where you want). Once you've gone through that, you will make your shot. It continues this way through the game, again, as you'd expect a bowling game to progress.

As you play, your bowling takes place on the bottom half of the screen. On the top half is a panel where various animations will play. Both of the characters have a number of different reactions they'll give to each shot, whether it's celebrating because they got a strike or getting upset because they missed some pins. As well, there are animations between the ball and pins, such as the pins jumping over the ball. There are other animations you'll see as well, there are enough different animations to keep you entertained throughout the course of the game.

The two other modes are a Practice mode and a Challenge mode. In the Practice mode, you can choose from a list of different pin setups. Difficult shots you might want to practice, such as a 7-10 split, or just various other arrangements of left over pins that might occur as shots you'd have to make at some point. The Challenge mode is basically like a random sampling of choices from the Practice mode, where you go through a "game" of trying to make a series of difficult shots, and at the end it gives you a score based on how you did.

So, alright, you have a good general idea of the game. So, where does the "funky" come in? The game is called "Nester's 'Funky' Bowling" after all. Well, to be honest, there really isn't too much "funky" about the game. As mentioned, the gameplay itself is pretty much just a straightforward bowling game, nothing too surprising or out of the ordinary there. I guess the "funky" part comes in with the different animations that the characters do after each shot, which are rather entertaining, but, of course, don't really change the actual play of the game any. The game is more or less just a matter of finding a good spot, a good angle, a good power, and repeating it time and again. At least, the main game anyway. Both the practice mode and the challenge mode do provide a number of different looks at things though. So, if you are looking for some twists aside from continually lining up at the same ten pins time and again, that's there, and that's definitely a very welcome addition.

Graphics aren't anything really too special to speak of. It does look alright, and there are a few instances where the Virtual Boy's unique setup is made use of, but, for the most part, it really isn't much of anything that probably couldn't have been done on another system. Which isn't to say they're bad of course, everything looks good enough, there are no complaints. Just, if you're hoping for some nifty Virtual Boy tricks, there isn't too much of that here. Sound is adequate, there are three different background musics to choose from which all sound fine. Likewise, there are various sound effects throughout the course of the game, the ball hitting the pins or different noises and effects during the animations that play. Nothing too fancy there either, but, again, nothing specific to complain about, it works fine.

As far as replay goes, well, there is a high score list in the game, but, unfortunately, it's cleared when you turn the system off. Of course, you could just keep a record yourself on a piece of paper or something, but nonetheless. Honestly though, unless you have someone to compete against, the main mode can get rather stale after a while. Not to say it's bad, just, there's not too much that changes in it, it's the same thing round after round. Of course, that's probably what you were expecting, there really isn't too many ways to "mix up" bowling without changing the rules (unless you want pins that try to dodge the ball or something), but nonetheless. That said, it is fun to sit down and play through a few rounds every now and then, keeping score yourself or playing against someone else. The real replay value, however, comes from the Practice and Challenge modes, where you are presented with a number of different difficult shots for you to try. There is a decent variety of choices in this mode, so, until you master all of them, there's always something challenging to try here.

At the core, however, there isn't any escaping what the game is, which is, a bowling game. If you like bowling, odds are you'll like this game. If you don't like bowling, however, there isn't really anything here that's going to change your mind. It does what it sets out to do well enough though, and, if that interests you, then it's definitely worthwhile to pick up. While much of this review was spent pointing out that there aren't really any "funky" surprises, the fact remains that it is a rather solid bowling game. If that's what you're looking for, then this is as good a place as any to get it. It's not worth buying a Virtual Boy over, but, if you own the system already, it certainly can't hurt any to pick this game up.

Now, if they'd just bring back the comics, we'd be all set.