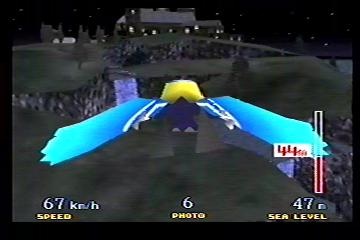 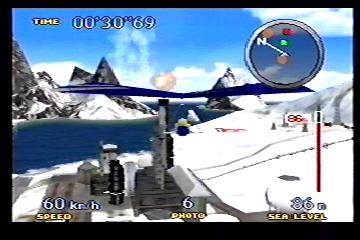 The three main modes of Pilotwings 64 are Hanglider, Rocket Belt, and Gyrocopter. To start, you are given access to the first stage in each of the modes, with one test in each of the modes. Each test will give you a set goal, such as flying through rings and then landing, and will grade you on a variety of areas, such as time and landing accuracy. Once you’ve scored high enough on the first stage, you’ll be given access to the second stage, which contains two tasks. For the second stage, your scores for both tasks will be added up, and the cumulative score being what advances you to the next stage. The third and fourth stages each have three tasks. Each category moves independently of the others, so you might choose to complete all of the Gyrocopter stages first and then go back do the other ones, or might decide to deal with all of the modes for each level at the same time before moving on to the next level. Once you’ve reached a certain score on each mode of a particular level, you’ll also open up bonus stages, such as Birdman and Sky Diving.

You have six people you can choose from to complete your tasks, with each one having their own strengths and weaknesses. For a hanglider stage, you might want someone who is small and light so you can stay afloat, whereas in a rocketbelt stage with a strong wind current, you might want someone big and sturdy to be able to maintain their course. Between all of the tests in the normal modes, you’ll have a total of 27 total tests to deal with. You’re graded on a scale of 0 to 100 for each of the tests. The beginning tests are things as basic as just flying through a few rings and landing, or hitting a balloon and returning to the target. Later tests will have you doing a variety of things, such as taking pictures, firing missiles at targets, trying to reach set heights on currents of air, and many other things. Certainly there’s a very high level of challenge toward the end.

Regardless, it’s only a matter of time until you’re done with all the tasks. While you can push yourself to get better scores, there’s a fine line between challenge where you know if you keep trying you’ll do it eventually, and the feeling that you’ll never be able to do something no matter how many times you try. If you’re trying to get all perfect scores on everything, the last few hanglider stages can move a bit onto the wrong side of that line. Nonetheless though, you don’t need to do that for any specific ingame reason, it’s just more of a personal challenge. Even if you do manage to get all perfect scores, what’s left for you then?

What’s left is the experience of the game. What you do when you have no set purpose in mind, when you don’t care about score, when you’re just having fun. There’s more than enough room for messing around to your heart’s content. For instance, in any of the gyrocopter stages, which you do have a fuel gauge, it’s not as if you have barely enough fuel to complete the task, you have enough fuel where you can veer off from your set course and just fly around. Gliding about with the hanglider is very enjoyable as well, although you do have to constantly be looking out for currents to keep you afloat. In all of the modes, there’s many things to see and do which have nothing at all to do with any task at hand.

Then there’s the birdman stage. This bonus stage, unlocked once you’ve reached sufficient scores on the main modes, simply consists of you flying around. There is no fuel gauge, no time limit, no goals, nothing other than you, the wings strapped to your arms, and the air. You’re free to fly around through any of the land areas that you’ve explored in other modes, gliding, diving, rising, and exploring. You can also choose the weather time of day before you start, so you can fly around in the clear morning sunlight, or glide along under a moonlit sky looking up at the stars. As in the hanglider mode, you have a camera at your disposal, and can take pictures of anything you see that interests you. Even once you’re done, you can choose some pictures to save and keep them to look at later in your own little virtual photo album.

Certainly there’s more than enough challenge in the tasks the game provides you where you’ll get an excellent game out of that alone, that shouldn’t be overlooked at all. Even if you have no interest in exploring or flying around aimlessly, there’s a very good set and structured game to be had. Pilotwings 64 is the type of game, however, where you don’t have to be doing anything productive at all to have fun. It’s a game of experience, a game of exploration, a game of fun. Not everyone has access to their own airplane to go soaring through the clouds, or a hanglider to go gliding on the wind, and even if you do you’re probably a bit more careful about flying a few feet from the side of a cliff than you are in the game. The graphics are beautiful, with detailed land and water areas to explore, houses, landmarks, trees, and many other small details. The music is gentle and relaxing, fitting the mood of the game perfectly. Pilotwings is your own personal escape from the world around you, to just be able to fly through the air and forget all of your other cares.