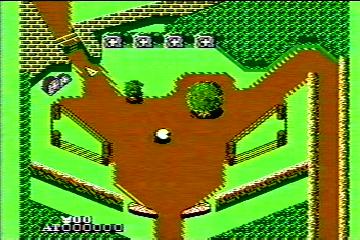 The Quest mode is where things get interesting.
You open with a view of the royal throne room, where the pinball king and queen are happily sitting there minding their own business, when all of a sudden some mean looking characters barge in and kidnap the queen. The royal guards do their best to fend off the attackers, but to no avail.
So, off you go after them to save the queen.

Your game starts on a pinball table. You notice an odd-looking tombstone off to the side of the table, and when you strike it with your ball, a ghost comes out. He tells you he used to be a member of the royal guard, but is now dead. He’s been waiting for someone like you to come along with the courage and ability to save the princess.

The quest mode is basically a progression up. If you fall down from the bottom level, it says you die, but you start over from that point. In each section of table, there’s an area where you can shoot which advances you up to the next section. Falling down from a higher section drops you down to the previous section, and you must make your way back up.

On your journey to save the queen, you’ll run into a number of different enemies which you must defeat by hitting them with your pinball. At the end of each main section of the table is a boss of sorts, who you must hit numerous times to defeat.
Once you defeat a boss, you’ll move up to a special area where you’ll have a chance to purchase upgrades from a store. Getting points and defeating enemies on the tables earn you money which you can spend at this store, where you can buy things such as table stoppers to keep your ball from falling down, or stronger flippers which will cause your ball to do more damage to enemies when you hit them.

Make your way upwards, past the many foes and impediments, and save the queen.

Ok, so the story isn’t all that deep and involved or anything, and it’s not like it’s some lengthy quest or anything, the quest mode can be beaten in around 15-20 minutes.
Still though, it’s an interesting twist, and is pretty fun. Considering the game has three normal pinball tables as well, for if you’re just in the mood for some plain pinball, the game is a very well-rounded package, providing you with something different and new, but also with some interesting basic things. Depending on what you’re in the mood for, there’s always something to come back to, be it just wanting to play around on the normal tables, or to give the quest mode another run through.

The graphics and sounds aren’t anything overly special. You have your standard sounds of flippers hitting balls, balls hitting bells and such. Each table has its own background music which is good enough and fits the theme of the table. The graphics work well enough, pinball tables with some pictures and such. The quest mode has some different things, such as trees and enemies and such. The different levels of the quest mode each have a different look to them, from the appearance of an outside area to a castle and such. Nothing too complex, but everything looks decent.