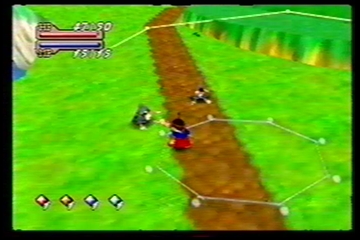 Well, just by default of being one of the only RPGs on N64, that automatically makes it one of the best RPGs on N64. Does that necessarily mean it’s a good game though?

Gameplay 8/10
While Quest is an RPG, it differs from the standard format of an RPG in a few important ways. The most notable of which is the fact that there is no general “EXP” or “Experience Points” counter. Instead, stats are broken down into categories, and the more you use them, the more they increase. If you tend to go up to things and whack away at them with your staff, your Hitpoints will go up quicker. If you tend to stay back at a distance and attack with spells, your Magicpoints and spell gauge will increase quicker.
As for spells, magic is broken into four separate categories of spells. As you fight, a spell gauge will fill up, and when it is filled, you’ll have the chance to increase your magic in any one of the four fields. Each spell category has a variety of spells in its series, such as the Water series which starts off with simple water-based attacks, and later on healing and escaping magic, as well as more powerful water attacks. You can increase whichever of the categories you wish, but the spells in the category come in a series, so, to get to the higher-power spells in a series, you’ll have to pour your points into them. There are also scattered about the landscape little wisps of magic which you can find, which will let you add another point the same as filling up your magic gauge would. Another notable gameplay difference, and certainly one of the more awkward features, is the complete lack of any gold/money system or equipment and weapons. There are items in the game, which have various effects such as healing you or such, but, there are no stores at which to buy them, you either just find them from enemies or there are a few people in the game who will give you an item if you don’t have any of them, but you can’t get additional ones from them. What this means is, if you’re heading into a big battle and would like to have a nice supply of healing items, unless you’ve been saving them along the way, your only choice would be to go back and fight some weaker enemies in the hopes they might drop an item you’re looking for. As far as weapons and armor, again, your attack and defense power increase as you battle, but, there are no weapons or armor you can get to increase them aside from that.
Also of note is the battle system. Enemies are randomly encountered, and, when you encounter an enemy, the battle takes place right on the land where you were, but, a movement octagon appears around you, all of the enemies, and the battlefield. You can only move within your octagon, as enemies can only move within theirs. You can only attack an enemy with your staff when you are near enough to them to strike. Spells may be cast from anywhere, but, some require you to line up with the enemy so that the spell path encounters the enemy. You can escape from a battle by moving to the outside of the battlefield. All in all, the gameplay isn’t exactly what one might expect, certainly has its faults, but overall it works well enough, and is quite enjoyable.

Control: 6/10
Holding the B button swings the camera around towards your back, although not perfectly behind you. Other than that, you have no direct control over the camera, it just slowly moves around as you walk.
While there is an in-game compass and map, as battles take place right where you were walking and wherever you move during the battle is where you end up when it’s done, it’s very easy to become disoriented after a battle, quite often leading to retracing an entire path backwards before realizing you’ve been heading back the way you were coming before the battle. In this regard, it would’ve made things much easier if they’d put you back in the place and facing the same direction you were when you encountered the battle. The control does certainly have its issues, and it does detract from the overall ease of play of the game.

Graphics/Sound: 9/10
Up close some things, particularly people, can look rather blurry. Aside from that though, the graphics are quite good. There are many varied landscapes you will come across, all very expansive and fun to explore. There are quite a number of different enemies which you encounter as well, which are all very interesting.
The music is rather enchanting. It’s usually nothing too fancy, but it does change quite often depending on where you are, and all of the music goes along with the mood and tone of the game well.

Story/Length/Replay: 8/10
A magical book has been stolen from the monastery where you and your father live. Your father went to look for the book, but has been gone for over a month without word, and so you decide to go after him. Along the way, of course, you’ll run into a whole bunch of people to talk to, many of whom have their own problems you’ll have to help out with as you progress on your journey.
The game itself will take a decent amount of time to beat, probably in the area of around 30 hours. There’s many interesting areas to explore and people to talk to along the way, so, while there isn’t any specific sidequest or reason to play through the game again, it’s still quite fun to play through, to explore, talk to people, try out different spells and such.

Overall: 8/10
The game certainly isn’t without its flaws, particularly in control and the whole gold/items/equipment issues mentioned above. Overall though, it’s still a very fun game, with good variety to the spells and stats, and good battle system, and interesting lands to explore.
Again, if you’re just looking for an RPG on N64, you’re not going to have too many other choices aside from this, but, even if you’re just looking for a fun game to play in general, it’s certainly worth trying it out.