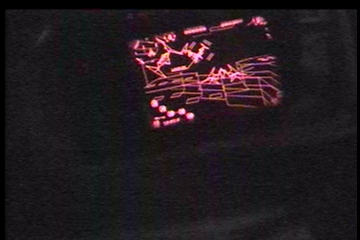 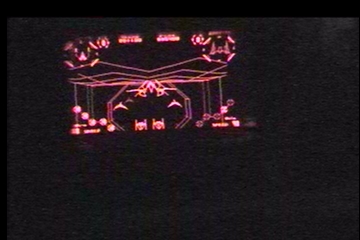 Certain games just seem like a perfect match for a system, as if the system was made just for it. A primary example would be Mario 64, shining out as the jewel of the N64's launch, with a controller and system which worked perfectly with the various aspects of the game. Another great match was Tetris with Gameboy, a game which was impossible to put down along with a system that you never had to leave behind. With the Virtual Boy, even if not necessarily the best game on the system (with that honor likely falling to Wario Land), when one looks at the Virtual Boy, with its style and capabilities, and then took a look at Red Alarm, they just seem like a natural match.

Red Alarm is a flying game that seems very familiar in style to a game like Star Fox. One is controlling a ship, flying ahead as enemies and whatnot fly from in front of you. It's not a strictly straightforward progress, one does have the option to stop and turn around and something. Still, it's not really the main focus of how the game progresses, and, really, if one does stop or get stuck somewhere and needs to back away or something, it gets much more confusing. So, the best way to go about playing is just to fly on ahead, without really worrying too much about it.

The main thing that really stands out about Red Alarm, and why it seems such a natural fit for the Virtual Boy, is the way the scenery is displayed. Everything is done in a 3D-like arrangement of lines making up the surroundings. If one were to do a demo if the sort of display which was possible on Virtual Boy which really made it different from other things out there, it's the sort of look one would likely choose to highlight it. With one's face up against the system, seeing nothing but that red and black display, it really draws one in, and has a very nice feel to it.

Of course, Red Alarm is much more than a Virtual Boy tech demo, and, while its style really serves as a display of the system, the important thing is that it's also a very fun game to play. The heart of the game, that of a flying shooter, is there and as solid as one might hope. While, as noted above, the fact that it doesn't force one to go forward all the time and that one does have the option of stopping or going back or something can make things a bit awkward, it's easy enough to avoid that and just fly along on one's path. There are some areas (in particular fights against more major enemies) where one does have to circle around on them and make use of that, but, in those areas is does fit the feeling of play well enough. In addition to the normal flying control setup, the right D-pad also serves as a quick boost in any of those directions. So, if one needs to quickly go up or dodge to the side or something, one can make use of this pad for that. While this sounds simple enough, it does actually work really well with the game, giving things a bit more involvement than just steering around normally.

Along with the particular display of the game, and the unique appearance to that, Red Alarm does also have some nice looking designs to the areas. Of course, with everything just all being lines there's only so detailed things can get, but, again, it just really seems to fit the feel of the game. To go along with that, the music of the game is very nice, and, along with everything else, serves to further pull one into the atmosphere. Within a matter of minutes, with the focus just being so directly on the game, one can easily forget that one is in fact sitting there staring into the system, and just become immersed in everything that's going on in there.

When firing, shots will automatically lock on to near-by enemies. This is convenient, but does also serve to make things much easier, since it makes it simple enough to just keep hitting that fire button as one is flying, and the aiming will take care of itself. Not that there's anything wrong with that, as trying to position one's shot exactly on an enemy could be a pain if it made one do that. Still, it's not particularly difficult to go flying through most of the enemies. The game features three difficulty levels, depending on the amount of challenge one is hoping to find. Even on the hardest setting it's not the most difficult game in the world, but, it does put up a pretty nice challenge. As well, unfortunately the game isn't quite as long as one might hope, and, especially once one gets good at the game, it's not going to take one long to go through it. Still, even so, it's a very enjoyable game through all the levels it has anyway.

While it's not necessarily a game which would be reason enough to go out and buy a Virtual Boy by itself, if one already has the system, the game is fairly inexpensive and definitely worth checking out if only to expand one's library for the system a bit. It does have some competition in the flying shooting sort of game on the system with Vertical Force, but, while that game is fun as well, it doesn't make use of the Virtual Boy nearly as much, and while it's worth checking out as well, Red Alarm definitely does a good deal to set itself apart from that game. So, if one already has the system, and is into this sort of game, it's definitely worth checking out. Not just because of getting another Virtual Boy game either, but simply because it's fun, regardless of what system it's on. If one doesn't have a Virtual Boy, again, it's not necessarily worth running out and buying the system just for this game, but, if one does ever decide to check the system out, it's definitely a game to keep in mind.