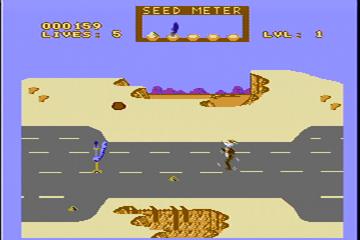 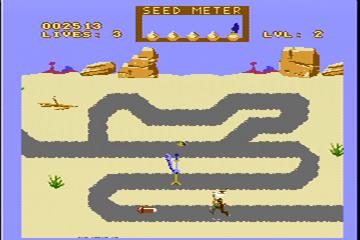 Most Tengen NES games are quite easy to spot looking over a selection of other NES games. The distinctive solid black cartridges, with a slightly different shape, and missing that golden "Nintendo Seal" make them stand out very readily. The story behind Tengen's experiences with Nintendo is one more often told in relation to a more well-known instance of their "Tengen Tetris," offering direct competition as the "other" Tetris available for the NES. Also well-known is their home version of Gauntlet, one of the more enjoyable multiplayer games for the NES. In addition, other standout games such as the RBI Baseball series have made these odd-colored cartridges notable not just for their unique look, but for the quality of the game they contained. Some, however, aren't quite as well-known or talked about, and among them is Road Runner for NES.

Road Runner for NES is a video game version of the television antics provided by the titled speedy bird and Wile E. Coyote. In their shows, the coyote made use of his speed - far short of that possessed by the road runner - and a variety of crazy gadgets to chase after what he hoped might be his dinner. The video game version attempts to replicate this, placing the player in the position of the road runner, fleeing from the clutches of the coyote. Many of the same aspects from the television show are placed within this video game. While the basics are there, the feeling isn't quite the same, and the total package comes up a bit short of the slapstick and hilarity that might be hoped for in this game.

With control of the road runner, play takes place in the sometimes awkward format of heading from the right side of the screen toward the left, contrary to the "left to right" flow that most games use. After a bit it does become more natural, but, it takes some getting used to. While running to the left, of course, the fleet-footed fowl will be followed by the crafty coyote, intent on tracking it down. Similar to the show, the road runner is able to easily outpace the coyote in a straightaway dash with all else being equal. Unfortunately, there aren't too many straightaways, and all else isn't always equal. The road will take many twists and curves, and sometimes lead to branching paths and dead ends. While the road runner is attempting to make its way through all of these, the coyote will sometimes be chasing on foot, but at other times making use of a jet-scooter, a rocket-powered pogo stick, or other such contraptions aimed at making it easily for him to catch the road runner. So, it's far from a leisurely run down the road, with the coyote often bouncing or swooping in from unexpected angles to catch the road runner.

One thing that is at times frustrating, especially on some of the easier stages, is what happens if the coyote is chasing the road runner on foot, and the road runner moves far enough ahead so as to move the coyote off the edge of the screen. When this happens, the coyote will instantly hop onto a speedy contraption and make a few quick dashes at the road runner, often from extremely difficult or unexpected angles. What this means is that, despite the urge to run as fast as possible to keep away from the coyote, it's best to stay within somewhat close distance to him, often meaning that it's best to just stand in one place while he catches up a bit. This does add a bit of strategy to the game, and sometimes in the show the road runner would enjoy in letting the coyote think he was going to catch up only to zoom away again, but it's often contrary to one's first instinct as to how to play. Of course, on levels where the path is particularly convoluted and there are many obstacles, there often isn't the chance to build too big a lead on the coyote, so sometimes it's simply trouble enough to stay ahead and away from him.

All this running takes place within a familiar desert landscape, with backdrops consisting of stand, cacti and rockets. It's not the most exciting surrounding, but on the other hand it is the desert and it's fairly accurate to that. The road that the running takes place on has a couple of different formations, eventually leading to an end where scores are totaled before moving on to the next road. After a short while these road formations will repeat, with extra obstacles being added in. While this repeating formation does cut back on the feeling of length from the game, the task of staying ahead of the coyote does still keep up its steady challenge.

While running, however, it isn't just a matter of staying ahead of the coyote, as there are other things to take into consideration. The foremost of these is the presence of birdseed scattered about the road at various points. Eating this seed will keep the road runner's seed meter at full, and missing seed will cause the meter to decrease and the road runner to slow down, and eventually be caught by the coyote. So, going out of the way a bit to collect this seed is often and important goal. While it is possible to miss a couple and still be fine, a point bonus is given for collecting the seed as well, so, for scoring considerations, getting all this seed is a good challenge. Unfortunately, while trying to get this seed and avoid the coyote, there will often be other obstacles. First, as noted, the path is sometimes winding and with the occasional dead end - sometimes with seed at a dead end. So, simply getting to the seed isn't always easy. As well, while running along, occasionally a large truck will come racing from the left to the right, putting the road runner, and the coyote, in danger of being squished. If one is careless this can lead to a flat road runner, but if timed well, it can also be used to squish the coyote, giving a bit of a reprieve. On the road along with the birdseed will be the occasional land mine or oil slick as well, which can either be avoided or jumped over using the road runner's "make a beeping noise while jumping in the air" thing that it does. There are also a couple of places where there are small gaps in the road which will need to be jumped over lest the road runner learn a thing about the effects of gravity.

As is the case with some games, this process never really ends; it just gets progressively more difficult, until one runs out of lives. The challenge, then, after getting through the basic stages a couple of times, comes in trying for high scores. This makes things like collecting all of the bird seed or figuring out ways to squish the coyote more important, and a heightened challenge to avoid dying while doing all of this for as long as possible. Of course, given the small variety to the levels this can quickly wear thin for many, and even for the more score-interested people the predictability and familiarity of everything can lead to getting higher scores being an often monotonous process. The game is best experienced in short periods, and it's fun for what it provides, but as far as a lasting or deep experience, it definitely comes up short. For fans of the show, there are some fun references and a bit of the same feeling, but again the main issue is the lack of variety and depth, and things will soon wear dry. If one is looking for a game featuring the racing and chasing duo, a better choice would be Road Runner's Death Valley Rally for SNES. The most notable reason to pick this game up is simply if one is looking to add a bit of color and variety to one's NES collection. Still, if one enjoys the show, and racing games of various sorts, and doesn't mind a somewhat short experience or really enjoys challenging for points, it's a game at least worth checking out.