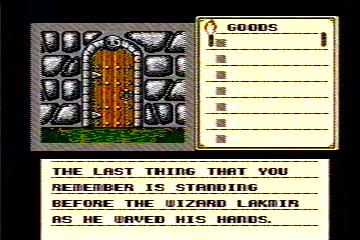 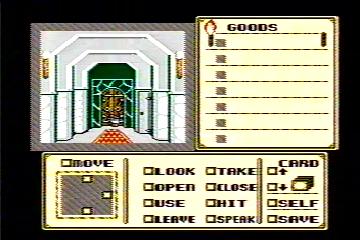 The first thing to mention would be, Shadowgate certainly isn’t going to be a game that’s going to appeal to everyone. You could pick it up, spend 5 minutes with it, decide it’s the most boring game you’ve ever set your eyes on, and never want to touch it again, and be completely right. While that’s the case, this review is written assuming that one doesn’t have that initial reaction to the game.

Gameplay: 10/10
The gameplay is very slow and deliberate, but still very engaging. Basically, the game is made up of a series of rooms in a castle. In each room, there are possibly a number of things one can interact with. One does this by making an action choice from a menu, such as “take,” and then moving a cursor onto the object in the room that one wants to interact with, such as a gem on the ground. Doing so would take the gem from the ground and put it into one’s inventory. From there, one might be able to use it later to active a secret lock to open a door. Or, of course, it might’ve just been a useless stone with no point to it. Most objects do have a use, but not all do. It’s up to you to find everything you can, figure out what uses they might have, and to progress your way through the castle.

Control: 7/10
Everything in the game is done by selecting an action from a list of choices, and then something on which to do it. For instance, to move from one room to another, one would select “move” from the menu and click on an open door, which would then move you through the door into the next room. It’s not the quickest or most intuitive thing in the world, but, it works well enough and without much problem.

Graphics: 8/10
Each room you enter is more or less a static image, with the exception of a few items that can be manipulated for minor changes. You only get one view of each room, and there’s no moving around within the room. So, there wasn’t too much in the way of variety for graphics that needed to be done. All of the rooms, however, are modeled quite intricately, and of what there is in the way of graphics, it does all look very nice.

Story: 10/10
You’re basically dropped off into the middle of the story. You start off at the door to the castle, with it explaining what lead up to this point in a series of messages. A wizard sent you here, telling you that your quest lies within the castle. That you, as the last in the line of kings, must find and destroy the warlock lord within the castle. So, with that, you make your way into the castle to fulfill your quest. As you make your way through the castle, you pick up bits and pieces of a much larger world and story around you. Shadowgate has a very rich world, and draws you into it well.

Replay: 7/10
Much of Shadowgate is built on finding items, and figuring out where they’re used. Some of the item uses are a bit vague, requiring a bit of simple trial and error at times. Once you’ve gone through the game, of course, you now know all the answers to the puzzles, and there isn’t any specific reason to go through the game again, no sidequests or alternate endings or anything along those lines. It’s still a very fun game to play through though, and, as one isn’t always going to have a photographic memory of the puzzle answers, there is still some figuring out to do when going through the game another time.

Overall: 10/10
Again, while it isn’t the type of game that’s going to appeal to everyone, if you don’t mind a slower-paced game which requires a large amount of exploring and thinking, this is a great game. Very fun to play through, explore, and interact with, and will keep pulling you back into its world.