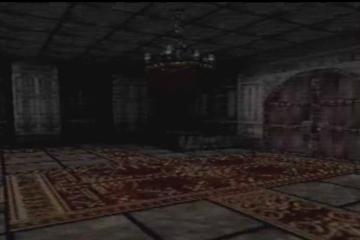 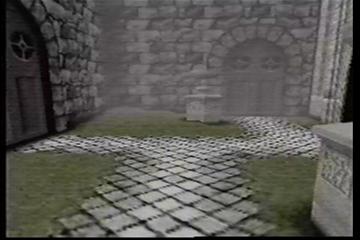 Shadowgate 64 is really either the type of game you love or you hate. There isn’t too much middle ground on the matter. In the first ten minutes of playing, you’re probably going to decide one of two things. you’re either going to decide it’s the most boring thing you’ve ever played, and that you’d rather go do something you thought was more interesting, like read the dictionary or watch grass grow or something. That’s a distinct possibility. The other possibility is, you might decide it’s one of the most wonderful games you’ve ever played, and wish it would never have to end. That said, while you could decide that with only a few minutes of play, you’re probably reading this review not having the game, and not wanting to go out and spend the money if you don’t have to, and are wanting an explanation of what the game is about and what it’s like, so you can make that decision before instead of after.

At the start of the game is a little movie, with you riding along on a caravan when all of a sudden it’s attacked, you’re captured, and tossed into a dungeon. You’ll find out a bit more about why that happened later in the game, it’s not as if some people were just randomly looking for someone to toss in a dungeon, but for now that’s where you’ll find yourself. When you assume control of your character, you’ll find yourself in first-person view, and that’s where everything you do in the game will take place. The control stick adjusts your view, and the C buttons cause you to walk. It works very well, allowing you to fully explore every crack and crevice you come across. Progressing in the game is a fairly simple matter. You just have to pick up every single item you can find, and figure out where it’s used. Well, it’s more than that really, but, that’s a condensed version. Obviously you make your way out of the jail cell you start in (wouldn’t make for much of a game if you were stuck in a box the entire time). You’ll be making your way through hallways, towers, outside and through towns, exploring, finding items, talking to people, discovering clues as to where you are and what you have to do.

Shadowgate 64, being the sequel to Shadowgate for NES, does rely fairly heavily on the background story laid out in the game. If you haven’t played Shadowgate for NES, you’ll initially find yourself feeling a bit confused at some point. There are a number of books scattered around which you can find and read, which will reveal much of what you would’ve found out from having played that game though, so, in the end you will get most everything you would’ve either way. If you have played Shadowgate for NES however, you’ll immediately find yourself in a world and a situation you’re familiar with, but with a whole new story to experience. The books you will find also contain much new information even to someone who is familiar with the Shadowgate world, and things will open up before you. Needless to say, there is a significant amount of reading that goes on in this game. While you don’t actually need to find or read any of the books in order to complete the game, if you don’t you’ll be missing out on a large part of the story, and find yourself confused at many points. So, if you’re not fond of reading, you’re probably not going to enjoy your experience in the game too much.

Further elaborating on the gameplay, it should be made clear that, really, exploring and finding items is all there is. There are no enemies in the game. None. (Well, one or two small things that one could view as an enemy, but, all you have to do to get rid of them is to solve a puzzle or such, there’s no actual combat). There is one maze where you’re timed and will have to pick up your pace going through it, and one or two areas where you’ll have to do a bit of sneaking around to make sure you aren’t seen. Other than that though, the game progresses at your own pace, with you having as much time as you need to look fully around every room you come across, stop, backtrack, explore, wander, anything you want. Now, at this point, it’s possible you’re asking yourself what the point of the game is then, if there are no enemies and essentially no skill/dexterity-based areas. Well, the point of the game is simply, to explore, and to figure out how to continue. That’s all. Nothing more, nothing hidden, what you see is what you get. So, if that doesn’t appeal to you, you could probably just stop reading the review at this point, there really isn’t anything that’s going to be said from here on down that’s going to change your mind. If the core gameplay doesn’t appeal to you, there’s not much hope of you enjoying the game. There’s nothing wrong with that, as I said initially, that’s a perfectly acceptable response.

Moving on from here though, we’ll be going with the assumption that the core gameplay does appeal to you, or at least that you’re interested enough to hear more. If you’ve played graphical adventure games in the past, this is essentially along those lines. Like the original Shadowgate, but in 3D with you having complete freedom to move around and explore everywhere. You’ll find dozens of items, most of which you’ll be using at least one place or another, and some more. You’ll come across clues in books or from talking to people you run into while walking around. Most everything has at least some sort of logical basis behind it, there’s very little trial-and-error that you’ll have to go through. While your entire adventure takes place within the walls of the Castle Shadowgate, you’ll still be exploring a decent variety of areas, from the tops of towers and the bottoms of dungeons, to wandering through the town within the castle, or through a graveyard or a park. The graphics in the game really are excellent, while you’re not going to have any fancy flashy movies or anything, everything in the game really looks excellent, exactly like you would imagine it to look. A few of the people you talk to will look slightly blocky or stilted when they move, but really, that’s only a very minor thing. Graphically, the game really is just as it should be. Background music isn’t anything overpowering, it’s just a sort of subtle thing that stays in the background. There are a number of different ones that you’ll hear however, all fitting the moods of the areas very well. There are also a number of sound effects, from you hitting a wall, metal hitting against rock, water dripping, and all of the other small details.

If you’re playing through the game for the first time and don’t know any of the solutions to the things you’ll run into, it will probably take you about 8-10 hours to go through the game. If you play it immediately after playing through it, so everything is still fresh in your mind, you can probably breeze through the game in around 4-5 hours. Unless you have a photographic memory however, if you leave a few months in between your playing of the game, it’s really almost like a new experience each time through. While you’ll probably remember things as you come up to them, it’ll probably still take around 7-8 hours. It really is a game to play through often, either every few months so you feel like it’s almost new again, or even if you want to play it more often, just to go through it, explore and wander, and experience everything. It really is a very enjoyable game, and if it is the type of game that appeals to you, it’s likely going to be something you’ll love.