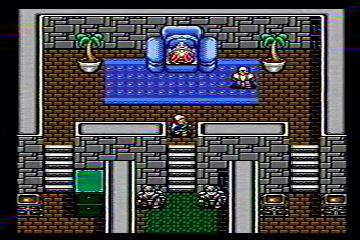 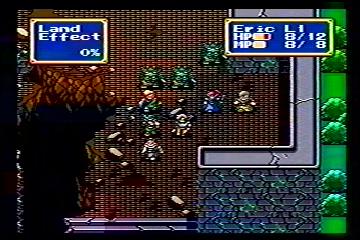 Shining Force is an RPG with a slightly different approach. As opposed to simple turn-based battles where you suddenly leap across the screen to swipe at your enemy, you’re actually moving each of your many characters around on a map, and when you get within range, then you can attack.
It may not be what you’re used to, but it’s very fun.

Gameplay: 10/10
When you start off the game, your party consists of 6 characters. Along the way you will have the opportunity to pick up many more characters, but, you can only use 12 in a battle, so, once you get more than 12, you’ll have to choose which ones you want to take with you, and the others will have to stay behind. You can switch the active characters at your headquarters within a town, but, once the battle starts you have to stick with the selected ones.
Battles take place on the map screen where you were, so, if the battle started when you entered a castle, you’ll have to deal with all the walls and other obstacles to move around. Moving/attacking order is turn-based. When one of your character’s turn comes up, you can move them to any square anywhere within the highlighted movement area. You can only attack an enemy that’s within your weapon range. That is, if you have a sword, you’re going to need to be in the square next to the enemy you’re trying to attack. If you have a bow you’ll be able to stand back a square or two and attack from a safe distance. Each of the squares of land for the battle have different properties to them, which can affect your character’s attack. That is, if you’re standing on a forest square, you’re probably going to have a bit more trouble than if you’re standing on a plains square. While fighting, the battle ends if your main character dies. If any of your other characters die, the battle continues on, and you can just pay a fee to have them revived when you next come to a town.
As you fight enemies, or heal yourself or pretty much any other type of action aside from doing nothing, you’ll gain experience points and levels. After you reach level 10, you’ll have the opportunity to promote a character. You can promote a character any time between levels 10 and 20, and at level 20 the levels stop increasing. What promotion does is, basically, changes your character into an upgraded version of their class, and sends you back to “level 1” sort of, taking away a small amount of the stats you’d gained but allowing you to then continue gaining levels and advancing in stats.
As the only battles that you have are ones directly in the storyline, that is there’s no random battles or other such things, if you want to gain some extra experience, you’ll have to fight a battle to near the end, retreat from it, and then start over. While you don’t really have to do much extra leveling up other than what one does during the normal course of the storyline, it might’ve been nice to have a sort of “training grounds” or something for that sort of thing.
Regardless, the gameplay itself is very good, with all of the battles having a deep feeling as opposed to just random hindrances, and the battle system itself is great.

Graphics/Sound: 10/10
All of the characters are modeled nicely, towns are very detailed, there’s a wide range of different places for you to explore. During a battle, when you engage an enemy in combat, you also switch to a different battle screen depending on where you were, which looks very nice and has some good animations and spell effects.
The sound and music in the game is also all very nice, if a bit repetitive at times. Some nice battle music, town music, exploration music, as well as sword swipes, spell sounds, and such.

Story: 9/10
The story is broken down into chapters, which have a main subject title kind of letting you know what you’re going to be doing in that chapter.
For the better part, the game advances along the path of, go to a town or area, find out what you’re going to do there, head out and do a battle, head to the next town or area. It may sound a bit stilted and overly structured, but it really does flow along very well, so that each battle really feels like the next logical step in the storyline as opposed to just some impediment put up to block you from the next place you want to go.

Length/Replay: 9/10
The game itself is fairly lengthy, and even if you choose to go directly through the game only doing each battle once, as opposed to retreating and doing a battle many times for experience, and it is certainly possible to just go straight through the game without too much problem, it’ll still take quite some time.
Once one has beat it, there really isn’t any specific storyline reason to go through again, aside from a few hidden characters basically everything else there is to encounter one will have done the first time through, it still is fun to play through many times. As you can only have a certain number of characters in your party at a time, you could go through again trying out different characters and such.

Overall: 10/10
One of the primary reasons I bought a Genesis in the first place, and one of the first games I had once I got the system, Shining Force really is a great game. If you like RPGs, and you like battles which give you a great deal of control over what you’re doing, this is really a game to get. Even if you’re used to more “standard” RPGs, this would be an interesting change to try. The battles can be fairly lengthy and require a decent amount of strategy, so, if that isn’t your thing, that might turn you off to the game. Also, of course, if you just don’t like RPGs in general this game probably isn’t going to appeal to you. Aside from that though, this is really one of the best games for Genesis, and if you own the system, you really should at least give it a try.