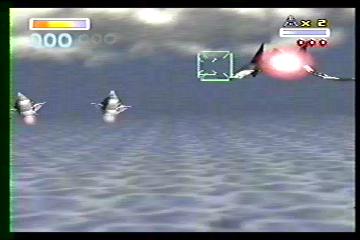 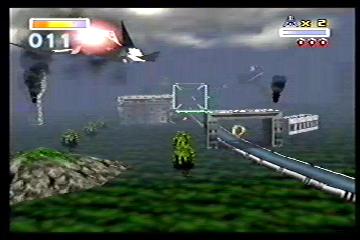 With the SNES version of Star Fox, flight games entered a whole new dimension. With spectacular graphics and an appearance of which hadn't been possible in most games in the past, it really came together for a spectacular experience. That was on the SNES though, and while the game certainly was terrific, it was quite the process to even produce it. With the N64, however, all sorts of new options opened up for the series. Having a more powerful system with which to work, all sorts of new and interesting things could now be done. Taking the core that had been started with the SNES version and building around it, Star Fox 64 added to the base started by that, and expanded on it, coming together to make yet another terrific game.

Star Fox 64 once again has you taking to the air in your Arwing (for the most part), flying off to fight Andross. You make your way through a path of planets, working toward your goal of Venom. You don't just follow along a set path, however, but instead can take a variety of different routes depending on whether you accomplish certain goals in the previous level. Sure, they all lead to the same end, but, some routes are more challenging than others (and trying the more challenging routes, while harder, can also be more fun), and, it's interesting going through the game trying out the different paths.

Gameplay in general takes place with you flying in your Arwing, moving forward, as an array of enemies flies at you from in front and all sides trying to attack you. As the come at you, you shoot at them to take them down. In addition to just shooting normally, you also have the option of "locking on" to an enemy by holding down the button. This takes a bit longer than a normal shot, but with the added advantage that you can be pretty sure it's going to hit the enemy. Another side effect of the locked on shot is that it causes a small explosion around the enemy which, if there are any other enemies nearby, will take them down as well. This can be quite useful for taking out enemies attacking in groups,

While most of the game has you flying along in a straightforward manner, there are a couple of different things which mix things up a bit. In certain areas, your Arwing will enter an "all-range mode," where you'll be fighting an enemy or group of enemies in a confined space. When you hit the edge of the area (or choose to do so manually), you will roll and turn back around, flying back where you came from. In these areas, you have a full range of movement, and will have to work hard to keep your enemy in sight, track them down, and dispose of them.

In addition to the flying sections of the game, there are a couple of areas which have you using a different mode of transportation. While these aren't so frequent that one gets tired of them (and often they're along the more challenging paths, so that one doesn't necessarily need to do them at all), they can serve for a new and interesting look at things. These different stages involve such things as a tank, submarine, or on foot. Again, it won't be too long until you're back at home in your Arwing, so if flying is your thing you won't have to worry about too many of these getting in your way if you don't want them, but, can serve for a fun challenge when one is looking for something different.

It isn't just different vehicles you'll encounter, but a very enjoyable variety to the stages in general. It's not just always going through space surrounded by stars, along the way one will encounter a number of different locations and surroundings as well. One will be flying over water, through lava, and many of a variety of other things along the way. Even among the stages in space, there are some very interesting things one will encounter up there aside from just a random stray asteroid or something. While sometimes it's hard to take one's eye off the constant stream of enemies coming one's way, there are some very nice surroundings to observe. While the SNES version was impressive as well, the N64 version of Star Fox definitely puts the new system's abilities to work to come up with some beautiful effects and designs.

The game doesn't feature any form of saving for your direct progress through the game, so, if you want to beat it, you'll have to do that all in one sitting. One thing it does save, however, is your high score of enemies hit throughout the course of the game. So, even once one has finished the game, one can make goals of going back through the game, trying to shoot down all the enemies, doing combination hits by locking onto enemies, taking more challenging paths to see if there are more enemies down any other sets of stages, and just working against oneself to better one's own personal bests. While that sort of thing isn't really required, and one can go through the game just fine without it, it can be fun, again, if one's looking for stuff to go back and work at after having beaten the game.

In addition to the fun single player game, another thing this game has is a spectacular Multiplayer mode. Here, you and up to three other friends, can compete against each other in some of the different modes of transportation (either all picking the same, or using different ones depending on one's preference), trying to shoot each other down. While there are only a couple of stages to pick from for this to take place, and things are all fairly straightforward, there's definitely a spectacular time to be had with this if one can gather together a couple of people and put in some time with this mode. A couple of the things in the multiplayer mode need to be unlocked before they're accessible, which is nice since it gives one another goal while playing the normal game, but, even with just the standard Arwing, it's very fun just flying around and shooting at each other.

Another thing which Star Fox 64 is notable for having done, is that it's the game which introduced the Rumble Pack for N64. This device, which plugged into the back of the N64's controller, would shake and rumble based on events taking place in the game. If you got hit by an enemy, used a boost or a bomb, or any of a variety of other things which you would anticipate making some sort of vibration, one is going to feel the result of it shaking back at you from the controller. This device not only added a great deal to this game itself, but went on to be used with quite a number of other games, and would work itself into being incorporated directly into the controller of later systems such as the Gamecube.

While it's still enjoyable to go back to the SNES version, and some of the newer versions offer some very interesting things as well, there's still something about the N64 version of Star Fox which keeps pulling one back. Whether it's to try for a higher score, a different path, playing multiplayer with some friends, or just because of how much fun it is to go through the stages, there's always something interesting to do. While it's not the most lengthy game, and there aren't many specific reasons that one would need to go through it all again once one has done it already, it's a game which will bring one back for just a quick couple of levels, a lengthier play through, or just to fool around and have fun. It was a great game when it was released, and, it's still just as much fun even now.