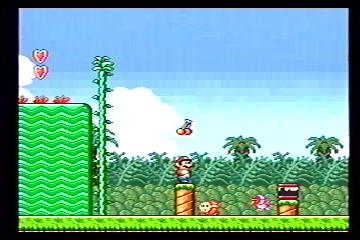 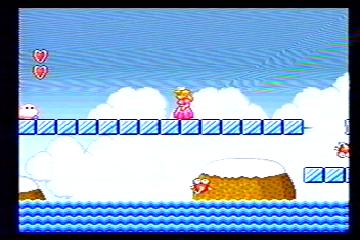 Some people seem to think that just because this game is, in reality, a Japanese game that had nothing to do with Mario at all, that it is automatically a bad game.
Would it have sold as well here if it didn't have Mario slapped all over it? Probably not. Would it even have caught my attention were it not for that? Who knows.
But one thing's for sure, Super Mario Bros. 2, or Doki Doki Panic with Mario stuck into it if you will, was and still is one of my all-time favorite NES games. Sure, none of the features can truely be attributed to anything to do with Mario, but the worlds, the music, and definately the enemies, were great additions to the Mario line of games. After a number of years of ignoring them, many of the creatures from Mario 2 are starting to show up in other Mario games.
Also, the inclusion of 4 playable characters, each with their own unique style, was a welcome addition. Everyone had their favorite, be it the gliding Princess, the quick Toad, the high-jumping Luigi, or the all-around guy Mario. Definately a welcome thing for those people who these days feel that Luigi is getting the short end of the gaming stick, that there's a game where you don't have to be stuck as 2nd player to play as a Mario-clone in a green suit.

Story: 9
Hey, it's a Mario game where the sole story wasn't ''Princess is kidnapped, often moves quickly from castle to castle, and is held by a giant turtle''.

Graphics: 9
Characters that have stuck through the years, and pleasant-looking stages

Sound: 10
Music that even rivals the catchy Mario theme

Overall: 10
This game had everything in it that a great NES game needed, and if one can look past the fact that, yes, it's not really a Mario game, then one will find a wonderful adventure with the familiar faces of Mario and others.