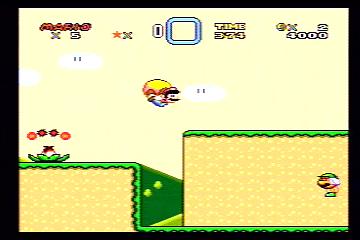 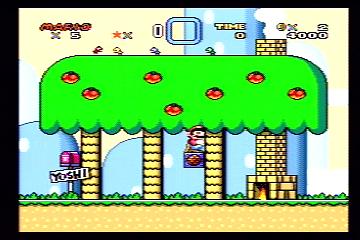 Mario and his friends are away on vacation, minding their own business. Something goes wrong though, and as usual it involves the princess being kidnapped by Bowser.

You have the option of playing either a one or two player game. While Luigi still plays the back seat to Mario (many congratulatory messages, even if you’d done it with Luigi, still say Mario in them), at least he’s out and on an adventure. You have the option to send lives between players as well, so if one player isn’t doing too well while the other has a number of lives, they can send a few over if they want.

The game starts with a message telling you the princess having been kidnapped by Bowser, this time on a place called Dinosaur Island. You find a message a minute later from something named Yoshi saying that all of his friends have been kidnapped by Bowser as well, and that he has gone to find them. You are placed on a map screen, at Yoshi’s house, with paths branching to the left and right of you. Further past those you see outlines of paths that have been grayed out. Moving along a lighted path brings you to a dot, representing a stage that you can enter.

Mario’s standard items of mushrooms and fire flowers have returned, but there’s new things for him to find as well. One of these is a feather, which will give Mario a cape. With this cape and a running start, Mario can take to flight. Once at the peak of his flight, the cape billows out behind him, and with well-placed button taps, you can keep Mario soaring along until something gets in your way; or you could dive at the ground, destroying an enemy below you. If you get an item while you have another one, for instance getting a fire flower when you already had a cape, the cape will move into a box at the top of the screen. You can hit select to cause it to fall from the box and switch what you have, or when you get hit it’ll automatically drop down to you, which is all quite useful.

The main new thing of note is Yoshi. Soon into the game, you’ll come across an egg hidden in a question mark block, and out of it will pop a small dinosaur. He’ll tell you his name is Yoshi, and that while he was out to rescue his friends, Bowser captured him and put him in this egg. Once his speech is done, Mario can now jump on top of Yoshi and ride him. While riding Yoshi, you can make use of his tongue to grab far-off items, eat berries from trees, or hold shells in its mouth. You can also get an extra-high jump off of Yoshi, pressing the normal jump button and then the spin-jump button to leap off Yoshi’s back in midair. This is particularly useful when you find yourself falling to an untimely death, you can leap off Yoshi and catapult to safety, although Yoshi will be lost below. Yoshi also gives you an extra hit to work with, since if you’re hit while riding Yoshi, you won’t take any damage yourself, you’ll just be knocked off Yoshi and he’ll go running away.

There are also four different colors of Yoshi. The normal variety is the green Yoshi, which doesn’t have any specific special ability. There’s the red Yoshi, who, any shell it puts in its mouth, when it spits it back out it’ll come out as fire. The blue Yoshi, any shell it has will allow it to fly through the air with wings. The yellow Yoshi, with a shell in its mouth, when it jumps and lands will cause a cloud to puff out from below it, hitting anything the cloud comes in contact with. The shells also come in these four varieties of color, which also cause these effects. That is, a green Yoshi with a red shell will spit it out as flame. A yellow Yoshi with a blue shell will not only send out puffs of smoke, but will also be able to fly. While you’ll usually only encounter green Yoshis and green shells, these different varieties can prove very useful. Yoshi adds a new element to the game which is very fun and exciting.

At the end of the stage you’ll see a set of poles with a bar moving up and down between them. Pass through these poles and you’ll beat the stage, but, if you leap and hit the bar you’ll get star points, more points depending on how high the bar is. Once you reach 100 points, you’ll be able to play a bonus game. Once you beat an area, you’ll return to the world map, and a new path will be opened to you.

Each of the stages is represented by either a yellow or red dot on the map screen. Ones with a yellow dot only have one way to beat them, but ones with a red dot have two possible ways to beat them. Usually this involves one path which is the “normal” path, and a hidden second path which leads you on a different route. As well as opening up different routes, each different way you beat a stage adds to the number counter that’s next to your file name when you start up the game. That number goes up to 96, meaning there’s 96 combined different ways to beat stages. You won’t necessarily need to beat every stage every way, or even find every one, in order to beat the game, but once you do beat the game, it’s something to try to go back and accomplish.

The graphics are very good, with a wide variety of different lands you’ll come across, from open fields to dark caves to lava-filled rooms, which all look nice. As well, the backgrounds are intricate, with designs that go along with the theme of the area as well as small things going on in them, such as gems on a wall which sparkle from time to time. The music is likewise very good, with many different ones to fit the mood of the area that you’re in. There are also sound effects for everything you’d expect to find them, shells hitting an enemy, you crashing into the ground for the air, or an enemy charging at you.

Once you’re done with the game, there’s a good chance you won’t have been to every area or beaten everything every way possible. While some of the ways to beat stages can be a bit boring, just finding a different path that connects to a point you’ve already connected another way, there are also many ways that lead off to completely new areas you might’ve never seen before. While not necessary to beating the game, it’s very fun to go through and explore all of these different areas, to search around the stages and find out what you’ve missed. Even once you’ve found everything, it’s still a very fun game to just start a new file, play through the areas, and enjoy them.

Super Mario World takes many of the best elements from previous Mario games, improves on those in a number of ways, and adds new things of its own. If you enjoyed previous Mario games, you’ll find many of the elements that made the other ones fun, as well as much more. If you’ve enjoyed other 2D platformers before, this is easily one of the best, if not the best, ones out there.

Full, rich stages, exploration and paths to find, challenge and fun, all mix together to make this one of the most enjoyable games ever.