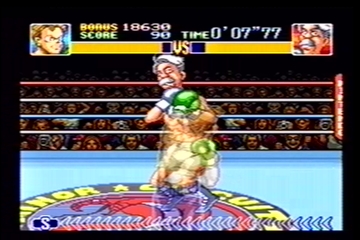 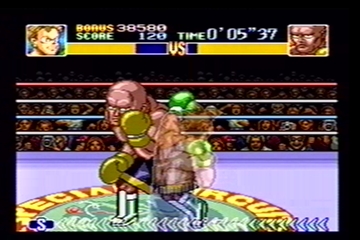 Hey, it's a boxing game where one of your opponents is a guy in a clown suit. What's not to love? If you've ever played the original Punch-Out, you have a good idea what to expect here. If not, what you have here is kind of a standard view take on boxing, with some interesting characters mixed in. As with the original, the characters you're going up against are the main entertainment in the game. This review is going to go on the assumption of one not having played the original, but, if you have, much of this is going to sound familiar. It's still different, and very good, though.

As in the original, your character is stuck to his one spot on the mat aside from dodging to the side or back, no dancing around the ring or anything. You stand in the foreground, semi-transparent so you can see your opponent through yourself. You have a life meter on the top, as does your opponent. When it runs out, you fall down. If you can't get up before 10, you lose. There's a bit more to the rules than that, but, you get the basic idea. Not to belabor the point, but, the main setup of the game is basically what you'd expect from a boxing game. The game is made up of four "circuits," each consisting of four boxers. Beat each boxer to win the circuit. Each time you lose, you lose a life, and if you run out of lives, you have to start the circuit over.

The boxers in the game are really what makes it stand apart from a more normal "boxing sim" type of game. Each boxer has a decidedly different style to them. You have your rotund, slow-moving characters, your quick, fast-moving characters. Opponents who don't like being hit in the face, and old men who will hit at you with their cane. Each character has their own techniques and approaches, and ways you'll have to go about it to defeat them. Whether it's a guy in a clown costume, or a guy who spits in your eye if you're not paying attention, everyone has a different style to them. Likewise, each boxer has certain tactics which will work best against them. Some can be stunned by a series of quick punches, some you'll have to catch off-guard, and some will charge at you like a bull. While it's possible to beat any of the boxers pretty much any way you want, if you can learn their style and what works well against them, things will go much quicker.

This actually leads to one of the small downsides to the game. While some might not necessarily consider it a bad thing, many of the boxers can end up being rather formulaic. For some, it's just a matter of timing a certain punch after a certain move they do, or remembering a certain series of blocks to make, or other such things. If you've played the original, think of nearly every boxer playing like Bald Bull, Great Tiger and King Hippo. While matches can last up to three rounds of three minutes each, every single boxer has some trick to them where they can be beaten in less than 20 seconds. Not that you have to necessarily take that certain approach to them, but, really, if you know a way to beat an opponent in seven seconds, going through a drawn-out match lasting a few minutes often seems unnecessary. While some might find it more enjoyable trying to figure out these combinations, sometimes it is nice to just have a full, normal match of boxing.

Graphics in the game are very good. For once, you actually have a real crown composed of real people, as opposed to just a blur of color. You'll have people jumping around and cheering, taking pictures, and whatnot. Likewise, all of the boxes you fight against look very good, with a varied design and style. Music in the game is alright, the background music to all of the fights are the same, but there are little touches thrown in here and there. Before the fight there's a matchup screen with information about the fighter, and each fighter has their own "theme music" that plays on this screen. As well, the punching and grunting and other sound effects during the matches are good.

One very nice thing about this game, is that it saves all of your statistics. That is, your fastest times against each boxer, your scores and everything, are all saved for you to try to beat another time. You can also quickly go to any round you want, and as well, you can choose to practice against any specific boxer that you want. All of these features make for a game which is very fun to play over many times. Whether you're trying to improve on your score, get a faster time on a particular boxer, or just going through a round or two again, there are many things to do. As well, even if you do know the tricks to the boxers, some of them are not very easy to do, meaning you still might be in for a very challenging fight. Some fighters are definitely very difficult, even with practice.

While it might've been nice for the game to be a bit less formulaic, everything still comes off very well. The fighters are varied and interesting, making for an interesting experience each time you play. The challenge is definitely there, especially if you don't know all of the "tricks" (and some of them aren't too obvious either). The fact that all of the times and statistics are saved definitely adds much more replay value to the game, as, even after you've beaten it many times, it's still fun to go back through trying to beat your personal records. If you liked the original Punch-Out, this is definitely recommended, as it takes the original formula and builds on it. If you like boxing, or other boxing games, there's a good chance you'll like this one as well. Even if you don't really care for boxing or other boxing games, it's still worth giving this game a try. A very enjoyable game, whether you're interested in boxing or not. Even if Tyson isn't there.