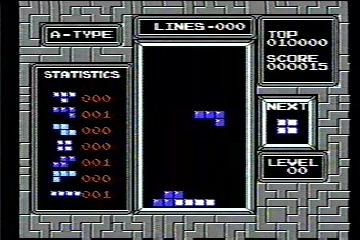 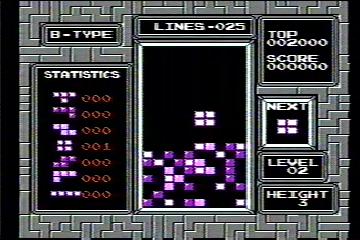 There’s just something so relaxing yet addictive about Tetris that it’s hard to put down into words. It’s a mesmerizing game that just takes hold of your mind.

Gameplay: 10/10
Really, when you stop and think about it, all it is, is blocks continuously falling from above, with you arranging them before they fall to the bottom, trying to form lines. Certainly doesn’t sound like anything special. Really, there’s no logical explanation for why this game is as addictive as it is. For many people, in fact, it really is just that, nothing special. If it grabs hold of you though, it may never let go.
As far as actual gameplay though, what you see is what you get. You play for 2 minutes, and that’s what you have after 2 hours. It’s just blocks falling down. There’s 7 different shapes of blocks, they move down the screen, and when it comes in contact with another piece or the ground, it stops, if it forms a line or lines they clear out of the way, and the next piece starts falling.
There’s two different modes of play, one where you’re just starting with a blank screen and trying to get as many lines as you can without the pile reaching the top. The other mode starts you with some junk pieces scattered across the screen, and you’re trying to clear 25 lines without the blocks reaching the top.

Story: 0/10
Well, there really isn’t any story presented to you in Tetris. Some people have said that the falling Tetris pieces are supposed to represent broken pieces of the former USSR, and that you’re trying to reassemble them into a whole again. Oh no!
In any event, if that story works for you, great. If it doesn’t, make up your own. If you don’t need a story, then don’t worry about it. There isn't any actual story presented in the game itself. It's just falling blocks, who needs to know why they're falling or why you feel compelled to arrange them into lines?

Graphics: 7/10
Well, what are you expecting? It’s a bunch of falling blocks. They look like blocks. Seriously though, the borders around the edge of the game field look very nice, the occasional animations and pictures they have are fun as well, and the menus are clear. Nothing flashy, nothing out of the ordinary, but everything’s there that’s necessary.

Sound: 10/10
There’s 3 different sound settings to choose from in the game, pick the one that suits your taste, personally I like type A best. Assuming one of them appeals to you though, after hours of playing, it really starts to work its way into your mind, you’ll be walking along and humming it without even realizing. You can also turn the music off if you want, leaving just the sound of falling Tetris pieces.

Replay: 10/10
Well, if the game doesn’t appeal to you, you may get bored of it within 2 minutes, not see any point to it, and never touch it again. That’s always possible. If it does appeal to you, however, it’s going to be an addiction.

Overall: 10/10
I suppose the best way to describe Tetris really is an addiction. You’ll be sitting there eating lunch one day, not thinking about Tetris at all, just staring ahead looking at some shelves or a wall or whatever, when, all of a sudden, everything you’re looking at will start looking like Tetris pieces. You’ll imagine them falling. In your mind, you’ll be picturing the best way to move the pieces, rotate them, align them, and form them into lines. You’ll close your eyes and see Tetris pieces forming out of nowhere in the dark. You’ll start hearing the Tetris music playing in the background. You’ll break into a cold sweat... ok, maybe you won’t be quite that bad, but you get the idea.
Years ago, when I was sick and would have to stay home from school, I would literally just sit down in the morning, start playing Tetris, and not a single other thought would enter my mind until people came home again.
I currently own 6 different versions of games with “Tetris” in the title over 4 different systems, although at times I’ve owned as many as 8 different versions on 6 systems (some got lost over time). While some of them have put interesting spins on the original concept, and while some have tried to stay as close to the original as they could, still, nothing beats sitting down with the NES controller in your hands, Tetris on the screen, and the rest of the day in front of you.