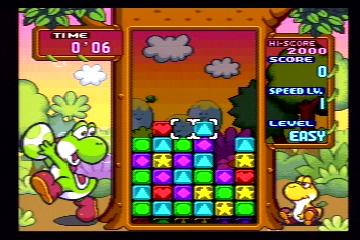 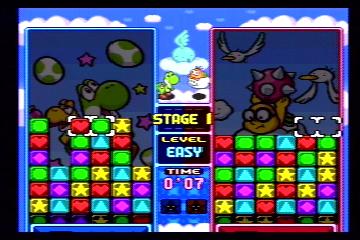 The first thing to note about Tetris Attack is, no, it's not "really" a Tetris game. The origin of the game was a game released by Nintendo for Super Famicom called Panel de Pon. It was a puzzle game, featuring a bunch of assorted characters and whatnot. For the US release, however, it was given the Tetris name, and infused with Mario characters. It's also later seen versions with Pokemon characters, as Pokemon Puzzle League for N64 and Pokemon Puzzle Challenge for GBC. None of that is really all that important though. Whatever one wants to call the game, and whatever characters are featured in it, the only thing that really matters is, this is an amazingly addictive puzzle game.

In Tetris Attack, the goal is simple enough. You have a bunch of different colored blocks, and a little cursor which allows you to switch the position of two side-by-side blocks. When you line up blocks of the same color, they disappear and the ones above it fall down. While you're playing, blocks are moving up from the bottom. If the stack reaches the top, you lose. Sounds easy? Well, it can get pretty fast. Not to mention, the more blocks you clear at a time, the more points you get. You can form combos: for instance, if you clear a horizontal line of blocks, if the blocks from above fall and form a vertical line with the blocks below, you'll get more points from that. When you really get into playing, seeing these possible combinations three or four moves ahead becomes pretty natural.

Beyond the main mode of play, is the Puzzle mode, which is amazingly addictive on its own. In this mode, a particular arrangement of a few pieces is given to you, you're given a certain number of moves you can make, and you need to figure out how to clear all the pieces on the screen in the amount of moves it has given you. There are quite a number of different puzzles, ranging from ones that you'll solve in a few seconds, to ones that can leave you scratching your head for days.

In addition to the main mode in single-player, you can also compete against a friend in multiplayer mode. Here, as you form combos, junk pieces will be sent over to the other player. These junk pieces are basically blocks across the top of the board, which must be removed by clearing pieces touching it, and then they'll turn into random normal pieces. If you don't have someone to play against, or if you just want something else, there's also the Story mode. Here, you're basically making your way through a series of "opponents," who you have to defeat to move past them.

Speaking of opponents, as mentioned earlier, Tetris Attack has been infused with a generous dose of Mario. At the start of each round, you'll be able to choose from a character from Yoshi's Island, such as Yoshi, Blarrg and Raven, to associate with your game. This will determine the background of your screen, as well as sound effects played in certain circumstances, and you'll get to see your character bouncing around happily next to your screen. Needless to say, this doesn't really change the play of the game any, but, hey, it doesn't hurt.

The graphics in Tetris Attack are pretty good for a puzzle game. Each of the pieces has its own color and design on it, which is nice. As well, there are a number of different backgrounds with the characters, which add some nice touches to the surroundings. The different characters to choose from are also fun little additions. The sound works well, fitting the mood of the game, and changing as your pile gets higher or different things happen. There are various sound effects throughout the course of the game, when you get a big combo or garbage is sent to your side or whatnot. The sound effects vary depending on which character you have, each character having its own range of sounds, which is very nice as well.

The story mode gives a nice goal to the game, working your way through that process. As well, the puzzle mode is quite challenging, requiring a good amount of thought on many of the puzzles. Even once you've beaten the story mode and solved (or gotten permanently stuck) on the puzzles, the game is still plenty of fun to play. In particular, if you have some people to play against, the multiplayer mode is a real blast. Even if you don't, though, playing against a computer opponent is still good as well. Beyond that, even just the normal single-player mode remains addictive for as long as one wants. For anyone who enjoys puzzle games, and wants to try something a bit different, Tetris Attack is highly recommended. A very fun game, with a number of different modes, good challenge, and which is very addicting.