Home | Reviews Home Note: There's really no good way to get a picture of a Virtual Boy game. 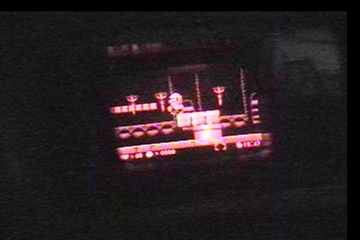 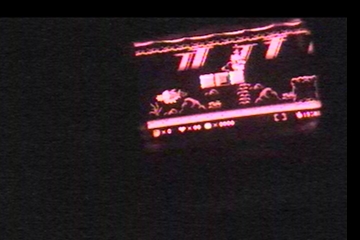 Wario is peacefully sleeping one day, when a creature comes along, squirts him with water, and makes off with a bunch of treasure, hiding it behind a locked door. Wario, being the greedy guy he is, and a bit upset at being squirted with water, wants to get that treasure. So, off he goes to look for the keys to open that door, and collect whatever else he can along the way.

Gameplay: 10/10
Wario Land is pretty much a standard platformer, with a few twists thrown in.
The primary difference is the inclusion of two “planes” of land. That is, there’s a foreground and a background, completely separate from each other, for Wario to adventure in. Along the way he’ll encounter special spring panels which will send him from the foreground to the background, and back to the foreground. Most of the game is played in the foreground, but, there are often things hidden in the background which you’ll have to go back there to find.
Also mixed in there is the inclusion of a number of different hats for Wario to find, which will help him accomplish different tasks. For instance, there’s a bull hat which will allow him to break bigger blocks that he normally can’t break, or a fire-breathing dragon hat, which allows him to destroy special fire blocks, as well as being able to shoot fire off ahead at enemies. Wario starts off as “normal,” getting different hats will grant him other abilities. If he gets hit by an enemy while wearing a special hat he goes back to normal, and getting hit while normal makes him small. Getting hit while small, or falling into a hole or lava or such at any time, results in him dying.
Wario can jump on top of most enemies to flip them over, and then pick them up and toss them, and, also, as long as he isn’t small, he can also charge at most enemies, knocking them off the screen with them leaving behind a coin for him to collect.
Once Wario reaches the end of a level, he moves to a bonus area where he can choose to gamble coins or hearts to get more, or move up from there where his coins are added to his overall total and any special treasures he’s found are added to a display.

Graphics: 9/10
Once one gets used to all the graphics being in shades of red and black, as is the case with every game for this system, the graphics are very good.
The many different and varied environments you explore, from open areas to caves to oceans, everything modeled very well. The multiple planes of play, with scaled graphics as you go into the background. Everything looks very nice.

Sound: 10/10
Excellent sound effects, with varied music for each stage. All of the different stage musics are interesting and entertaining.
The sound and music gets quieter when you go into the background, and louder as you come back to the foreground, giving you the increased impression that Wario is really further away from you now. A very nice effect, drawing one into the game well.

Controls: 8/10
Due to how the system itself works, with you having to place your eyes within a shielded area so all you can see is the game, if for some reason you needed to look down to see where exactly your hands were on the controller, that’s quite a problem. Not that one wants to be looking down at a controller while playing any game, but, with the system in general, if one ever needs to do so, it requires much more effort than just a quick glance down and then back up.
That said, the controls are fairly easy to deal with, and not overly frustrating. The left directional pad moves Wario, with the A button having him jump. If he’s “normal” or has the bull hat, pressing B plus a direction causes Wario to do a quick charge in that direction. The B button has a variety of other effects depending upon the specific hat you have at the moment. Holding in either of the two buttons on the back of the controller while walking causes you to walk at a quicker pace. Start brings up the status menu, and pressing Select while on the status menu brings up the screen adjustment menu.

Length/Replay: 9/10
Wario Land will take at least a few hours to beat. Of course, often times it’s hard to play the system itself for hours on end, so, chances are it’ll take you at least a few sittings to beat. You don’t need to collect everything in the game in order to beat it, so, once you beat it the first time, if you’ve missed stuff, you can go back through to try to be more thorough in collecting things.

Overall: 10/10
Wario Land is certainly one of the best, if not the best, game for Virtual Boy. If you own the system already, you really should get this game. If you don’t own the system already but know where you can get one for a decent price, I could certainly see buying the system just for this one game.
It really is a very fun game, with a decent length and that you’ll want to go back through, even if not to be more thorough, but just to play around.