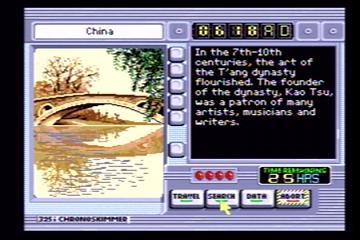 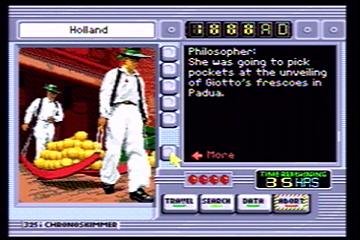 Where in Time is Carmen Sandiego? (SNES)

The Carmen Sandiego series had a fairly regular following over the years on the various PC versions. Much of the reason for this was probably because of its "educational" value, that it was one of the few "games" that were available on many school computers. Given the choice between sitting around watching the clock and this, it was definitely at the top of the choice list. The USA and World versions generally have seemed to be the ones that most people have fond memories of, but, Where in Time is Carmen Sandiego? has the same charm as the others. Of course, that's PC. Over the years, a couple of these games have also found their way to console systems. That's where we find this game, the SNES version of Where in Time is Carmen Sandiego?

You start off the game by heading to your office in San Francisco in 1993. In the office, there are a number of different floors you can visit, with little scenes such as getting a cup of coffee or something. The room that you're interested in, however, is the Personnel Department. Here, you register your name, and sign a release form just in case something "unfortunate" should happen to you. If you have a password from a previous game, you enter it here as well to continue from where you had left off (all saving is done through passwords, but, it's not that bad since the only time you'll need to get a password is after you successfully complete a case, which isn't going to happen every 2 minutes or something, plus, they're only six characters long). Once you're finished with all the preparations, it's time to get ready for a case.

The actual "goals" of the various missions are just comical robberies in various time periods. They will be things such as "Emperor's white horse stolen from Japan, 1950" or "City of Chan Chan stolen from Peru, 900." These are just random excuses to get you zipping off through time, and aren't particularly realistic or important to the case. Regardless, once you've been given your mission, you head off to track down clues on who it was who committed this burglary and where they took the stolen goods. You're given a certain number of hours to complete your case, and, as you search around for clues and travel between time periods, it will mark off hours. If you don't solve the case before the counter reaches 0, you lose.

Each time period has three things that you can examine for clues. There is the Witness, Informant and Scanner. The first two are people who you can talk with, who will give you pieces of information. The Scanner scans the area for an item, and then will give you information on the item which will reveal clues on where the person went. You use the information that you've gathered to discover the next place the criminal went, and then follow on their track. There are four different location/time period sets you can choose to travel to. If you had traveled to the place you are now from someplace else, the place you came from will be one of the choices, and so you'll know they didn't go back there since you were already there. Sometimes the choices have two places that are the same, or two time periods that are the same, and so you'll need to figure out both parts of the information to decide where to go. If all the time periods and places are different, however, simply figuring out the correct time period or the correct place will give you enough information to figure out your next stop. After a number of stops, you'll eventually catch up with the person you're trailing, and be able to capture them.

It's not just about finding out where the criminal went though. You also have to figure out who the criminal is. You're given their gender at the beginning, but, you have to gather further evidence to narrow down who the criminal is from a list of possible suspects. The data information consists of Gender, Hair Color, Eye Color, Artist and Author. (Yes, who someone's favorite artist is counts as legitimate evidence apparently). When examining places for clues of where to go next, if you're examining the Witness or Informant, in addition to clues on the next time and place, they may also give you clues about the person's identity. These clues range from the obvious "They had brown hair" or "They had blue eyes" to clues that require a bit more figuring, such as "They had flaxen hair" or "They enjoyed reading the 'Just So Stories.'" As you enter in this information, it will narrow down the suspects until you're left with the one who it is. If you get to the end and capture someone without enough evidence to prove it was them, you'll have to let them go and fail the case. Often using the Scanner will give you a very obvious clue as to where to go next, but, since it doesn't give you any evidence as to who the person is, if you keep using it, you'll get to the end without any information.

Each time period you visit, when you first arrive, shows you a picture from the area, as well as description of the time and place. The pictures it shows are fairly interesting, and look nice enough. On the other side, you have the display of your time traveling device which you use to gather information. Nothing fancy, but, it works fine. When you're on the correct track of the criminal and arrive at a new location they visited, you'll see a little animated scene with a "suspicious character" doing something like poking their head out of a barrel or shooting a gun at you or something. Again, there's nothing really exciting going on there graphically, but, they keep things interesting. As far as sound, however, the game has no background music whatsoever. There are little sound effects when your device is processing information or when you're traveling to a new place or such, which at least tell you that the game isn't on mute or something. Still, there's really not much to speak of as far as anything sound-related goes.

The main idea of the game is fairly straightforward: Use clues about history and geography to track a criminal through time, while gathering evidence about who they are. There really isn't any getting around the fact that, if you aren't good at, or don't enjoy, historical information, you're not too likely to have an enjoyable time with this game. There are also the evidence clues on artists and authors, but, it's not always necessary for one to be an expert on these two areas as well, often one can get enough information just through the straightforward hair and eye color clues. Still, those are yet more areas where, if you're familiar with those topics, it will help your enjoyment of the game. If you pay attention to the introductory information it gives you when visiting the different places, one can use that to build up some knowledge about the different times and places. Still, randomly traveling around to different areas just to learn information about them probably isn't going to be overly exciting. So, really, the main thing that's going to play into your enjoyment of the game is how interested and knowledgeable you are about history and the related information.

Even for someone with a good knowledge of history, the game still provides a decent challenge. The time limit that it gives you to track down the criminal definitely makes things very tight. If you travel to the wrong period, the time it takes to travel back to where you came from and then to the correct spot is very hazardous. Even if you make all the correct steps, if you need to use all three pieces of information at every stop, it's going to be very tight. Not to mention, if you go too quick and don't talk to enough people to get evidence on the person, you might find yourself at the end without enough information to pin it on the correct person. While, if you find yourself in that position, you can always just try putting in some random information, going with the person it gives you, and hoping it's correct, that's definitely not the desired situation. So, it's a matter of balancing the proper amount of talking to people to find information on the person, to find where to go next, and making sure you leave yourself enough time to finish off the case.

There are only a total of 16 suspects (and the initial information of gender will cut the list in half to begin with), so, as far as that goes, there's going to be a decent amount of repetition in the suspect selection for cases. Still, there's a very sizable selection of places and paths that your case will take you through, so, the game has a decently high replay value based on working your way through the different clues and areas. Of course, eventually you'll begin to see some repetition there as well, and so know where to go next just based on having seen a particular clue before. Nonetheless, there's enough variety to everything involved where, if one enjoys the core of the game, it will keep you interested in going through different situations enough to keep you entertained with the game for quite some time.

While it's definitely not the sort of game that everyone is going to enjoy, if it contains things that you find appealing, and like the type of game in general, everything comes together to make a rather fun whole. For someone with an interest in history, while it's not exactly the most complex thing out there (many of the clues rely on general information and basic statements), it's definitely an interesting application for the different knowledge bases that it requires. If you've enjoyed other Carmen Sandiego games in the past, enjoyed the PC version and want to have it on a console system, have an interest in history, or just want to try something a bit different from other games out there, it's definitely worth at least checking out.