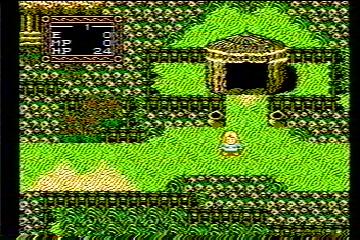 A good more modern comparison for this game would be to compare it to Final Fantasy Adventure (or Seiken Densetsu 1 or Sword of Mana, whichever version of that particular game one has played). In Willow, as you walk around outside of towns, enemies are wandering around on the field. You go up to them, whack them a few times with your sword, they die and you get some experience. As you gain experience, you'll also gain levels and your health and other stats will also increase. This all probably seems fairly familiar now, but this game still does it very well.

The game progresses through a series of towns and outside areas. In the towns you walk around, talking to people, entering houses (which just consist of a static scene inside where you talk to the person inside), and find information. On your journey, you'll also pick up a variety of different magic spells, better swords, and equipment to provide defense. There aren't "shops" or anything like that, all the items you get are either from talking to people, or from finding it out in the field somewhere.

As you head from town to town, the people will point you in various directions, to perform tasks and advance on your journey. One thing that might've been nice in this game is a mapping system, since the game is very big, and it's easy to get lost. Of course, if you're reading this you can also find maps online, but nonetheless. It can be a bit confusing at times to figure out what exactly you need to do or where to go next, but, usually a bit of wandering around can fix that. I suppose the backstory of Willow might make a bit more sense if one has seen the movie of the same name. Or, who knows, maybe it wouldn't. I've never seen the movie, so I can't really judge that. Regardless, the end result is, you're on a mission to defeat an evil person, and save other people (isn't that always the case?) You start out in the middle of your town, wander around getting a sword and some magic, and then head out on your journey.

The only minor annoyance is something that's plagued a few other early NES games (one other that comes immediately to mind is Faxanadu). When technology was sufficiently advanced that companies could make some really long and deep games, but either cost or technology stopped them from putting a battery save in a game, they resorted to password systems. I suppose it beats the alternative of not being able to save at all (Rygar's a great example there), but still. It can be a bit on the annoying side having papers scattered around with various letters and numbers written on them. Nonetheless, that doesn't really concern the gameplay itself, and doesn't detract from the enjoyment of the game.

The graphics in Willow are very good. The towns having a number of houses and other things scattered around, all of which look nice. When you enter a house or talk to a person, you'll enter a screen where you'll see you and the person next to each other, and a close-up view of the person's face. This has the effect of really pulling you in to the conversation you're having. As well, there's a good variety of enemies you'll encounter, which all look interesting as well. Sound is rather good, the best aspect being that it changes often to fit the mood. That is, if you're walking around outside, it will have a relatively calm tone to it, but when an enemy enters the screen, the pace will quicken. There isn't too much variety in the music, but, the use of what's there makes it stand out.

Even without having ever seen the movie (so, again, I don't really know how the story connects to that), the story in Willow is very good. In the towns there are many people who you can talk with, who have interesting dialog to share with you. The adventure is very lengthy, and will take you through a variety of places. Again, this is made a bit annoying by the password system (you only get a password when you die, and certain things such as experience points go down to plateaus as opposed to the exact number), but still, it's manageable enough. You'll definitely be interested in the places you are going, and what you are doing, even if you may feel a bit confused from time to time.

The high point of Willow is the gameplay. The blend of RPG statistics and equipment, discussion and town areas, and action outside, work very well together. While a few other games since have taken a similar approach, this game still plays extremely well even compared to newer games of similar style. Again, the main down sides to the game are the lack of maps, and the use of a password system, but neither of these serves to dampen the enjoyment of the game. None of the small nagging things mentioned in this review (battery save, maps, whatnot) should serve to obscure the main point, which is that, this is an excellent game. If you like RPGs with a bit more action going on, or adventure games where you get to explore and delve, or just fun and enjoyable games, Willow is definitely worth at least checking out. For those that it appeals to, it's one of the best games out there.