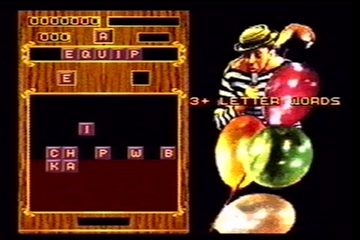 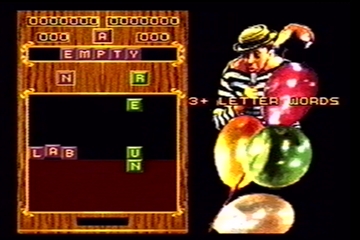 Scrabble and Tetris. Sure, why not? Wordtris combines some of the best elements of both, into a game which is amazingly addictive. The basic setup of Wordtris is, gameplay takes place in a tall rectangle, similar to a Tetris field. From the top, individual letter blocks drop down, one by one. In the middle of the rectangle is a dividing line. When the letter hits this line, it'll stop there. If you drop another letter on top of a letter on this line, the bottom letter sinks below the line. The stack will continue to sink until the bottom letter hits the bottom, at which point additional letters will begin to stack up to the top. When a pile of letters hits the top, needless to say, the game is over.

The goal of these letters, is to arrange them into words, 3 letters or longer. You can arrange words horizontally or vertically, and they can be anywhere on the board (that is, it's not like they just have to be on the center line or something. That's just sort of a reference point for the pieces). When you make a word, the pieces disappear, and things will drop/raise toward the middle. The longer the word you form is, the more points you get from it. As you progress, the level will increase, with which the speed the letters are dropping will increase as well. There's also a "bonus word," that it displays above the playing field. Spelling out this word will cause all letters to be cleared from the board. Definitely very helpful when things are starting to get messy. In addition to the letters being dropped, there are a few other special pieces that will be dropped: question marks, which turn into a random letter once they land, and pieces like bombs and such which you can use to destroy an unwanted letter on the board.

In addition to the main single player mode, there are also a couple of different multiplayer modes. In one, the players take turns alternating going through levels, building up as much points as they can. In another, players work cooperatively on the same board, both dropping letters to make words. Also, there's a mode where players compete separately on the same board, each with different colored letters, trying to assemble words for themselves at the same time. These modes are all very interesting, and fun if one can find some other people to play with.

Graphics are fairly bland. Basically, just falling letter pieces on a board. There are little designs off to the side, but, nothing really of much note. As well, music isn't really anything to speak of. It's not as enjoyable as the classic Tetris music, but, it works fine as background music. They're not bad, they don't detract from the game or anything. Just, they're nothing too fancy. Neither of these areas are places where the game took particular concern, the main focus is on the gameplay.

The only real downside to the game is, it doesn't have quite the addiction factor that Tetris does. That is, it's not really the type of game you can sit there for hours on end playing. Since it does require much more active thinking on your part, coming up with words and everything, it can get tiring after a bit. Ideally, it's probably best played in 20 minute intervals, a couple of times a day, but not really much longer/more often than that. Which isn't to say it's bad, of course. Just, it's a different style of play from many other puzzle games. Still, in short bursts, it's quite enjoyable.

Essentially, though, that's the core of Wordtris in a nutshell. If you like Scrabble, if you like Tetris, there's a very good chance that you will enjoy Wordtris. It combines the excitement of Tetris, the arranging of different "pieces" and their placement and management, with the thinking and letter arrangement of Scrabble. If you're good with words, this will put your mind to the test, as you try to think up the best words you can, while the pieces continue to drop faster. If, however, you're not too good with words, or just find them uninteresting, there really isn't much way around it, you're not going to like this game.

There's not much in the way of frills. There is the multiplayer mode, which is nice. Aside from that though, the graphics and sound are nothing much to speak of, there aren't really any different ways to play or mix things up or whatnot, nothing too fancy like that. Just the main game, and what you see is what you get. Again, it's not something you're going to play for hours on end or anything. Still, it is something that's fun to pick up and play a bit here and there, for a bit of active thinking to go with your puzzle game. For those who like word games, and like puzzle games, it's an interesting meeting of the two. Something that you're not likely to see in any other game, and definitely worth at least checking out if it sounds at all interesting.