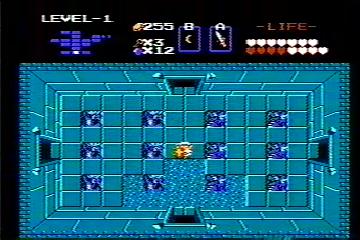 The Legend of Zelda was certainly a new and different type of game at its time. While there followed a flood of games that tried to imitate the feeling that this game had, nothing, even years later, has come anywhere close to it. It’s not just a feeling either, it’s not just that it was new and different. At it’s core, it was a great game then, just as it is now.

In The Legend of Zelda, you are Link, and you’re heading off to save the princess Zelda who has been kidnapped by the evil Ganon. Ganon is trying to steal the three Triforces, magical triangles that bestow power on whoever has then. Zelda had taken one of the Triforces and broken it up into eight separate pieces, and hidden them in various places. You head off to find and assemble these pieces, and then challenge Ganon.

Basically all of the gameplay takes place from an overhead view looking down at your character on a map screen. The world is broken up into a number of smaller screens, which have many things going on in them, enemies and doors and hidden things. You can scroll around some within each individual screen depending on how it’s set up, and when you move to the edge and past it, you’ll move over to the next screen. The enemies that are on the screen will move toward you or fire stuff at you to try to attack you. You’re given a sword to start off the game, and along the way will pick up other items capable of causing damage to enemies. You defeat an enemy, and once dispatched they may leave behind an item, health, or rupees. A rupee is the form of currency, used at shops throughout the game to buy a number of different items. Each shop that you come across, hidden at various places, will contain up to three items each with a listed price. Some items get used up as you use them, such as bombs, while other items, such as a boomerang, once you have it you can use it an unlimited number of times. You’ll also collect other things, such as a raft, which will be automatically used when you reach certain points, or a ring to reduce damage which is always in effect.

The world map is expansive and varied. There are many areas for you to explore, with many interesting themes to them, such as a desert or a graveyard. Some areas won’t be accessible until you find certain items. You’ll also come across other things, such as hearts or rupee bonuses hidden on the world map. In the course of your travels you’ll run into a wide variety of enemies, who have different attacks and movements and ways for you to defeat them.

Each of the eight Triforce pieces have been hidden within a dungeon. You see the entrance to the dungeon from the world map, and when you move onto the entrance you enter into the level. Each level is made up of a number of rooms with doors or other passages leading between them. You’ll make your way through the rooms, fighting off enemies, often discovering a new item, and then defeating the level’s boss. At the end you’ll gain a heart, adding to your overall life total, and get the piece of the Triforce. Once you have collected the eight Triforce pieces, you set off to Ganon’s lair to defeat him and rescue the princess. Once you do, the credits roll and you get all the spoils of having beat the game... until you find out, that isn’t the end.

If the game ended right there it still would’ve been great. It’s very long, and you’ll certainly feel like you’re deserving of a job well done at that point, to head home with your princess, sit back and relax. That’s not to be, however, as just when you think you’ve completed the game, you discover you’re only half way done. You still have another whole Triforce to complete, which has also been broken up into eight pieces and hidden. So, off you go yet again. In your new quest, you start back off as you had to begin with, with no items or other things to your name. The overworld is basically the same as it was before, what has changed is the placement of the levels and the level makeup itself. That is, while you’re still exploring the same world and trying to get the same items and such, you’ll have eight completely new levels to find and complete. It’s almost like having two full games in one, as all of the new levels are just as challenging, if not moreso, than the original eight. Once you’ve found the eight other pieces of the Triforce and defeat Ganon for good this time (at least for this game), you’re at the end, and can finally enjoy your rest.

The game mainly consists of just walking around on a map and defeating enemies and finding things. The enemies are varied and you’ll be able to use a number of methods to defeat them - be it walking up to them and hitting them with your sword, shooting them from a distance with an arrow, or placing a bomb near them and running away before it explodes - and all provide a good challenge. You can get some items from enemies, but most you’ll end up buying at shops. While you usually don’t have more rupees than you could possibly need, you also won’t find yourself spending too much time just wandering around killing things trying to collect rupees because you really need them before you can do anything else. A good balance between not too many and not too few. Dungeons are laid out in a maze-like manner, and while you won’t spend too much time wandering around lost wondering where to go next, you also won’t be breezing to the end of most levels without giving it a thought. Even once you get the map in each level, which shows you the complete layout of the dungeon, you’ll still have to figure out how to get from one room to another, whether it’s through bombing a hole in a wall or finding a hidden staircase or whatever.

Graphics are very good, with a number of varied land patterns, as well as detailed and interesting enemies. There are really only two main background musics that you’ll hear, the overworld music and the dungeon music. While there are a few exceptions to this, you’ll generally have to get used to them. They are both very good though, giving a strong feeling of adventure and exploration. Sound effects are fairly basic, just small noises when you get hit, swing your sword, or collect a heart or rupee or such. Everything you’d expect there, but nothing too fancy.

Once you’ve finally completed the game, there’s a good chance the feeling for adventure will still be in you. While the levels and world and everything stay the same, it’s a very fun game to just sit down and play for a few minutes, or get into for a few hours. Wandering around, exploring, defeating enemies and getting rupees, completing levels, it’s all just as fun every time you do it. It’s a game that will keep you coming back for more.

While other games have tried to capture the Zelda feeling over the years, and while other games in the Zelda series itself have all done a good job of it as well, there’s still something about the original Zelda, the simple wandering around, using items, and completing the levels, that continues to be fun time after time.

Regardless of any other factor - whether one wants to talk about innovation or originality or how other games have stacked up against it - just looking at it as a game and how fun it is, The Legend of Zelda remains as one of the greatest games of all time.